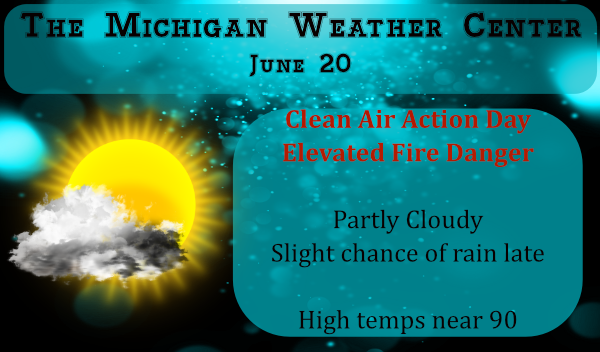 Today at 5:44 PM EDT is Summer Solstice. While many people call this the first day of summer.  Meteorological Summers started on June 1st and this year we already have had several very warm to hot days.

For those of us in the Northern Hemisphere, this marks the longest day of the year and the moment when the Sun reaches the Tropic of Cancer, its northernmost point.  Here at Grand Rapids the sun rises at 6:03 AM and sets at 9:25 PM and the total time the sun is out is 15 Hours 21 minutes and 20 seconds.  The timing of the summer solstice is not based on a specific calendar date or time. It all depends on when the Sun reaches that northernmost point from the equator. The summer solstice can occur anywhere between June 20-22.

The summer solstice is not only the is official start of summer It’s also one of Europe’s most celebrated and spiritual days. In Sweden it is marked by decadent indulgence and rooted in paganism, are some of the most important in this Scandinavian country’s calendar, and which unite Swedes of all ages. Traditional foods such as pickled herring, salmon, and potatoes are enjoyed by flower-wreath-wearing revelers, and maypole and folk dances – such as the Små grodorna – take center stage. It’s even said that if unmarried girls place seven flowers under their pillow on midsummer, they’ll dream of their future husband.  In Norway, enormous barrel bonfires are popular. They also light bond fires in Finland. In England Festivities in pre-Christian times focused on fairies, unicorns and other suitably mystical creatures, until Christianity duly stamped these traditions out. Nowadays, certain areas are reviving these processions and plays, while bonfires are still typical in Cornwall and Ireland. Naturally, Stonehenge sees many druids and pagans coming to witness the perfectly aligned sunrise, too. Bonfires and firework displays are popular in Spain.

The Summer Solstice falls on June 20, 21 or 22 with the 21 being the day if falls on the most. Over the years for the 3 days at Grand Rapids here are some weather records.

If one is to believe the new CPC long range guess it looks like above average temperatures for the rest of the summer and into the fall and early winter season. I will hold judgment on that at this time.
Slim

Phew 91 degrees yesterday and another one today it looks like!

Yes and after today the days start getting shorter that’s awesome we are just about 2 months way from September hard for some to take in on here but refreshing for me!! Let’s keep it going on the heat waves have none the rest of the summer and have a very cold Fall and Winter shuuuuuu…Have a super duper Saturday MV’s best …INDY

Just got back from a nice walk. It is now getting warm and somewhat humid the current temperature here is 74 with a DP of 65.
Slim

Mostly clear and 67 with a DP of 60 here at my house. The low at GRR looks to have been 65 here at my house the low was 64. Yesterday was the 7th day in a row of over 90% of possible sunshine and it has now been 10 days since Grand Rapids has had less the 50% of possible sunshine. One long sunny streak to say the least. Today looks to be yet another mostly sunny day.
Slim

gee, I wondered what happened to the unicorns, now I know why, thanks Slim.
I wouldn’t light fires today in celebration of summer as the ground is dry – today you need a permit to light one.
Yesterday our high temp was 89.1

Thanks Slim! Odd but interesting customs for the solstice. Looks like yet another 90 degree day today for what some are strangely calling a “cool” and refreshing end of Spring/start of Summer.