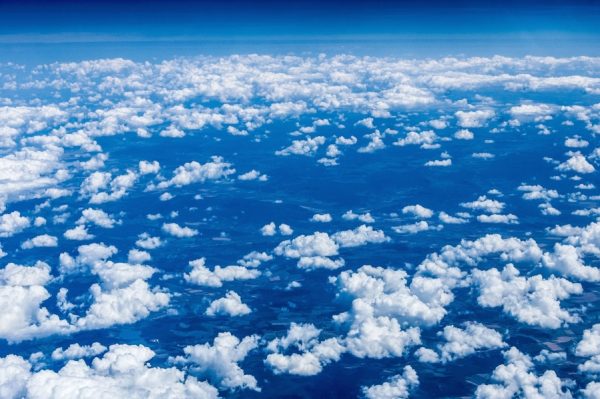 Layers of the Atmosphere

The envelope of gas surrounding the Earth changes from the ground up. Five distinct layers have been identified using…

Each of the layers are bounded by “pauses” where the greatest changes in thermal characteristics, chemical composition, movement, and density occur.

The five basic layers of the atmosphere

Between about 53 miles (85 km) and 375 miles (600 km) lies the thermosphere. This layer is known as the upper atmosphere. While still extremely thin, the gases of the thermosphere become increasingly denser as one descends toward the earth.

As such, incoming high energy ultraviolet and x-ray radiation from the sun begins to be absorbed by the molecules in this layer and causes a large temperature increase.

This layer extends from around 31 miles (50 km) above the Earth’s surface to 53 miles (85 km). The gases, including the oxygen molecules, continue to become denser as one descends. As such, temperatures increase as one descends rising to about 5°F (-15°C) near the bottom of this layer.

The Stratosphere extends around 31 miles (50 km) down to anywhere from 4 to 12 miles (6 to 20 km) above the Earth’s surface. This layer holds 19 percent of the atmosphere’s gases but very little water vapor.

This increase in temperature with height means warmer air is located above cooler air. This prevents “convection” as there is no upward vertical movement of the gases. As such the location of the bottom of this layer is readily seen by the ‘anvil-shaped’ tops of cumulonimbus clouds.

Known as the lower atmosphere almost all weather occurs in this region. The troposphere begins at the Earth’s surface and extends from 4 to 12 miles (6 to 20 km) high.

As the density of the gases in this layer decrease with height, the air becomes thinner. Therefore, the temperature in the troposphere also decreases with height in response. As one climbs higher, the temperature drops from an average around 62°F (17°C) to -60°F (-51°C) at the tropopause.

The atoms and molecules that make up the various layers in the atmosphere are constantly moving in random directions. Despite their tiny size, when they strike a surface they exert a force on that surface in what we observe as pressure.

Each molecule is too small to feel and only exerts a tiny bit of force. However, when we sum the total forces from the large number of molecules that strike a surface each moment, then the total observed pressure can be considerable.

A good example of this is adding (or subtracting) air in an automobile tire. By adding air, the number of molecules increase as well the total number of the collisions with the tire’s inner boundary. The increased number of collisions forces the tire’s pressure increase to expand in size.

The second way of increasing (or decreasing) is by the addition (or subtraction) of heat. Adding heat to any particular container can transfer energy to air molecules. The molecules therefore move with increased velocity striking the container’s boundary with greater force and is observed as an increase in pressure.

Back on Earth, as elevation increases, the number of molecules decreases and the density of air therefore is less, meaning a decrease in air pressure. In fact, while the atmosphere extends more than 15 miles (24 km) up, one half of the air molecules in the atmosphere are contained within the first 18,000 feet (5.6 km). The difference in pressure as height increases

Because of this decrease in pressure with height, it makes it very hard to compare the air pressure at ground level from one location to another, especially when the elevations of each site differ. Therefore, to give meaning to the pressure values observed at each station, we convert the station air pressures reading to a value with a common denominator.

The common denominator we use is the sea-level elevation. At observation stations around the world the air pressure reading, regardless of the observation station elevation, is converted to a value that would be observed if that instrument were located at sea level.

The two most common units in the United States to measure the pressure are “Inches of Mercury” and “Millibars”. Inches of mercury refers to the height of a column of mercury measured in hundredths of inches. This is what you will usually hear from the NOAA Weather Radio or from your favorite weather or news source. At sea level, standard air pressure is 29.92 inches of mercury.

Millibars comes from the original term for pressure “bar”. Bar is from the Greek “báros” meaning weight. A millibar is 1/1000th of a bar and is approximately equal to 1000 dynes (one dyne is the amount of force it takes to accelerate an object with a mass of one gram at the rate of one centimeter per second squared). Millibar values used in meteorology range from about 100 to 1050. At sea level, standard air pressure in millibars is 1013.2. Weather maps showing the pressure at the surface are drawn using millibars.

Although the changes are usually too slow to observe directly, air pressure is almost always changing. This change in pressure is caused by changes in air density, and air density is related to temperature.

Warm air is less dense than cooler air because the gas molecules in warm air have a greater velocity and are farther apart than in cooler air. So, while the average altitude of the 500 millibar level is around 18,000 feet (5,600 meters) the actual elevation will be higher in warm air than in cold air.

The most basic change in pressure is the twice daily rise and fall in due to the heating from the sun. Each day, around 4 a.m./p.m. the pressure is at its lowest and near its peak around 10 a.m./p.m. The magnitude of the daily cycle is greatest near the equator decreasing toward the poles.

On top of the daily fluctuations are the larger pressure changes as a result of the migrating weather systems. These weather systems are identified by the blue H’s and red L’s seen on weather maps.

How are changes in weather related to changes in pressure?
From his vantage point in England in 1848, Rev. Dr. Brewer wrote in his A Guide to the Scientific Knowledge of Things Familiar the following about the relation of pressure to weather:

The FALL of the barometer (decreasing pressure)

The RISE of the barometer (increasing pressure)

These pressure observations hold true for many other locations as well but not all of them. Storms that occur in England, located near the end of the Gulf Stream, bring large pressure changes. In the United States, the largest pressure changes associated with storms will generally occur in Alaska and northern half of the continental U.S. In the tropics, except for tropical cyclones, there is very little day-to-day pressure change and none of the rules apply.

However, since the Earth is much cooler than the Sun, its radiating energy is much weaker (long wavelength) infrared energy. We can indirectly see this energy radiate into the atmosphere as heat, rising from a hot road, creating shimmers on hot sunny days. The absorption of infrared radiation trying to escape from the Earth back to space is particularly important to the global energy balance. Energy absorption by the atmosphere stores more energy near its surface than it would if there was no atmosphere.

The hydrologic cycle involves the continuous circulation of water in the Earth-Atmosphere system. At its core, the water cycle is the motion of the water from the ground to the atmosphere and back again. Of the many processes involved in the hydrologic cycle, the most important are…

Evaporation is the change of state in a substance from a liquid to a gas. In meteorology, the substance we are concerned about the most is water.

For evaporation to take place, energy is required. The energy can come from any source: the sun, the atmosphere, the earth, or objects on the earth such as humans.

Everyone has experienced evaporation personally. When the body heats up due to the air temperature or through exercise, the body sweats, secreting water onto the skin.

Transpiration is the evaporation of water from plants through stomata. Stomata are small openings found on the underside of leaves that are connected to vascular plant tissues. In most plants, transpiration is a passive process largely controlled by the humidity of the atmosphere and the moisture content of the soil. Of the transpired water passing through a plant only 1% is used in the growth process of the plant. The remaining 99% is passed into the atmosphere.

Condensation is not a matter of one particular temperature but of a difference between two temperatures; the air temperature and the dewpoint temperature. At its basic meaning, the dew point is the temperature where dew can form.

Actually, it is the temperature that, if the air is cool to that level, the air becomes saturated. Any additional cooling causes water vapor to condense. Foggy conditions often occur when air temperature and dew point are equal.

Condensation is the opposite of evaporation. Since water vapor has a higher energy level than that of liquid water, when condensation occurs, the excess energy in the form of heat energy is released. This release of heat aids in the formation of hurricanes.

Precipitation is the result when the tiny condensation particles grow too large, through collision and coalescence, for the rising air to support, and thus fall to the earth. Precipitation can be in the form of rain, hail, snow or sleet.

Precipitation is the primary way we receive fresh water on earth. On average, the world receives about 38½” (980 mm) each year over both the oceans and land masses.

Runoff occurs when there is excessive precipitation and the ground is saturated (cannot absorb any more water). Rivers and lakes are results of runoff. There is some evaporation from runoff into the atmosphere but for the most part water in rivers and lakes returns to the oceans.

If runoff water flows into the lake only (with no outlet for water to flow out of the lake), then evaporation is the only means for water to return to the atmosphere. As water evaporates, impurities or salts are left behind. The result is the lake becomes salty as in the case of the Great Salt Lake in Utah or Dead Sea in Israel.

Evaporation of this runoff into the atmosphere begins the hydrologic cycle over again. Some of the water percolates into the soil and into the ground water only to be drawn into plants again for transpiration to take place.