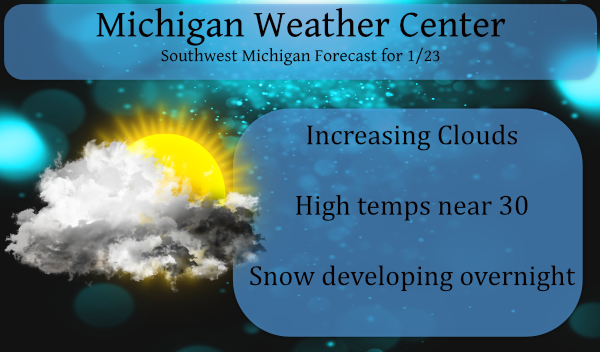 I am still not feeling it with next weeks storm. It looks to me that most of the heavier snow will be south of GR. I will start checking the RDB model runs sometime tomorrow! Stay tuned for later updates!

The NWS seems optimistic about the systems for Monday-Wednesday. Considering that Monday is almost 48 hours out, I’d have to imagine we will be getting some Winter Storm Watch’s tomorrow (if the forecast does not change). I’ll hold off on my excitement until tomorrow… As has happened many times this season, these systems shift quite quickly.

I am with you on not getting too excited. As usual there are lot of variable, however we at least have a chance! Bring it on!

The storm track is still looking great. The only question is how much of this be snow! Bring it on!

Thanks for the comparison of Winters today Slim! No doubt a historic snow drought unfolding for us this winter. Keep the stats and record numbers coming!

Record?…nah. Plan on 10-20 inches for each month of Feb and Mar…routine. Grateful for the “easy” winter so far. Snow does not a winter make…we are frozen, with the cold securely in place.

The official low at Grand Rapids was at least 11° for the coldest low so far this this winter season. This is the 2nd latest into a season for the temperature to dropped below 13. At this time it is partly cloudy and 14 here at my house.
Slim

We do have some hope! Rock n roll will never die!

I agree with Indy, If both events play out there could be a advisory for tomorrow and a watch for the next system. That is because if that plays out they would be the biggest events of this winter so far. And there would be a lot of accidents as many have forgotten how to drive in the snow.
Slim

I have a different view. The snow tomorrow will be such a small amount no WWA needed and the Monday storm is waffling back and forth and will mainly miss GR to the South. Definitely no WSW, but maybe a WWA. I hope it trends North but it does not look that way currently!

9 degrees this morning – I believe this is the coldest morning so far this winter.
I added the NWS discussion to Slim’s post as a preparatory note on the possibility of a storm in the Monday/Tuesday timeframe.