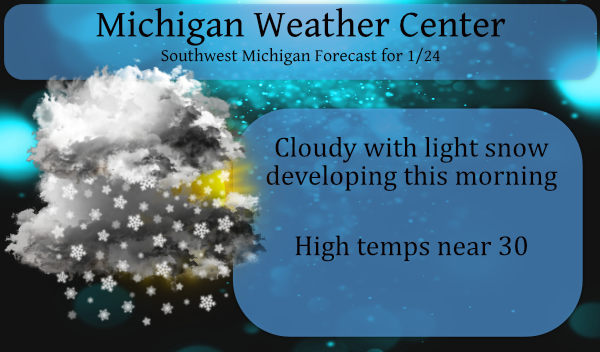 Light snow will develop this morning with the largest amounts in north-central lower Michigan.  Amounts will range from an inch or less along I-94, to 2 to 3 inches up toward through central Michigan. Roads will likely become snow-covered and slick this morning. 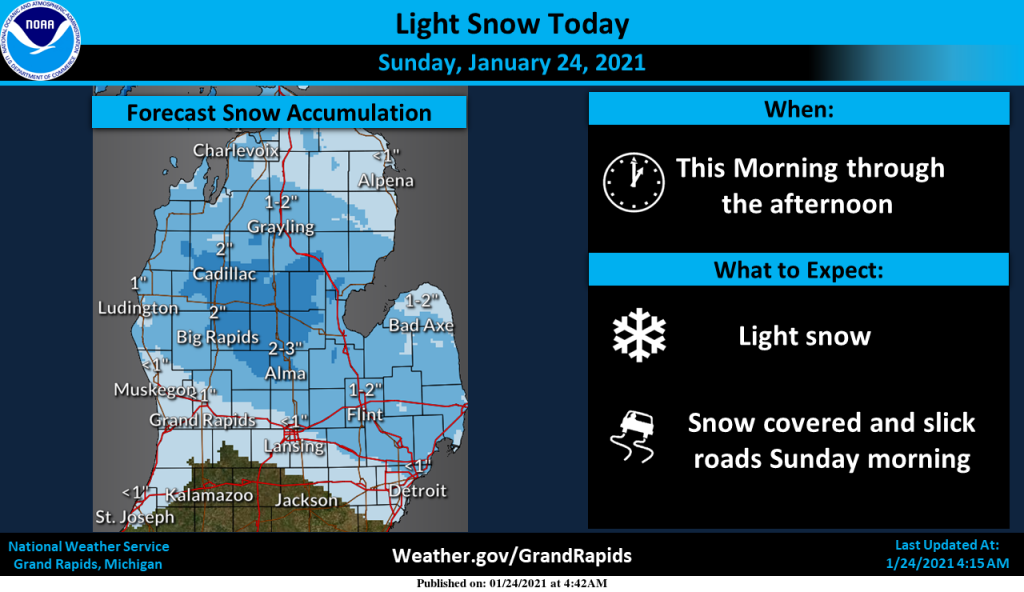 After today’s snow or lack thereof we will turn our attention to tomorrow evening’s system which may bring another three or more inches to southern lower Michigan.  We should see some sort of advisory or warning going up later today or early tomorrow.  At this point, the heaviest snow will be between 196 and I94 though as time moves on this may move north or south.  Below are the model guesses:

>>>>>Breaking Weather Bulletin>>>>> the 00Z of the RDB model shows GR may pick up a whopping 2 to 2.5 inches of snow Monday night! This may be the second largest snowfall of the season! It will be weakening and moving South of GR, so around 2 inches for GR is about it! Stay tuned for later updates, however the trend is not good and on a side note, the EURO mid range model has been atrocious this season!

* WHAT…Snow will overspread the area Monday evening and continue
into Tuesday. Storm total snowfall amounts of 2 to 4 inches is
expected. The greatest snowfall amounts will be over western
sections of Southwest Michigan.

Looking forward to the AFD this afternoon… maybe some watches or warnings will be issued. My *guess* is they will go with 4-7 from 1-96 south and 2-4 to the north.

Seems legit. One of our local mets this morning said it’s too early for an accurate prediction but at this point, he is guessing 3-6″ for here.

Well, Rocky is disregarding public health and safety again by recklessly traveling up north, even though the UK variant of Covid is showing up in Michigan now. Much like Gavin Newsom or Pelosi, Rocky is your typical do as I say, not as I do type of liberal! I guess skiing is essential travel now??

There is also a inch here but the snow has now mostly stopped. It is now 32 here.
Slim

Just stopped here, so I shoveled a pathway and an area out back for our little dog so she could do her business.

Here is some information on thunder snow.

When I live in Bay City and Alpena, I experienced thundersnow many times. I can recall storms in 1964, 1967, 1970, 1973, 1975, 1978, and 1984. I moved to Grand Rapids in the spring of 1984 and in that time while there have been reports of thunder snow, I have only recalled one time and that was just a single flash (note many of the storms above had many flashes) and of course very heavy not lake effect snow falls. If Grand Rapids has a true thunder snowstorm before I die I will let you know.
Slim

The firesh snow falling outside is beautiful on this Sunday morning time to stoke a fire up and get ready for some good football….INDY

As for today, no advisory needed. For the early week storm, it is looking like a possible advisory, no wsw needed! We really need this storm to track farther North than the current guidance shows. The RDB is model will get fired up later this evening once I am back in town! Enjoy winter people, it is the best time of year! Rock n roll will never die!

Trying to remember when the last time was we had no mid 40’s or 50’s and snow on the ground for the whole month of January it’s been a few years I bet we don’t have the big snow numbers yet but outside winter activities have been the best in a long time due to good snow pk cool temps and no big meltdowns fun fun fun let’s keep it going through April thank you mother nature …let it snow let it snow let it snow ..INDY

Yes I am up North again and absolutely great conditions! Who would have thought?