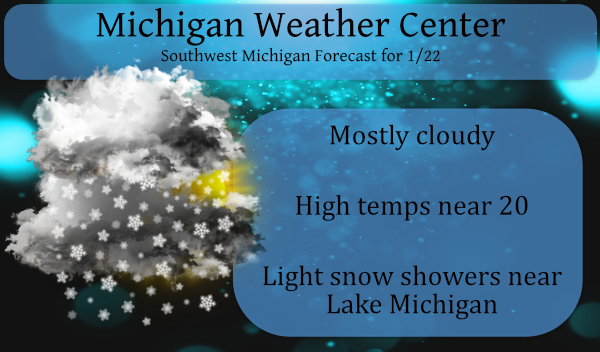 I am sure it has become apparent to all this winter has been much less than normal.  Even if we return to a ‘normal’ snow pattern we will never reach our average snowfall for the season unless we have a couple of major snowstorms and tons of lake effect on top of that which to me seems unlikely at this point.

Storm systems have moved all around us leaving us in the snow drought once again.  The pool of Arctic air has moved over to Siberia and northern Eurasia much of the winter.  We will more than likely see a few winter blasts in Michigan over the next couple of months perhaps into March, however, the Arctic will get to a point where it won’t recover after dumping its cold air over the other side of the world.

Temps will be cold today falling to near 20° with light lake effect snow possible from 131 to the west in the more favored NW snow corridors.  Not expecting much though, perhaps around an inch.

Here is the NWS discussion for the weekend including the possibility of a storm on Monday:

The storm for next week may be moving towards us! Stay tuned for later updates!

CPC outlooks are a thing of beauty today!! Who wouldn’t want warm weather as we head into February?!??!

There is not much ice on the great lakes at this time. There are reports that this is the least amount of ice this late in the season.
https://www.glerl.noaa.gov/res/glcfs/glcfs.php?lake=l&ext=ice&type=N&hr=00
Slim

Only 2.4% in mid-January?? That is pretty amazing.

Bill Steffen predicted 68″ for GR this winter and 85″ for Holland. I think Rocky predicted even more snow than that! Whoops!

You gotta remember, they’re always about 3 feet high on their predictions!!

Another nice winter day and another snowstorm missing us to the South! Incredible!

Talking with some of my friends who plow snow, some of them have been doing it for over 20 years, and none of them have ever seen a Winter like this with just nothing to do. Good news for people who pay per plow, not so much for the plowers.

We cant forget the wind-chills today in the teens amazing winter day get outside and enjoy it I’m going Ice fishing starting this winter weekend out just right ahhhhh Januarys best …..INDY

At this time it looks like most of the snow for early next week will stay to the south of most of west Michigan. Also the updated CPC long range guess is now out and it points to mild but wet? February
https://www.cpc.ncep.noaa.gov/products/predictions/long_range/lead14/index.php
and for the next 3 months it points to a mild and wet? spring
https://www.cpc.ncep.noaa.gov/products/predictions/long_range/seasonal.php?lead=2
Remember to guess for this winter was for a wet with near equal temperature chances for the winter season and it has been mild and dry.
Slim

Good morning. The temperature here is now down to 23 with the colder air now coming in it looks like the high for today will be 33 that was recorded at midnight. There has been a trace of snow fall so far today and a few flurries are still flying around here. This winter so far is truly one for the record books. So far just 9.4” of snow has fallen this winter season. This is the least amount of snow fall that has happened this late in the season here at Grand Rapids. The old record is 11” that… Read more »

Getting to be a lot of long time records to keep track of that are falling! Thanks for all the numbers Slim! Definitely a historic Winter, or lack of, we are witnessing.

40 degrees yesterday and +11 degrees above average! We’ve only seen 10 below average days the past 58 days. Wow!

With just 9.4″ of total snow fall so far one has to wonder it GR will make it to 30″ of snow fall this winter season. And the current low for the winter of 14 is will above the record warmest winter low of +9 set in 1920/21. This is a correction from the earlier reported low of +8 for the 1920/21 winter season.
Slim

Cold outside temps falling today low 20’s with lake effect snow showers can’t make this up another fun winter day in west Michigan get outside and enjoy it!!! Looks like a nice Wintery pattern setting up this coming weekend why not!! Turn the furnace up stoke a fire have a great Friday INDYSNOW!!!