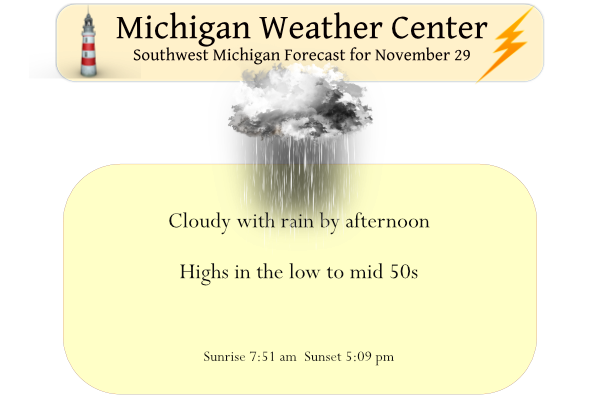 The days continue to get shorter and darkness settles in by late afternoon.  When I lived in Maine in the early 1970s the sun was below the horizon shortly after I got home from school.  Today the sunset is at 4 pm.  I lived in the wilds, a quarter mile in any direction you were in the wilderness so there wasn’t any light pollution like we have here in Michigan.  We had many bears, moose, bobcats, deer, and caribou many of which would come into town at night.

The city of Grand Rapids proclaimed Monday “Bill Steffen Day” to celebrate the career of longtime meteorologist Bill Steffen, chief emeritus for Storm Team 8. U.S. Sen Gary Peters, D-Bloomfield Township, congratulated Bill with a special proclamation.  Congratulations Bill!  For more on Bill’s 48 years in the weather industry go here.  Bill and Gayle are some of the nicest folks I have met and I can vouch for the fact he likes to talk about the weather.

Yesterday’s high was 44° and the low was 29°.  Low pressure will bring rain this afernoon and evening that will change to snow showers by Wednesday morning. It will also become windy Wednesday with isolated power outages possible.

Looking ahead, as we make our way into December a colder wetter pattern will creep its way into SW Michigan.

I’m outside the WOOD-TV viewing area but thanks to the miracle that is the internet, I was able to watch Bill’s tribute. Very nicely done.

We are entering an early December pattern it seems… up and down temps in the 30s and 40s, cloudy, early sunset. It won’t be long before winter sets in again though (which I am looking forward to).
And happy (late) Bill Steffen Day. I think he’s the best meteorologist ever in West Michigan

I lived just south of Alpena for several years in my younger day. It got dark a little later than in Maine as we are further west and more south. But like MV said there was less light pollution. But the thing that I remember (and it is still like that today) were the stars that were out on clear nights. Down there you just cannot see the sky like you can up there. And not to mention how cold it can get on clear calm nights even in the summer time.
Slim

Congrats to Bill and his special day. Yesterday was a typical late November day with an official H/L of 43/32. There was no rain or snow fall and just 8% of possible sunshine. The overnight low here at my house was 37 the official overnight low was 35. For today the average H/L is now down to 41/29 the record high of 65 was in 1998 and the record low of 6 was in 1929. The record snow fall for today is 4.5” in 1960. The rest of this week there will be a brief cool down before temperatures rebound… Read more »

That proclamation is cool. Bill Steffen is a great meteorologist and a great person. I’ve watch Storm Team 8 my whole life and always trusted him and everyone on the team.

I was unaware of the Bill Steffen Day proclamation. That is so cool!