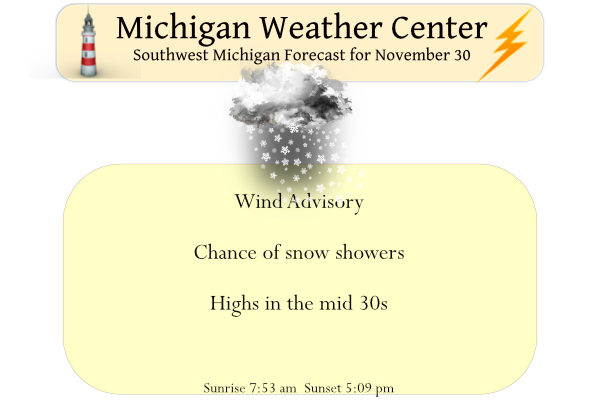 We have a wind advisory for most of the state today until 8 pm.  A weather system moving through the region will bring gusty winds along with snow showers today. Temperatures will drop with icy spots possible on the roadways.  We aren’t expecting much more than an inch of snow.

1989: Severe weather strikes Lower Michigan with downburst winds and tornadoes. A tornado did a quarter million dollars of damage as it cut a six-mile path south of Portland in Ionia County. Another tornado caused minor damage over a three-mile-long path south of Durand in Shiawassee County.

1955: Bitterly cold arctic air is firmly entrenched across Lower Michigan. The high temperature at Lansing is only 15 degrees, after a morning low of 6. Meanwhile, a foot of lake-effect snow piles up at Muskegon.

1929: A month after the great stock market crash, it is the temperature that crashes in Lower Michigan. Record morning cold in the single digits is followed by afternoon highs only in the 10 to 15-degree range.

1960: A strong cold front moves through dropping temperatures dramatically and setting off lake-effect snow showers. The temperature stays in the 20s during the day at Muskegon, after a high of 61 degrees the day before. The freighter Francisco Morazan runs aground off South Manitou Island in northern Lake Michigan during a heavy lake-effect snow squall. All aboard are rescued by the Coast Guard in near white-out conditions.

1998: Balmy weather prevails during the final days of November, with lows in the 50s and highs in the 60s. Record highs today include the 65 degrees at Muskegon, Lansing, and Grand Rapids.

1958: November ends on a frigid note with lows in the single numbers and highs only in the lower 20s. From 6 to 10 inches of lake effect snow piles up near Lake Michigan.

1976: One of the coldest November on record ends with a blast of arctic air that drops low temperatures near zero and keeps highs only in the teens. Big Rapids falls to one degree below zero and Grand Haven measures three inches of lake-effect snow.

2006: A snow and ice storm strikes southwest Lower Michigan. From 6 to 12 inches of snowfall from Muskegon to Ludington, while an ice storm causes power outages and treacherous travel conditions from Kalamazoo to Lansing.

1976: One of the coldest winters of the 20th century gets off to an early start, continuing the persistently cold pattern that began during the autumn. Temperatures plunge to record lows of 11 degrees below zero at Grand Rapids and 2 below zero at Muskegon.

1982: Low temperatures on this day are only in the mid-50s across southwest Lower Michigan, the warmest on record for December. The afternoon temperatures are in the mid and upper 60s. Muskegon hits 64 degrees, a record high for the month of December there.

1998: An extended spell of warm weather occurs in early December with highs in the 50s and 60s the first six days of the month. Record highs are set on this date with 64 degrees at Grand Rapids and 66 degrees at Lansing.

2002: Arctic air and fresh snow cover combine to drop the temperature to 18 below zero at Lansing, setting a record for early-season cold.

On November 27, 1995, a snowstorm hit the Saginaw Valley and continued into the early morning hours of November 28. The storm left Saginaw with 11.1 inches of snow. This was on top of an already cold and snowy month. Saginaw received 23.0 inches of snow! This made November 1995 the snowiest November in Saginaw history and also the 16th snowiest month of all time in Saginaw. Remarkably, in November 1995 Saginaw is the only November to appear in the top 20 monthly snowfalls for Saginaw, Flint, or Detroit.

On November 28, 1991, a winter storm moving through the Great Lakes brought snow, sleet, and freezing rain across the Flint area, leaving 4.4″ of snow by the 28th.

On November 29, 2011, heavy rain fell across much of Southeast Michigan. The rain changed to snow during the evening and early morning hours of November 30. Between 1 and 3.5 inches of precipitation fell which helped make November 2011 and Autumn 2011 the wettest on record in Detroit. This was just another round of heavy rain in 2011 which was the wettest in Detroit’s history and the 4th wettest in Flint’s history.

Also on November 29, 1998, Flint and Saginaw had a two-day period of record highs of the same temperature with the 29th and 30th both having a temperature of 64 degrees.

On November 30th, 2011, a low-pressure system tracked northeast into the Eastern Great Lakes allowing rain to change to snow, with total accumulations of 4 to 8 inches occurring over the Tri-Cities region, Shiawassee, and Livingston Counties. Elsewhere, generally, 1 to 4 inches of wet snow fell. Some of the higher snowfall accumulations that were reported included Auburn and Perry with 8 inches, Midland 6.6 inches, Howell 6.2 inches, and Bridgeport with 6.1 inches.

On November 30, 2008, a snowstorm hit Southeast Michigan and continue into December 1. The storm mainly affected the Flint, Saginaw, and Thumb regions. The heavy, wet snow piled to 5 to 8 inches, downed trees, and power lines, and left about 25,000 customers without power. Some of the higher snowfall totals included 8.6 inches in Marlette, 7.0 inches near Chesaning, and 6.0 inches in Perry.

On November 30, 1999, cold air poured into the Great Lakes, as high pressure moved southeast from central Canada, producing several bands of lake effect snow over Lake Huron. One of the bands to move onto the eastern shore of Michigan Thumb. Measurable snow fell from Huron City, south to Marine City. Heavy snow fell from Port Sanilac to Port Huron, 7 inches accumulated during the morning.

On December 1, 1974, 19.3 inches of snow fell in Detroit. This was the second-highest snowfall ever recorded in the city.

Also on December 3, 1982, Detroit reached 68 degrees, Flint was 67 degrees and Saginaw reached 63 degrees. All are records for the date. This was the second day in a row that all three sites had record highs. This was the start of a very warm December. December 1982 was the warmest on record for Flint, the second warmest for Saginaw, and the 6th warmest for Detroit.

Looks on the cold but maybe dry side.
Slim

The cold is spot on, however the dryness will only be the first couple week! The pattern will be changing big time by the third and fourth week of December! The storm track will be funneled right towards MI! Bring it!

Looks like they are favoring a La Nina setup for December

A few flurries this am but the story for today is the wind. It is brisk and very chilly outside today.

Definitely some harsh conditions out there with the strong wind. Feels like 17 right now… brr

Check out the snow outside what a beautiful thing …INDY

Yesterday was yet another day of well above average temperatures with an official H/L of 54/35 there was 0.28” of rain fall and no snow fall the ground has no snow cover. There was 21% of possible sunshine. For today the high for the day has already been reached at 52 and the current temperature here in MBY is 31. The average H/L for today is 41/29. The record high of 64 was set in 1998 the record low of 6 was in 1958. The record snow fall amount of 6.8” was set in 1940.
Slim

I’ll be curious to see the November monthly stats tomorrow. We had both a record breaking warm-up and cool-down this month.

<<<>>>the pattern will change around mid December to a more active cold and snowy pattern! Mark it down and take it the bank! Get prepared now: tune up the snowblower, set up your plow service, buy your season ski passes, etc, etc, etc! Rock n roll will never die! We are in store for an incredible winter!

It has been marked. While some of the long range hints are pointing to some cold for December at this time they look on the dry side. The updated CPC outlook for December will be out later today.
Slim

I guarantee mid to late December will not be on the dry side! In fact currently I would say GR has a 90% chance of a white Christmas and we have a 95% chance of above average snowfall! All signs point toward a rocking winter? Incredible!