Will it Rain? — The Michigan Weather Center
Skip to Main Content 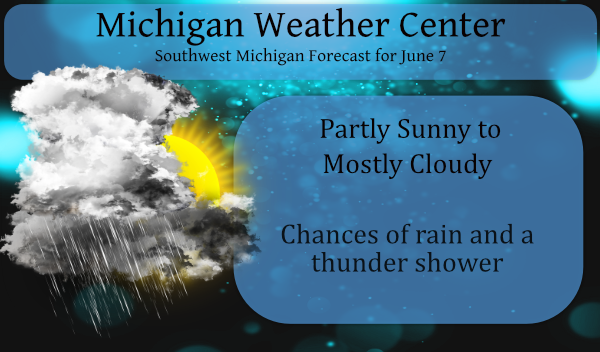 We had an overnight low of 71° after a high of 90° yesterday.  Humidity levels are on the increase making the misery index outside moving into the uncomfortable range. The big question today is will we see some rain?  There are some showers moving through Indiana from south to north, though not substantial the green blob on the radar does bring the hope of things to come.

According to the NWS southern Michigan has a 40% chance of rain mainly this afternoon mainly from popup showers and storms this increases to 60% tomorrow and 70% on Wednesday.  Before we do our happy dance we have to keep in mind the NWS computer forecasts have been bullish on rain for several weeks.

We do have the ingredients in place to make rain possible, maybe even our first summer storms.  Chances appear good to me much of which is explained in the forecast discussion below.

Will it rain? Yes, .6 inches here! Keep it coming!

Had a decent amount of rain here… seems over a half inch but I don’t have an official total.

It now has stopped raining here. Recorded 0.58″ of rain so a rather good amount this go around. At this time it is cloudy and 75 the Dew Point here is now at 69
Slim

Getting a heavy shower now, while not a drought buster it will keep the grass green and growing. It is a warm rain as it is now 77 with this rain.
Slim

Send it this way, would ya??

I recorded 0.58″ of rain and there is a flood adversary out.
Slim

Getting a little light rain here at this time. At this time it is 77 here with a Dew Point of 65.
Slim

“Summer” in the Southetn Arctic. Enjoy it while it’s here, as it takes nine months to arrive, and barely lasts 60 days. Sounds as though the cold could return next week.

Facts baby! Summers are short and winters are long? Get used to it!

Dew point is now up to 71. Anything over 60 is just plain miserable.

It was another fantastic weekend at the lake. The humidity wasn’t bad and with the breeze, it did not feel too hot. The bass were biting like mad. Plus, we saw several painted turtles laying their eggs in the yard. That is always cool to see.

I’m with Mark on this one. I’m over the whole number of 90 degree days thing. We’ve had warm summers with few 90+ days and I’m sure we’ve had cool summers with many 90+ days. It’s an arbitrary mark that doesn’t really mean anything. Especially when we have a lot of 88-89 degree days.

The overnight low both here at my house and at the airport was a warm 73. The DP is up this morning so it is a little more humid then the past few days. While it has been warm this past weekend with the lower humidity and the breeze it has not felt all that bad. I worked on the years yesterday and it was not bad at all. If it stays dry I am sure it will soon change but for how dry and sunny it has been the grass (even in areas that do now water the grass)… Read more »

Remarkably, Traverse City and Alpena have been the hottest with 93, 92 for TC and back to back 94 degree days in Alpena. Wow!

Traverse City gets downsloping with a or south west or west wind and can get very hot at those times.
Slim

Hit 90 here yesterday as well, but this morning feels far worse. The air is just thick with humidity and felt downright awful at 4 this morning already. Not a pleasant day working on tap.