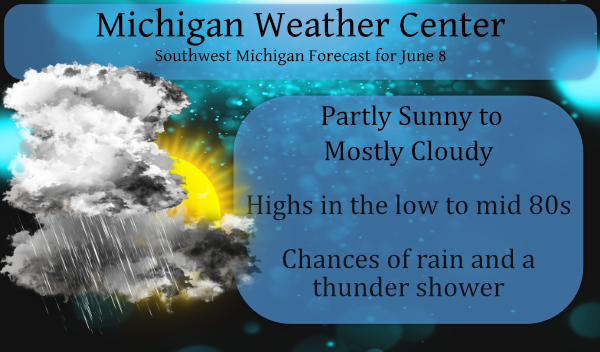 Ten miles away in Allegan they had .73 of an inch of rain which shows the frustration of hit-and-miss showers.  This could make an interesting drought map come Thursday when the CPC updates it.  Of course, we need many inches of rain rather than tenths to overcome the drought in Michigan.

Rain chances will continue through Friday as our moist airmass, thanks to a low-pressure center continues to meander to our south.  Most areas from the I96 corridor to the south have a better than 50/50 chance of rain though they will continue to be of the hit or miss, popup variety.  The SPC has us in the general storm outlook through Friday though we have no expectation of severe weather – having said that perhaps we will have an outbreak due to the opposite of expectations seems to hold true with weather forecasts 😳

It’s great some good down pours are happening across kent Ottawa in Allegan countys let’s hope we get some here in my area soon put to rest the drought mess ….INDY

A little thunder and rain here.

+5.3 degrees above average for the first week of June. Phew!

Thats ok with me just keep the 90’s out of sight starting to see some 70’s show up next week even better!!! Shuuuu!! INDY

Over here about 3 miles north east of Grand Junction had a little under 1-1/2 in yesterday. Thunder and lighting right now.

Nice! If you’re lucky enough to get underneath one of those pop-ups, they’re putting down some serious rain. Only a few sprinkles earlier today. We did get a five-minute torrential downpour late yesterday afternoon. We need some more of that.

Just over 3 tenths of an inch for us yesterday. Sad thing is that was probably our biggest rainfall in a month or 2. Crazy thick air. At one point yesterday the dew point hit 73. Can’t wait till we get some drier air.

I had 0.20 here in Comstock Park. Garden looks happy but would like more. Hopefully today.

Thank goodness yesterdays once calling for a high of 93* degrees never happen I wll take rain and clouds over heat any day of the week but now everything is damp so get ready for mosquito season ….INDY

No 90’s in sight, despite the incessant warm weather hype! Bring on more rain and then a cold front by the end of the week! Who would have thought? Incredible!

Well I believe the term heat wave means hot weather not mid 80’s or uper 80’s….But then again it could be my meds I’m supposedly taking lol….YES no 90’s insite that’s fantastic news thank you!! INDY .

Some terms used by the National Weather Service as to “heat” Heat Advisory Issued within 12 hours of the onset of the following conditions: heat index of at least 105°F but less than 115°F for less than 3 hours per day, or nighttime lows above 80°F for 2 consecutive days Heat Wave A period of abnormally and uncomfortably hot and unusually humid weather. Typically a heat wave lasts two or more days It is ones perspective as to what is uncomfortable. To some it could be 90 to 95 or more to others it might be 85 or even less.… Read more »

Good observation Slim ..let me know when the mid 90’s are coming that’s hot weather in my books I wll agree on calling it a hot wave then .I mean heat wave ….INDY

I recorded 0.63″ of rain fall here at my location yesterday. The heavier rain fall was not widespread the official amount at the airport was 0.46″ at Muskegon 0.08″ at Kalamazoo 0.19″ Holland and to the east at Lansing just just 0.05″ fell. The overnight low here at my house was 67 and at this time it is cloudy with some light fog and 68 with a Dew Point of 67.
Slim