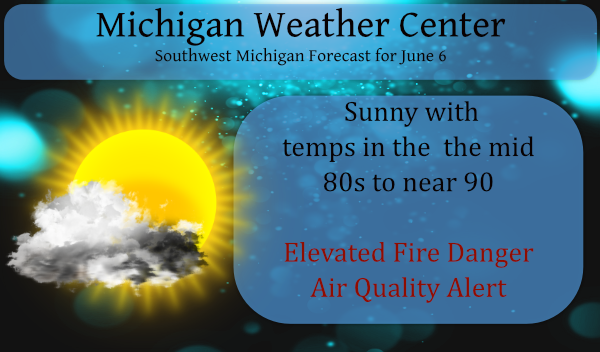 Yesterday we had a high temp of 88° and our low is 66° this morning.  Our last measurable rain was on May 28th (these are Otsego/Plainwell stats).

Below is a graphic of our departure from normal for precipitation this year.  Most of the state is 4 to 6 inches below normal. 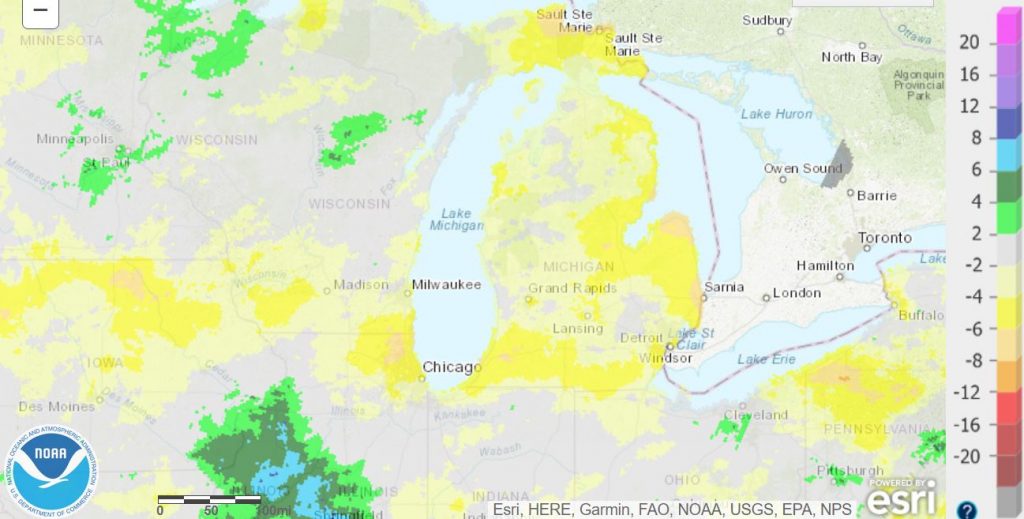 The following is an article from Climate Action written ten years ago.  The article explains why we can have hotter days during periods of drought.

For the first time, a group of scientists has assessed the global connection between soil moisture and heatwaves. They have shown conclusively that precipitation deficits increase the likelihood of hot days, which may help assess heat risks in areas of the world.

The general trend is that if there is low precipitation in the spring, there is more likely to be a hot period in the summer. Water levels in the soil are essential because moist air prevents the atmosphere from heating up as quickly as dry air. Water has a high specific heat capacity, meaning it takes more energy to heat it than it takes to heat dry air. Once the moisture has gone from the soil, however, the temperature will rise considerably.

The study showed that this was most prevalent in the Americas, Europe, Australia, China and Japan. Not only this, but it also showed that the phenomenon has most of its impact during the most extreme temperatures. The probability of these heatwaves occurring doubles in some regions after precipitation deficits.

“We knew that in some regions soil moisture greatly affected the number of hot days, because we had shown this in other studies; for example, in southern Europe. However, we did not expect this to be the case in so many regions,” says Sonia Seneviratne, who co-authored the study at ETH Zurich.

There are exceptions to this trend, however, with the author citing the Swiss summer of 2011, where a dry spring was followed by a wet July and cool August. The increased likelihood of heatwaves is a probability calculation, not a weather forecast, so whilst meteorologists can use this information to improve forecasts, on its own, it can only show a probability of heatwaves increasing.

There is little chance of rain today, we don’t have the humidity or lift mechanisms in place to fire up storms.  Chances tonight through Friday as our humidity rises which may increase the likelihood of popup storms – something we haven’t seen in quite a while.  Gulf moisture will be feeding into the area by tonight so hopefully, we can have chances of much-needed rain over the next several days.

It is great to see that the cpc now gives us normal temps starting by the the end of next week! Incredible!

Despite the constant warm weather hype, GR could not even hit 90 degrees and no 90’s are in sight! What a joke! The warm weather nuts are out of control!

After today’s possible 90* degrees I see the temps have come down the rest of the week with more chances of rain thats the best news of all this Sunday morning!! Loving the 70’s along lake Michigan taking advantage of them this weekend have a good Sunday …INDY

Thanks for the read MV. Hard to break this kind of pattern as it continues to get drier and drier and temps keep going up. Unbelievable high temps yesterday to our west! 100’s in the Dakotas, 97 in Winnipeg up in Canada. We’re only 6 days into June!

Weather patterns in our area tend to change every 45 to 70 days. Some are shorter few are longer. But between now and the end of summer there could be a pattern change.
Slim

To a point that’s true with short term changes. But long term patterns seem to persist for months, even years. For example last year we were stuck in a pattern with a lot of rain all year. Record rain for that matter with the big lake levels rocketing up. Now this year since January it’s been a complete flip. Almost 6 months of near record lack of rain, well beyond 45 to 70 days. Every week we hear the promise of rain and every week we squeak out a hundredth or two of an inch of rain.

Looking far out into the fall, a drought can also impact the leaf change and harvest. But we will worry about that when the time comes (have to enjoy summer first!)

Very good information on soil moisture and potential heat waves. While GR has had a couple of very warm days with highs in the upper 80’s with the wind and lower humidity it has not been all that bad and most felt nice out. And while the air has been on it has not been running all that much yet. We took a trip to the beach at Muskegon yesterday and at the beach area the temperature was just 67 between 2 and 5 when we were at the beach area. About 3 miles inland it was in the mid… Read more »