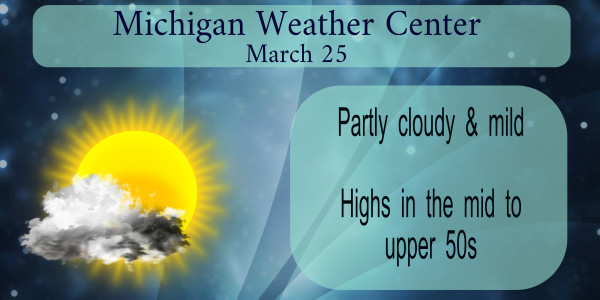 1938: Temperatures soar into the 80s during one of the warmest March days in Lower Michigan. Grand Rapids ties their record high for the month at 82 degrees and Lansing sets a record for the date of 81 degrees.

1956: A snowstorm drops from 6 to 10 inches across southwest Lower Michigan. Jackson picks up 10 inches of snow and Grand Rapids a record 8.4 inches

1901: A tornado killed one person and injured four others in Kalamazoo County as it moved from Vicksburg to Scott.

1904: Tornadoes hit Muskegon and Grand Rapids. In Muskegon, five homes were unroofed or torn apart on the lakefront at Harrison Street. In Grand Rapids, ten people were injured as the tornado damaged a church and several barns.

1954: Heavy rain and high winds occur as a cold front moves through. Grand Rapids measures 2.82 inches of rain for their wettest March day on record. Flooding of streams is widespread and winds gusting over 70 mph causes roof damage and uproots trees.

1974: Grand Rapids falls to one below zero for its latest subzero reading on record.

1934: A record snowstorm began across southeast Lower Michigan with around a foot of snow falling at Jackson, Lansing and Battle Creek. Snow totals dropped off quickly to the northwest with Grand Rapids getting only about an inch.

1993: Dense fog caused a fatal airplane crash at Ludington. The pilot was trying to land in near-zero visibility and collided with trees and terrain on his second approach to the airport. The pilot was seriously injured and his wife, the only passenger, was killed.

1991: A tornado outbreak hits the Midwest, wreaking havoc from Iowa to Ohio. In Michigan, at least seven tornadoes strike. Eighteen people were injured in Calhoun County as eight homes were destroyed there.

1904: Heavy rain and temperatures in the 50s during the last week of March combined with the melting of a deep snowpack to cause some of the worst flooding on record along the Grand and Kalamazoo Rivers. About half the city of Grand Rapids is underwater as the river reaches an all-time record crest of 19.6 feet, which was 2 feet higher than the previous record and 4.6 feet above flood stage. Water covered half of the city and floodwaters reached 2,500 houses and 14,000 people. Many people suffered from hunger and exposure. Several factories and between 200 and 300 businesses were flooded. Loses totaled $1,800,000. Lansing has the worst flood in 135 years of record. Battle Creek is also inundated by floodwaters.

1920: One of the worst tornado outbreaks in U.S. history strikes from Wisconsin to Georgia, killing more than 150 people. In Michigan, at least a dozen people were killed and hundreds of homes were either damaged or destroyed. The worst hit areas in Michigan included Saint Johns in Clinton County, Maple Grove and Orangeville in Barry County, and Fenton in Genesee County.

The first freighter of the season has past through the Soo Locks. Yet another reminder that spring is here.

Where are we getting INDY??

Nice to see the sun this afternoon. We need more sunshine. Haven’t seen it much lately, and it looks like we won’t see much of it in the immediate future either.

We are definitely accelerating into summer now.

Well it close to April I would say Spring like
not quitee summer temps yet but we are getting there ….INDY..

Getting where? Enjoy the weather you have today!

Yes, we are heading towards April and more spring like temperatures. . I am sure that there could be some mild days ahead. But summer will not arrive here until late May and more so into June.
Slim

Lol talking about last year I believe our first 80* degree day was June 9th or so sure was a cool start last summer but nice like it or not we are getting there ….INDY

26* degrees this morning cold ..I’m hopeful we warm up soon overnight I want to get some grass seed down …The sun’s out going to be a great day …We are getting there INDY…

I already put down my first dose of fertilizer. Lawn mower is all prepped and ready to go.