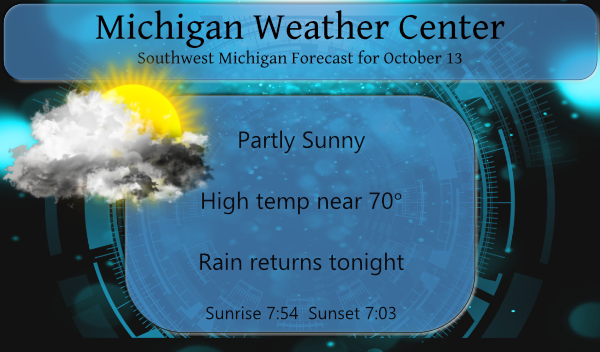 Yesterday we had a temperature difference of 4° between our high and low.  The high was 64° the low was 60°.  According to my digital rain gauge we had .25 of an inch yesterday, I haven’t checked the analog gauge, it is too early to run outside at 4 am.

Today should remain dry with some sun and warmer temps before the rain moves back in tonight with our next system approaching the state.

1879: Southwest Lower Michigan is in the midst of a long spell of warm weather. Lansing rises into the 80s for seven out of the eight days from October 5th through the 12th. This includes the record high of 84 degrees on October 10th, which was preceded by a record 83 degrees on the 9th and followed by 85 degrees on the 11th.

1906: An early-season snowstorm drops 4 to 8 inches of snow from Ludington to South Haven. Temperatures plunge into the teens the next morning, killing thousands of fruit trees, enough to alter the agricultural economy of southwest Lower Michigan.

1912: A late evening tornado hit Gratiot County. Five farms sustained damage along a five-mile-long path. An elderly woman was killed and her son injured as their home was blown apart southwest of Alma.

2006: A record early season snowstorm brings up to eight inches of snow to southwest Lower Michigan. Tree damage and power outages were extensive around Hastings in Barry County as the wet, heavy snow clings to the tree branches, which still had leaves on them.

1975: Record warmth occurred with highs in the 80s. The 87 degrees at Grand Rapids was a record for the date and the highest temperature for so late in the season.

1954: A tornado destroyed an empty schoolhouse at Ashley in Gratiot County. It also took the roof off one house and a porch off of another.

1899: Muskegon hits 86 degrees for their highest October temperature on record.

1944: Cold air is firmly entrenched in Lower Michigan with record lows of 23 degrees at Grand Rapids and 25 degrees at Muskegon.

1943: A snowstorm drops an inch or two of slushy snow across southwest Lower Michigan. The high temperature at Grand Rapids and Lansing is only 39 degrees.

On October 11, 1949, record-high precipitation occurred, with 3.27 inches of rainfall recorded in Detroit.

On October 14, 1989, Detroit and Flint share record highs on this date with 83 degrees and 82 degrees respectively.

On October 15, 1952, Saginaw reports 0.04″ rainfall. This is one of only three days where measurable rain is recorded this October, the driest on record with 0.18″ total. Also for this month, Flint had the 5th driest month on record.

What more rain coming whats new will October end up like September with above normal rainfall?? West Michigan is well on its way!! Soon it will be snow rock n roll on will never die ….INDY

It has been extremely rainy and cloudy lately! Bring on the snow!

How about some sun? Very wet Fall so far!

Guess you forgot about September already which was near record sunshine and very dry. 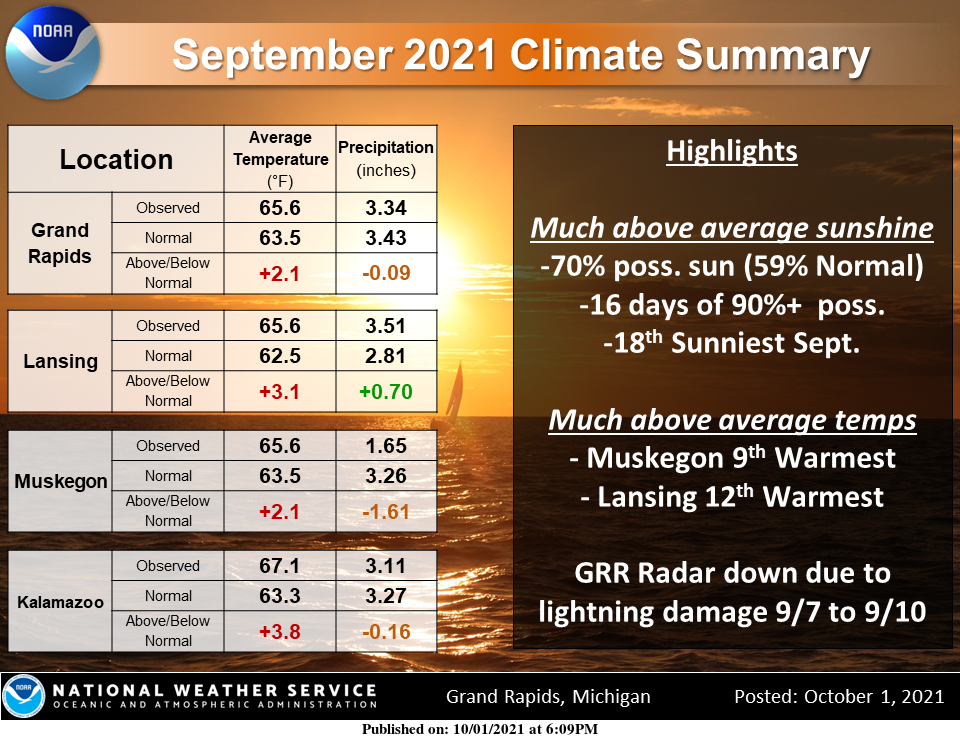 What? It’s been like sunny and warm almost everyday!

Tell me about everyother day it rains lol