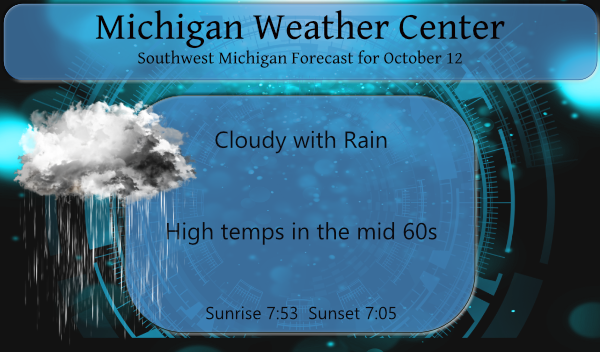 After an extended period of warm weather, we will see a more fall-like pattern developing today with temps in the 60s.  Yesterday our high was 80° and the low was 61°.  We have had 1.10 inches of rain from the low passing through the area thus far which brings us to 2.78 inches for the month with more on the way this week.  It is currently 61° at 6:00 am.  Our normals for this time of year are low to mid-60s.

We will be in an unsettled pattern for the rest of the week with periods of rain and temps in the 60s to low 70s until Saturday when daytime highs will be only in the 50s.

Boy, this was just a couple hundred yards down the road from me. Gotta watch out for them things this time of year.

Oh yeah, dude. They are EVERYWHERE.

Phew, 80 degrees yesterday! +18.2 degrees above average for the day.

81 here. I think I will finally be able to put the cover over the A/C unit.

More rain and temps in the 60’s today love it its been a wet Fall soon it will be snow bring it onnn..INDY

You know it and we could be seeing record cold and snow this winter! All signs point towards a rocking winter! Get ready!

It will be nice to have temps that are more Fall like. I have decided I need to get a rain gage for my house. That was quite the thunderstorm that rolled thru here yesterday evening.