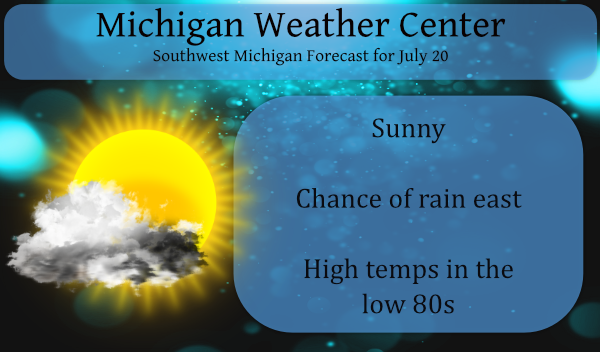 For what it is worth, the CPC is giving us warmer and dryer than normal conditions for the rest of the month into early August.  August is predicted to be warmer than normal with equal chances of above or below normal rainfall.

Rainfall chances today will be well inland probably east of Battle Creek and Ionia.  On the western side of the state, the story will be the increasing winds up to 25 mph which will cause hazardous swim conditions on Lake Michigan.  Our next chance of rain will come late Thursday on into the weekend.

This has to be one of the thicker smoke layers I can remember seeing. Yesterday afternoon the sun was a golden-copper color, and the sunsets the past couple nights have looked really strange. The sun completely disappears about 20 minutes before even reaching the horizon.

I would agree that the past few days has seen some of the most smoke I can remember. So far today there seems to be a little less smoke and there is more blue in the sky. I wonder how much the smoke cut down on yesterdays high temperatures and if it held up the overnight lows the last couple of days. The overnight low here was 63 and the airport the low was 65 at the current time it is 71 both here and officially at GRR with hazy sunshine. Like I said there is more blue than yesterday… Read more »