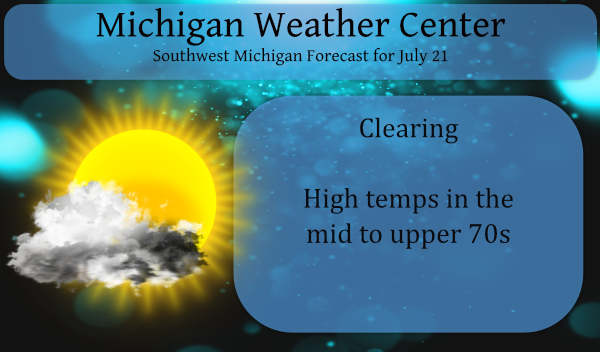 We have a dry and pleasant day in store with comfortable temps and lower humidity.  At 4 am the temp is 64° – yesterday we had a high and low of 83/60° with no rain in Otsego.  Our rainfall total for the month is 2.21 inches.  Our next chance of rain comes tomorrow night on into the weekend.

1952: Thunderstorms with heavy downpours resulted in flooding of basements and some streets across West Michigan.

1894: Temperatures reach 100 degrees across much of Michigan for the second day in a row. At Lansing, the high of 102 degrees ties the record for the all-time hottest temperature.

2009: Cool and unstable air over Lake Michigan spawns at least two waterspouts. One of the waterspouts moves inland near Holland, just north of Lake Macatawa, but quickly dissipates and causes no damage.

1954: Severe thunderstorms produced golf ball-sized hail and damaging winds across West Michigan. In Kent, Ionia and Montcalm Counties, dozens of trees were felled and some crops were wiped out by the hail and high winds.

2003: A tornado with peak winds around 100 mph struck near Battle Creek. It left an 8-mile long damage path and tore a garage from a house. Three outbuildings and a barn were also destroyed. Hundreds of trees were uprooted or broken off. The tornado width was nearly one-half mile wide where the most severe damage occurred.

1934: A brutal heatwave peaks during the Dust Bowl summer with a high of 104 degrees at Grand Rapids, second only to the 106 and 108-degree readings from July 1936. Temperatures reach the mid and upper 90s even right along the Lake Michigan shore.

1983: One person drowned on the Kalamazoo River as a tornado struck Saugatuck then crossed the river, generating a large wave of water.

1953: Severe thunderstorms struck during the late evening as a cold front moved through. High winds downed numerous trees, and several streets in Grand Rapids were blocked by falling trees.

1883: A half-mile-wide violent tornado killed three people as it moved southeast from near Eaton Rapids to the south of Leslie.

1999: Severe weather struck central Lower Michigan, with two weak tornadoes touching down in rural areas. One struck near Mount Pleasant, but only lasted a few seconds and produced no damage. Another brief touchdown was reported during the early evening hours in Tustin, in Osceola County, where it produced minor damage to one home.

1934: Extreme heat continues for the fifth consecutive day with Lansing equaling their all-time high temperature of 102 degrees. Grand Rapids hits 103 degrees, part of a string of five out of six days at or above 100 degrees there.

On July 18, 2011, hot and humid conditions gave way to a batch of thunderstorms, with over 20 reports of severe weather across Metro Detroit. The severe reports included a blowdown with dozens of trees snapped northwest of Monroe with winds up to 80 mph. Unfortunately, there was also one weather-related fatality when the high thunderstorm winds knocked down a power line onto a man in Detroit.

On July 18, 2010, A weak EF0 tornado hit Lighthouse County Park in Huron County. The tornado touched down at 1011 PM with maximum winds of 80 mph. The total path length was estimated at 2 miles, with a maximum width of 75 yards. Numerous trees were blown down, one of which fell onto a camper. Roof damage was also observed at one home.

Also on July 18, 1942, the overnight temperature dropped to only 80 degrees. This is the highest record maximum low temperature ever recorded in Detroit and ties the records set on July 1, 1931, and July 5, 1921.

On July 19, 2020, several rounds of storms moved through the region, spreading from the Tri-Cities area during the morning to the Metro Detroit area by afternoon. These storms caused numerous instances of wind damage throughout the day as well as heavy localized rainfall. The storms resulted in large trees on mobile homes, damage to structures at Willow Run airport, and an overturned semi-truck near Ypsilanti. Over 100,000 customers lost power due to the storms.

On July 19, 1996, a severe thunderstorm came through Flint producing 58 mph winds in the early morning hours.

On July 20, 2019, severe storms brought widespread wind damage reports across much of Southeast Michigan with approximately 610,000 customers losing power. Some of the hardest-hit areas were around Columbiaville where a 72 mph gust was recorded.

On July 21, 2011, the peak of the heatwave was reached when high temperatures reached 100 degrees at Detroit, Monroe, Adrian, Grosse Isle, and Ypsilanti. The 100 degrees at Detroit was a record for the date and was the first 100 recorded in Detroit since 1995. This hot day was in the middle of a stretch of heat that saw highs reached 90 or greater at Saginaw for 5 days in a row, 6 days in a row in Flint and 7 days in a row at Detroit. The heatwave was the longest and strongest heatwave to hit Southeast Michigan since July 1987. It also helps to make July 2011 the warmest month on record for Detroit, the 3rd warmest month for Flint and the fourth warmest month in Saginaw.

Also on July 21, 1998, during the late afternoon and early evening, a broken line of severe thunderstorms moved through metro Detroit as well as Lenawee and Monroe Counties. This squall line produced a wind gust to 75 mph at the Ann Arbor Airport, widespread wind damage across the metro area especially in Dearborn, hundreds of thousands of power outages, and unfortunately, 2 deaths in Woodhaven as severe winds brought down a video store awning. There were also two other injuries at the video store and one injury at Michigan International Speedway (MIS).

On July 22, 1960, Detroit experienced its highest official wind gust during a severe thunderstorm of 104 mph wind at 5:18 pm.

On July 23, 2010, severe thunderstorms moved through areas along and south of I-94. The strongest storm produced a measured 82 mph wind gust near Whitaker. That storm also produced an EF0 tornado along Judd Road between Hitchingham and Whitaker Roads. Maximum estimated winds with the tornado were around 80 mph, with a path length of 0.6 miles and width of 100 yards.

Also on July 23, 1999, Detroit experienced up to 70mph wind gusts with a strong storm that moved on through.

Todays weather is about the best Summer weather we could have here in west Michigan nothing hot it’s beautiful outside!! INDY

Today was beautiful outside!! It couldn’t have been any better!

We now have 20 days of July 2021 in the history books and the mean here at Grand Rapids so far this month is 71.8 and that is -1.0 below average. The high for the month so far is 89 on the 4th and 5th and the low so far is 54 on the 10th There has been a total of 1.56″ of rain fall at GRR and that is below the average of 2.49″ by this date. While there have been a reported 4 thunderstorms at GRR here at my house I only seen lightning in the distance this… Read more »

Had 4 beautiful days in Boyne the weather was fabulous yesterday it was cloudy brezze and cool for the end of July standards loved every second of it the wildfires showed us some fabulous views Sunday and Monday with the sun setting behind the mountains fabulous food and of course sprites the plan was just right!! We will be coming back in January for some Winter fun as always, now I’m looking forward to a 3 hour drive home have a super shine kind of day INDY …..

Sounds incredible and I am sure Boyne this time of year is awesome, however give me Boyne during the winter any day! Can’t wait for the cold and snow! We could be heading for record breaking snowfall this winter! Bring it!