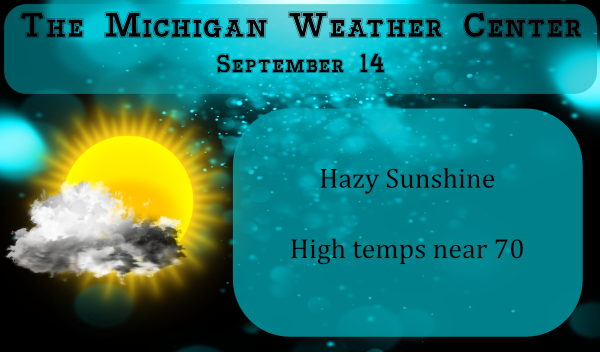 We are looking at a sunny dry period over this week with near-normal temps at least through the first half of the week before cooling back to the 60s the second half.  Looking at the NAM, HRRR and GFS precipitation models I am seeing no rain until early next week.  Tuesday and Wednesday will be the warmest days of this week with temps in the mid-70s.  Low temps may get into the mid to upper 30s to low 40s by the end of the workweek with chances of frost north of I96.

Smoke from the western fires will create hazy milky skies for the next couple days which will create some gorgeous sunrises and sunsets.

Compared to the past couple of years we have had a lot of walnuts falling off the trees.  On Saturday morning it was almost as if it were raining walnuts, I wouldn’t want one falling on my head.  This year they are larger also.  We have a lot of squirrels that bury them in the yard.  We find small holes where they dig them out through the year, the ones they miss grow into new trees.

Five tropical cyclones at one time the Atlantic. Hasn’t happened since 1971. Almost through the alphabet. I believe that has only happened once before, as well.

It feels like a beautiful Fall day outside. It is sunny but hazy but atl least the air doesn’t smell like last night. It is 63 degress here at my place.

Looking out as far as the eye can see lots of 60’s and a few low 70’s no 80’s I’m thinking mookikee was giving us Floridas forcast last week lol…Such a cool Fall we are having the leafs are changing colors about a month or a little less from now we will be at peak…..Feels so fresh outside Fall love it!!…Have a super Monday!! INDY

The departure from average so far this September at Grand Rapids is at -2.6. Some other sites with cooler that average means so far are Flint -2.1. Alpena -3.1 The Sault -4.0 and at Marquette they are at a whopping -6.3 so far this month.
Slim

Lots of 60’s coming up keeping September below average forget the heat ….INDY

51° here at this time with a kind of milky sky that is either smoke or high fog. My guess it that it is smoke.
Slim

The sun set last night had a rather “bronze” tint to it last night. Looked odd but I was guessing it was from the smoke. What a mess out West with the fires!

It looks like another of many below normal temp days! What a stretch!