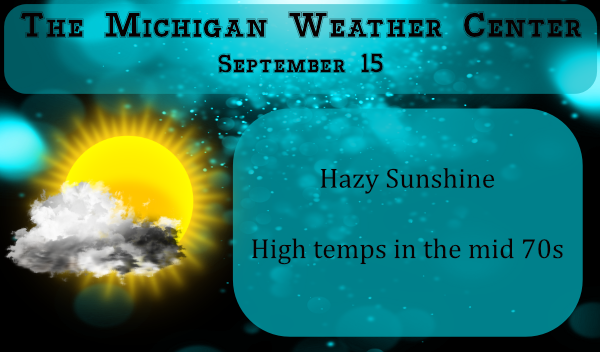 The NWS has been hinting at chances of frost coming towards the end of the week with nighttime temps in the upper 30s to low 40s.  This would be outside the cities and more or less in the lower-lying areas.  Grand Rapids is predicted to be around 43° while Otsego is predicted to be 39° Thursday night and 38° Friday night.  Further north Big Rapids is showing 37 and 35 for the same nights.  In my humble opinion the greatest chances of frost will be better north of US 10 for frost. 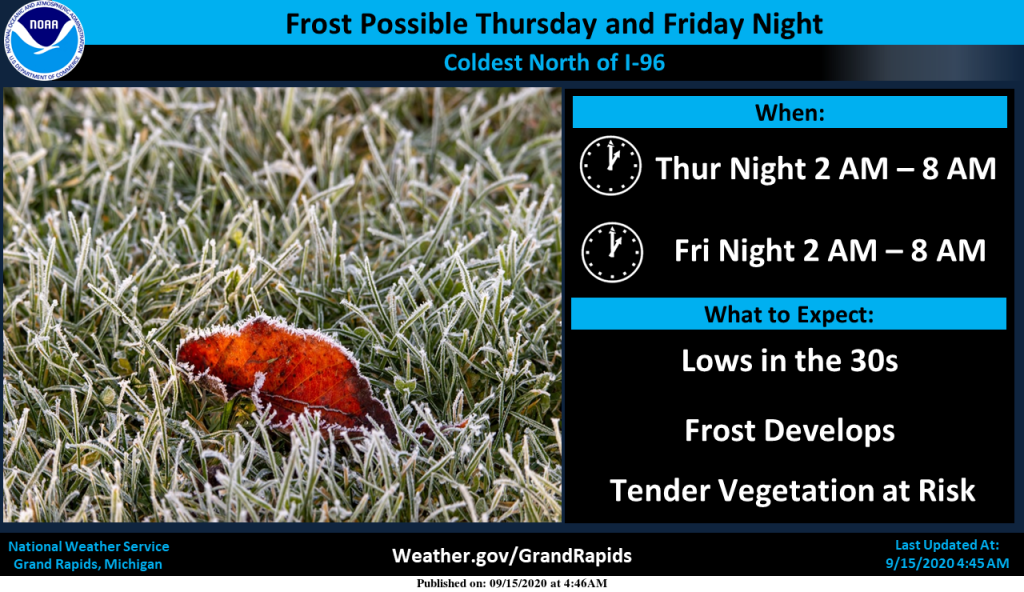 Keep in mind the NWS where I get some of my forecast data has been a bit off temp wise for the past week.  Yesterday it was predicted to be near 75 however due to the smoke from the wild fires out west creating a haze temps were lower.  Smokey skies may still be around today and tomorrow which may once again lower the predicted highs of the 70s today.  We do have a southerly return flow of air moving in today which should help push temps warmer than yesterday.  We have a slight chance of rain Wednesday evening which may bring a few sprinkles.  Our next best chance of wide spread rain may not come until the 25th.

I am glad to see the frost is not here. I have lots of tomatoes to ripen. It’s been an awesome summer for them. I put some Mum plants in this week. I have noticed that alot of the trees are turning colors here. We have noticed the smoke here too to the point I kept windows closed today. Sunday night late the smell of smoke was really strong.

It now has gotten noticeable more hazy in the last couple of hours. Now the sky is a milky white. It is warmer then yesterday and the current reading here is 74.
Slim

The sun is very dim and deep red now and it’s still a ways off of the horizon. Looks very odd.

Get ready for a big cold front by Thursday! Incredible cold!

Loving this below normal pattern we are in 60’s as far as the eye can see who would of thought ?? The leaves will really be changing fast in the coming weeks with the cool temps love it ….INDY

Early Frost who knew well it is the middle of September it can happen it’s called a below average pattern folks “weather terms” we shut the windows again overnight I told my wife the furnace maybe kicking on this weekend lows in the upper 30’s lower 40’s blow the dust of the winter coats it’s time ..Have a beautiful FALL day …INDY

The sky is still smoky today but not as bad as yesterday. The overnight low here at my house was 48. At this time with hazy skies the current temperature is 57.
Slim

We had to shut our windows last evening because the smell of smoke was strong.

The smoke has sent a big portion of the country into an artificial cool down. Really unique weather right now.

On that same topic, Bill usually tries to minimize western fires as no big deal and not a result of climate change. But I haven’t seen him even mention the fires once this year. With all the record temps and drought, I think we all knew a devastating record-breaking fire season was coming soon. It’s so sad. I read that breathing the air out west is the equivalent of smoking 22 packs of cigarettes a day.

For sure that smoke is not good for anyone. You know in the past there have been huge forest fires here in Michigan. There was one that burned all the way across the thumb. Just something to think about that it could happen here as well.
Slim

Yes, the smoke is an outside event caused primarily by man that has now influenced our weather.

“Weather terms” below average pattern we have been in now for over 2 weeks …Not sure fire smoke has anything to do with good try though….INDY

I’ve read several articles on this, definitely has been a warm year all over.