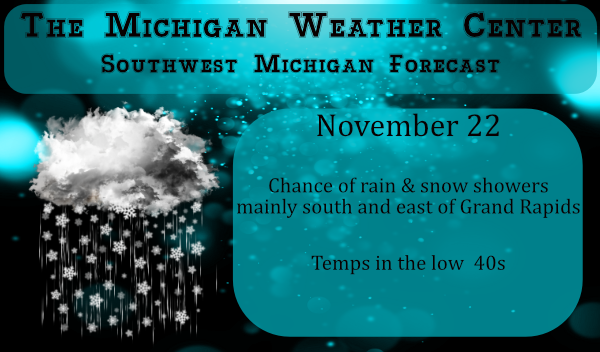 Today I am going to look at the comparison of snow amounts in the CONUS (continental U.S.) over the past few years.  We have a Winter Weather Advisory in the extreme S.E. of Michigan until 8 pm for up to four inches of snow which includes Detroit, Jackson and Ann Arbor. 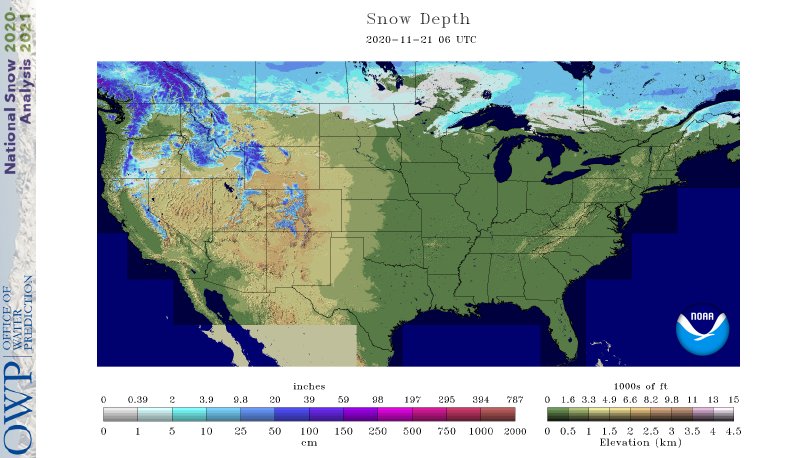 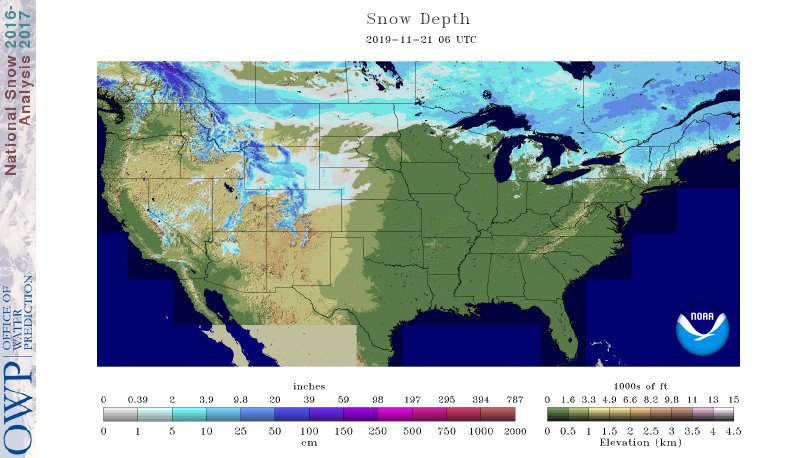 This is the current snow cover as of yesterday (left image) mainly in the Rockies and extreme northern CONUS compared to this time last year (right image or bottom image if you are using a tablet or cellphone).  Next are 2017 and 2018 respectively. 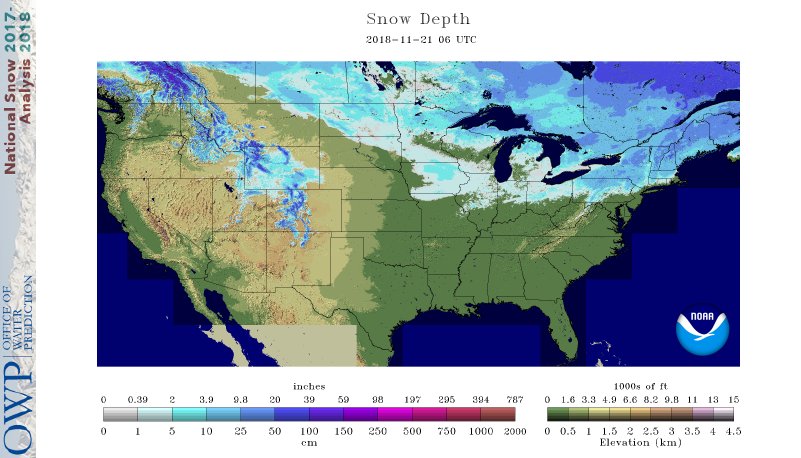 And next for your amusement are 2015 and 2016.  I am not assuming any particular analog that may appear to be close to what we are showing here, just showing that November can be snowy or not – keep in mind winter hasn’t officially began yet. 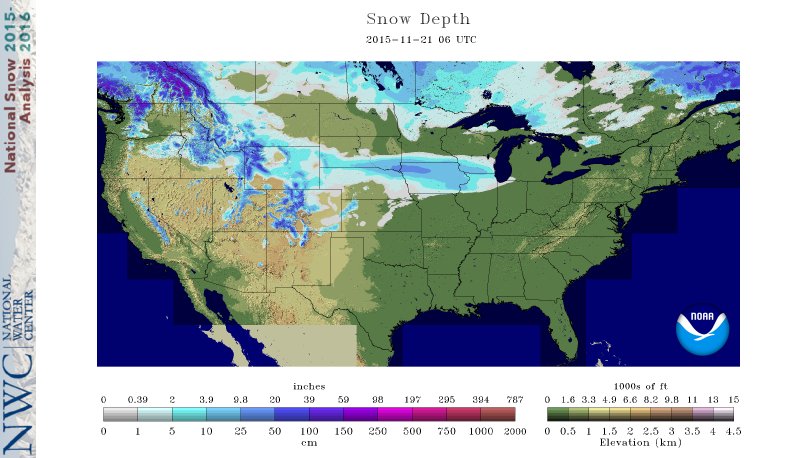 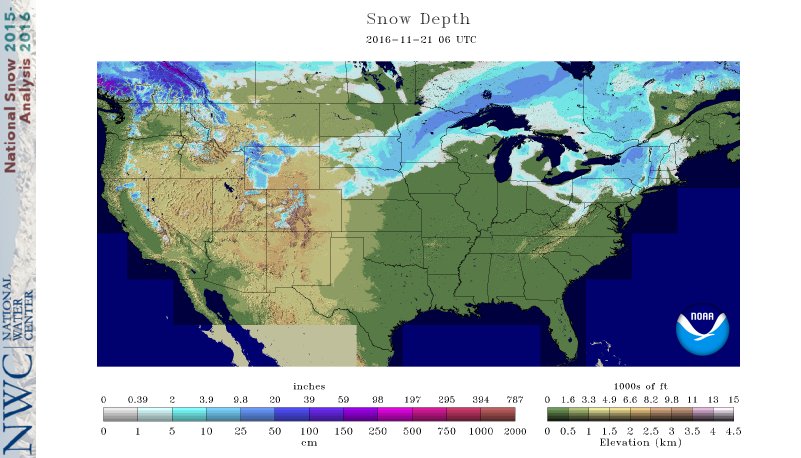 Now we look at current northern hemishphere snowcover for last year and this year.  The Hudson Bay is showing a little more ice than last year but less in the Arctic.

Thought these would be interesting to look at and as I said I am not assuming anything.  I will look at some of the graphics for December sometime later this week.

The sun has now broken out. I recorded a total of 0.03″ of rain fall. I call it rain fall as I did not see any snow mixed in here. At this time with the sun shinning from the SW it 39 here.
Slim

The Lions are the most pathetic and worst pro football franchise in the history of the World! Embarrassing!

It has been lightly snowing here all day. Very fine flakes. Grass is still green, though. 34 degrees at this time.

The long range snow maps are starting to trend in the right direction! Bring it!

There is a lot of variability to year to year snowfall totals. For the snow belt areas of the Great Lakes it depends on how cold it becomes what the wind directions are and how windy it is. And if we get some big system snows to with that. In areas that do not receive as much lake effect (or any) it all depends on how systems shape up. For no lake effect areas one or two big storms will make the difference. A good example is happing right now. With todays system it looks like areas around Detroit will… Read more »

Thanks MV! Always fun to compare one year with another as they can be drastically different.
On a non weather note, one of my employees came down with COVID about 2 weeks ago so I decided to get tested to be safe. Finally got the results last night and it was positive. Oddly I have had zero symptoms other than a little runny nose for 2 days, but that is gone already. My employee was down hard for 2 weeks. Very odd virus. Stay safe everyone!

One of the unsure things with COVID is that some people get really sick and others not so much. I know there is some talk of blood type but I am not sure how reliable that is. As for a runny nose I have allergies and with that a runny noise most of the year. Anyway Barry glad to hear you did not get real sick. I have couple of friends who have gotten COVID and they have gotten really sick with it. But one her husband did not get that sick at all.
Slim

Not odd at all -all of the documentation shows most of the covid 19 spread is from asymptomatic carriers and it also shows some people get very sick and die. So your situation is perfectly normal and why all citizens need to wear a mask and social distance anytime they are out in public!

That’s exactly what we do, anytime we go out. My wife and I will be doing Thanksgiving at home this year. Just the two of us. My uncle agreed that it was too risky for our entire family to get together. We may go over to my grandma’s later in the day and sit outside and have dessert with her, if the weather cooperates.

Glad to hear that you are following all the scientific data and protocols! No one should be going anywhere for Thanksgiving or having anyone over to their house this Thanksgiving! The data and facts are clear! If I see ignorant people in the store not wearing a mask or not wearing a mask properly, I stay at least 10 feet away from them! These are the people that are exasperating the spread and are extremely rude!

I’m glad to hear you’re okay, Barry. A friend of mine about our age was in ICU with a ventilator. It was touch and go for a while. He has improved and moved to a regular room several days ago. Another friend of ours lost her dad last week. Scary times, indeed.

Glad to hear you did not get real sick with Covid. My husband had it and would never had known it either. no symptoms. My test was negative. They are finding some people are walking around with it and don’t even know it.