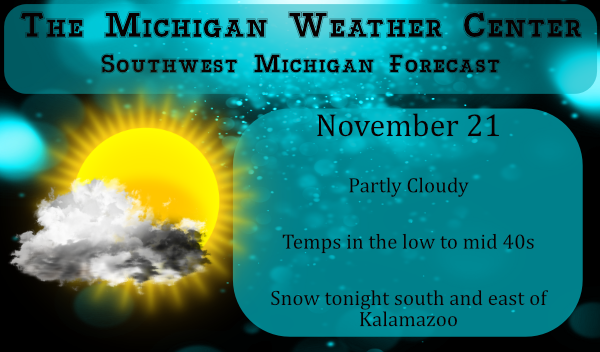 It was 70 years ago and it was a wild month of November.

While earlier then month we had a record setting warm spell. Note some would say “heat wave” but 70 years ago on November 25th was the date of the so called big ten football “Snow Bowl”

The Michigan/Ohio State football game on November 25, 1950 is known as the Snow Bowl, for obvious reasons.   As explained in the alumni magazine, Ohio State University Monthly “The game was played in the teeth of a full-scale blizzard, five inches of snow on the ground and snow whistling through the air, borne on a 29-mile-per-hour gale.  Despite the fact it was the worst blizzard in 37 years in Columbus, the Ohio capital easily defended its title as the football craziest town in the nation.  A total of 50,503 persons braved the elements, staying below deck, under the Stadium, until just a few minutes before the kickoff.”

Because of the large crowd, and the mess it would have created to refund the tickets, Ohio State Athletic Director Dick Larkins, after conferring with both Michigan and Big Ten officials, decided to play the game.  The game had bearing on who would win the conference and go to the Rose Bowl.

Volunteers were detailed to special broom duty, keeping the goal lines and the sideline yard-markers swept clean throughout the game.  On several occasions, when there was an official’s time-out to measure for a first down, a special crew of sweepers cleared off the snow to find the line. The strategy of both teams became the same, run a play or two into the line – straight in – and then kick, preferably on third down because if a fumble occurred a fourth down for kicking would be available.

The snow, wind, and insecure footing made the game a mockery – an imitation of football only by a stretch of the imagination.  The two teams huffed, puffed, bumped and slid.  Cold hands refused to hang on to the ball.  At the end of 60 minutes of sliding and kicking, Michigan emerged on the long end of a 9-3 count.

The overnight low here at my house was 29 the official overnight low at GRR was 31. At this time it is mostly clear and 31 here with a lot of frost. We will have to see how much snow fall GRR records in the next 9 days. At this time only 0.2″ has fallen at Grand Rapids and that was on November 1st. And that is the total for the season so far. While there is snow in the forecast and thus more snow should fall before the end of the month but at this time there are only… Read more »

Tomorrow I will post snow cover for the U.S. this year compared to previous years for November.

I just checked out some of the footage on YouTube. That is unreal. No sideline heaters or hand warmers back then. You know there was some cold weather injuries. Great post, Slim.

HA! games like this would give the full-backs a good workout. Snow bowls level the playing field, fun games to watch… thanks Slim…