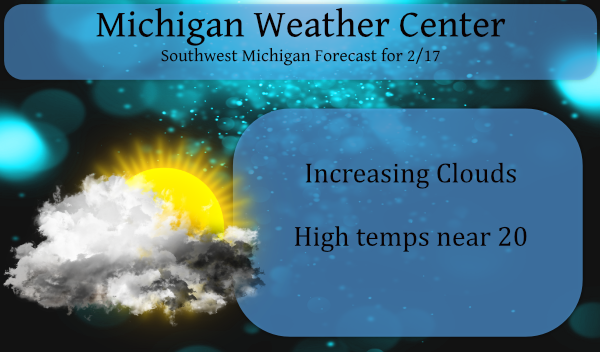 Wow!  It is colder than cold outside this morning with temps in the negative digits.  We dropped to zero at 9:15 last night and temps have been falling since.  We are currently at -11.6° at 6:45 am in Otsego, -13.7° in Plainwell,  -15.5° in Kalamazoo, and -11° just north of Grand Rapids.  We haven’t seen temps like these in several years and luckily this should be the coldest of the season.

1899: The record arctic cold wave begins to abate but not before Grand Rapids sets their all-time record low of 24 below zero.

1954: A two-day surge of warm air into Lower Michigan peaks with record highs of 61 degrees at Grand Rapids and 60 at Lansing.

1981: Lower Michigan is in the midst of a long period of thawing weather with lows above freezing and highs mostly in the 50s from the 16th to the 20th.

1973: Arctic air is in force across Lower Michigan with record lows of 19 below at Grand Rapids. Muskegon falls to 14 below zero, just shy of the record low for the day of 15 below set in 1904.

1979: A long spell of frigid weather during January and February results in Lake Michigan freezing over almost completely for the only time on record.

1926: A snowstorm drops 5 to 9 inches of snow across southern Lower Michigan. Lansing sets a record snow total for the day of 8.5 inches.

2014: Persistent cold weather and frequent snows during January and February result in a deep snow cover that persists through much of March. At Grand Rapids, the snow depth reaches 24 inches on this date, second only to the record of 25 inches set after the blizzard of late January 1978.

2016: Winds gusts to 70 mph in Grand Rapids and 66 mph in Jackson as a strong low-pressure center moved across the Great Lakes. Lower Michigan was on the warm side of the storm with record highs around 60 degrees.

1898: A snowstorm dumps over a foot of snow on parts of Lower Michigan from the 20th to the 21st. Grand Rapids has 11 inches from this storm and almost 30 inches for the month of February.

1951: Ice jam flooding along the Grand River in Portland damages several buildings and forces the evacuation of some neighborhoods near the river.

This map looks way better!! Plenty of MELTING going on!!

No this map looks much better! I will be skiing well into March and maybe April this year! Who would have thought?

The warm up next week will be brief and then back to normal to below normal temps and more SNOW! Bring it!

It was another spectacular day out on the trails! I love winter! Let’s hope for a cold and snowy March with record snowfall!

Funny but all of these warm weather nuts need to take up a winter sport and enjoy the cold and snow!

Forget winter!!! Let’s get the melting going and get that early SPRING started!!!

Once the system that brings light snow early next week exits the area the polar jet gets north of this area by Wednesday morning. That will bring our afternoon temperatures above freezing and start to melt all that snow on the ground. The next system following that would be toward Friday so we could have 3 to 4 days of dry weather with considerable sunshine to boot.

Get ready, the Sunday/Monday storm may bring SW Lower MI 3 to 6 inches of fresh snow! Stay tuned for later updates and let it snow!!!

Wow, Marshall reached -21 and Charlotte had -20 this morning.

We are currently over 200% above the normal February snowfall to date! Incredible snow totals and cold this month!

The current temperature here at my house is -9 looks like the official low at GRR so far has been -12 that will be the coldest low since February 20 2015. But still not as cold as the record for this date of -19 set in 1973. As I stated at this time it is clear here with a temperature of -9 and there is 13.5″ of snow on the ground.
slim

First time below zero in two years for GR, correct?

-12 here with some eerie-looking low hanging fog before sunrise.

The great winter whether just keeps rocking! It will be a great day to go skiing, snowshoeing, ice skating, snowmobiling, ice fishing, etc, etc! Get outside people!