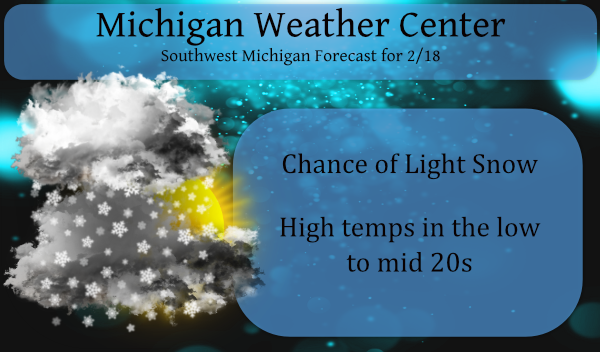 We are 20° warmer than this time yesterday morning, we currently have 13° in Otsego.  We are now up to 35 inches of snow for the season and just five inches short of last year’s total snowfall.  The big story this season is the bitter cold which we have seen the likes of in five years.

We have chances of light snow through the rest of the week which should be meager at best but will freshen up the 15 or so inches on the ground.  With the warmup in store for next week, the snow will compress and start to melt off.  This ‘may’ be the last of the deep Arctic air we see this winter.

We go through this every year around this time! The warm weather fanatics start begging for warm temps and say the warm temps will be here soon and then a week or so later we get plenty of cold and snow! Same thing holds true this year! Get ready for tons of snow! I love it! What a winter with great conditions!

We go thru this every winter too, Rocky saying tons of snow and cold to arrive in November and stick around til June! But much like this year, Winter doesn’t even show up til February and quickly leaves in March and we’re still a foot and a half below normal season snowfall!! Get ready for a front loaded Spring!!

Looks like the warmth is going to stick around for a while!! Who would have thought?!??! Front loaded SPRING coming up!

There you go again posting the cpc maps! When will you learn? I would say never, based on your past actions!

As soon as you stop posting the instantweathermaps!

Record snowfall and record cold February’s numbers are truly amazing!! Back loaded Winter 2021 fun who would of thought…INDY

Too bad the warm weather fanatics can’t face the facts!

What? It is snowing and more accumulating snow tomorrow and then more on Sunday night and then after a brief warm up, plenty of snow chances well into March! I love back loaded winters! Rock n Roll will never die! I love winter!

Despite the warm weather propaganda, the snow maps look great especially for snow country! Trust me the warm up will be short lived and then let the rock n roll party get cranked up! Possible polar vortex baby!

Thanks Slim! Those are some large departures from average in some locations, especially Marquette being over 50” below.

Charlotte was 30 degrees warmer this morning than 24 hours ago. That was some serious arctic air.

Great news, the warm up next week will be short lived! By the end of next week high around freezing with more snow chances! Bring it!

The warming trend will persist through the first half of next week with highs breaking above freezing by Monday. Conditions will stay mostly dry with highs in the mid to upper 30s through midweek allowing for a fair amount of snowmelt.

WOOD says the warmup could last at least into March. And at that time, average high temps are approaching 40 degrees. I love it! Spring here we come!

There are some hints of another Arctic outbreak coming in early March though not as severe as the current one we are experiencing.

This is from Accuweather today’s long range guess. POTENTIAL BLAST OF COLD LATE 11- TO 15-DAY PERIOD MIDWEST TO EAST: There is a plenty of support right now for a charge of cold air to reach the Great Lakes, Ohio Valley and Northeast this time. We will discuss in more details the support in the technical discussion later. Temperature departures can be 8-16 degrees below normal with a slight chance for 25 below normal readings, especially across Canada. Natural gas and heating oil have risen over the past few days due to weather and other factors. Prices may remain higher… Read more »

darn, I want some fresh tomatoes!!!

March is a pretty dynamic month, with lots of warm ups and cool downs. So certainly wouldn’t be surprised to see a short arctic outbreak at some point in the month (probably early in the month based on models… if they are accurate)

Took the dog out for morning business at 6:30 yesterday morning, and, at -13*, I thought I was back in Minnesota! I’m going to miss the sound of that crunchy snow under my feet…