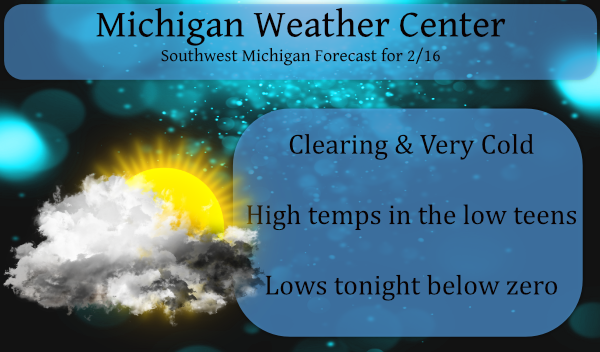 I took a few preliminary snow measurements this morning on my deck and it appears we can add another 4.5 inches to our totals for the season which brings us to 34.5 inches.  Temp is a balmy 7.7° at 6:30 am.

There is still some light snow around the area which should be moving out this morning then the coldest air of the season thus far will move into place.  Temps tonight could dip into negative territory a cold we haven’t seen in a couple of years or so (Slim can verify this I am sure).   All of our advisories and warnings will expire at noon.

Our furnace is good to go once again – had to install a new ignitor.  Luckily we have alternative sources to keep us warm.  We have an Amish fireplace which we used yesterday.  I also have a kerosene and propane heater which we didn’t have to use (they put out odors).

Great news! We have multiple snow chances, this week, weekend and next week! I love it!

Sure seems like almost a half foot of snow fell here last night. The snow cover is incredibly deep, and more snow is on the way Thursday and Friday.
I imagine we are approaching peak season snow cover, as the warm up next week should start to eat away at the snow.

They kept us in a Winter Weather Advisory and i believe we got at least 7 if not 8″. I am just south of Lansing and they were in warning but across the county line.. kept us in advisory. Too funny 🙂

What a gorgeous winter day! Dress for the weather and get outside and enjoy the winter wonderland! Incredible!

Bring on the next snow storm! We are having some great winter weather right now! Keep it up!

Just finished clearing the snow. I took ten or so measurements throughout the entire driveway. 8-11″, no joke. Easily the biggest dump of snow in a long time here.

As per the NWS GR, the official snowfall reports in my immediate area say 8-9″.

We did too. I would think we have about the same 7-8 inches. We cleared driveway yesterday, to prep for this snow.

Picked up 4.2″ of snow overnight and there is now between 14 and 15″ of snow on the ground. At this time it is partly cloudy and 9 here.
Slim

GR is now up to over 40 inches of seasonal snowfall and a lot more to come! Who knows we may end up at or above normal before this winter comes to an end! Incredible!

Not to shabby for having snow on the ground since Christmas day with no thaws no rain and no 50’s this winter season …. DDDDDD..INDY

It has been great for winter sports! Weeks on end of excellent conditions! Who knew?

Cant make this up over 2 feet of snow for February in my area and below normal in temps amazing numbers coming in …wow just wow great Scotty who would of thought?? INDY …

Great News>>>> We have more cold and snow on the way this week! Spoiler alert – watch out for the Sunday storm! Lets keep this rock n roll party cooking!

It looks like another Bingo for the RDB model! Looks like GR has seen 5 to 6 inches of fresh snow! The RDB model is near 100% accuracy this winter! Incredible!

Happy to hear you have heat again, MV. That is no fun. I have no idea how much snow we received, but it was significant Our back deck has a bare spot at one end and a drift at the other end that is as high as the railing (waist-high). Looking out front at the mail box, trees, and bushes. I can confidently say that this is the deepest the snow has been in the four winters we have lived here. At this point, it looks like the Thursday night storm will pass to the south and east, but things… Read more »