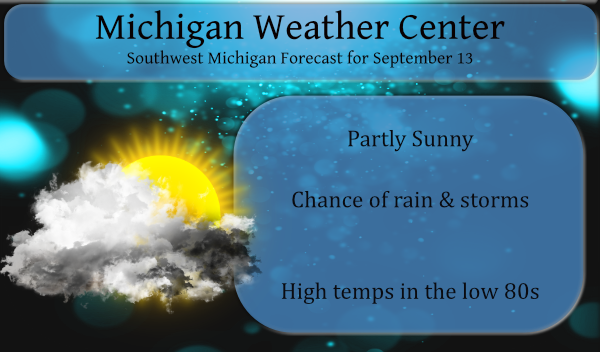 We had a few raindrops fall here in Otsego yesterday morning, not enough to assume even a trace while from Grand Rapids to the north taunted us with their rain and storms.  The thunderstorm watch for Allegan and Barry counties were not productive and lay our hopes for rain dashed by the wayside.  We will see similar circumstances today.

Additional rounds of thunderstorms will affect portions of Lower Michigan through Tuesday. Most of these storms will NOT be severe. However, there is a small risk of severe thunderstorms today/tomorrow for communities within the dark-green shading. A somewhat greater risk of severe storms exists on Tuesday for communities within the yellow shading. Here are some key messages: (1) For today and tonight, the timing of storms is uncertain. We expect that several rounds of storms will affect parts of Lower Michigan at different times, but details are unclear at present. (2) For Tuesday, the main risk of severe thunderstorms (yellow shading) appears to be focused in the afternoon/evening. (3) On both days, the main risks will be for local wind damage to trees and power lines, along with large hail and locally heavy rain. Note, however, that most locations will NOT experience severe weather.

Below are the SPC graphics for today and tomorrow.

I am glad everyone was ready for the rain storm! There will be more coming over the next 36 hours! Get prepared now!

That was a nice storm. High winds, lots of rain. I’m willing to be that we’ve had more severe thunderstorm warnings this summer than the last three summers combined.

Hey we finally got some rain! 1.18” by us. Grass already looks greener. Now we can keep mowing till December.

It poured here too. Also got some hail. I can see the grass growing already.

It is dark as night here.

Darkness is moving in quickly from the west.

its pouring over here

It is great to see some above normal temps as we head into Fall! That will keep the lakes warmer than normal and then when winter hits we will get pounded with lake effect SNOW! Winter will be here before you know and the rock n roll party will get into full gear! Who wouldn’t love winter in MI? Incredible!

Well that’s the exact same thing you’ve said the past couple of years, yet the past couple years it hasn’t really snowed until late January or early February. In fact, Slim might have to verify this, but I believe last year was something like the latest we’ve ever had snow, or maybe it was the least amount of snow ever by mid January.

This year we will have a weak La Niña which equals massive cold and snow! Facts are facts so get ready to rock!

And that is pretty much exactly the same pattern that we had last year. Just think, if we repeat the past several years pattern, there won’t be snow on the ground for another 4 months yet!

Not a drop of rain here yesterday.

Well its been over 3 weeks on cutting my grass today maybe the day the slowing down grass growing season is here woo woo lots of dead leafs fallen to haft to get the rakes out love Fall dose it get any better then this ?? INDY

In a very heavy shower yesterday I recorded 0.34″ of rain. But at the airport they only had 0.06″ of rain fall. This morning just the opposite. GRR reported 0.08″ and here at my house just 0.01″ The overnight low was 61 both here and at GRR. At this time it is cloudy with a light mist and 62 here.
Slim