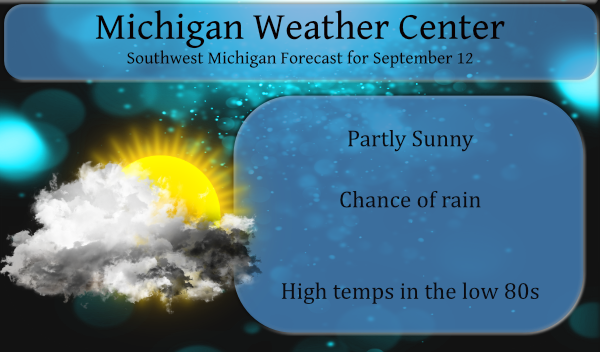 Still a bit early to make any winter forecast but I thought I would throw this out there.  The GFS anomaly forecast showing continued warmth across a good portion of the U.S. and an early cool down in Siberia and eastern Eurasia.

The SPC has central Michigan in a marginal risk for severe storms today.

Yesterday we reached 81° with a low of 53°.  At 5:30 this morning we have a warm 68°.  Our last decent rainfall was on August 26th, we have gone 16 days with meager precipitation measured in the hundredths.

We got pounded with rain!

I didn’t get a drop of rain today. Nothing.

Same here. Watches and warnings all around but not a drop.

I watched several YouTube winter forecasts this A.M. and the consensus seems to be a La Nina winter with lots of cold and snow for the Great Lakes.

Yesterday Barry asked as to how this year compares to past years in the number of days at or above 80. We still have almost two more months when it could reach 80 but here is where we stand as of September 11, 2021. For days with highs of 90 or above in the last 120 years GR averaged 12 per year this year we have had 7. For days of highs of 88 or above GR averages 20 this year so far we have had 18 for days of 85 or better the 120 average is 36 so far… Read more »

Thanks Slim. With the way the outlooks are trending we are going to end up adding a bunch more days to those totals. I usually love September because of the lower dew points and drier air, but once again the dew point is approaching 70 today.

The last rainfall here was now about a month ago with the big storms that knocked out power everywhere. A few drips here and there, but barely enough to even get the ground wet. If those maps above are anywhere near accurate looks like the AC will be staying on for a while. Just hope we don’t get a repeat of September 2017.

I have posted the temperature information you asked about above. As for rain fall officially at Grand Rapids since August 12th there has only been 0.48″ of rain fall at Holland there has been 0.60″ of rain fall.
Slim