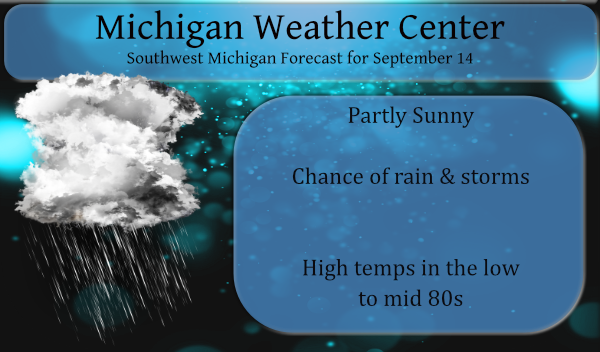 Yesterday we had a brief period of sunshine which lasted maybe half an hour.  Even with all the clouds we still had no rain in Otsego. It has been 18 days since we had more than a tenth of an inch of rain.

Today will be the best chance for widespread rain across the southern lower peninsula then we begin another long dry spell with temps rising well into the 80s.

Severe storms will be possible late this afternoon through the early evening. These may not affect all of West Michigan though, as they will likely develop east of US 131 and move southeast. The risk to see severe storms is higher south and east of a line from St. Joseph to Ionia to Saginaw. The main risk from severe storms will be wind damage to trees and power lines, but we may also see large hail. An isolated tornado is not out of the question. The heavy downpours during rush hour could increase the chance for hydroplaning and localized flooding.

Convective Outlook from the SPC

Temp is down to 76* degrees out in my hood cold front is through dry …Feels great outside…INDY..

All action to the East. Once again…not our weather.

Right now it is sunny and has a little breeze, very nice day out😀

Boy, what happened to the talk of cool “Fall” weather and September frost? Dew points are once again up around 70 and temps approaching 90 again next week. The Summer that won’t quit.

The trend of warmer Autumns seems to be continuing. Last time we had a cool fall was back in 2015 (I think, I might be off by a year) when we had a frigid November.

We are in the level 1 risk, so I doubt we will get anything, but I could be wrong.🤔

Wow, look at that 8-day forecast. Are we in July or mid September?

That is very interesting.

Nice! It’s been common for every month to be warm the past 10 years it seems. I believe summer marked our 4th or 5th straight warm season in a row. And we are going for 4 or 5 warm years in a row in 2021.

i agree, it needs to be colder not warmer