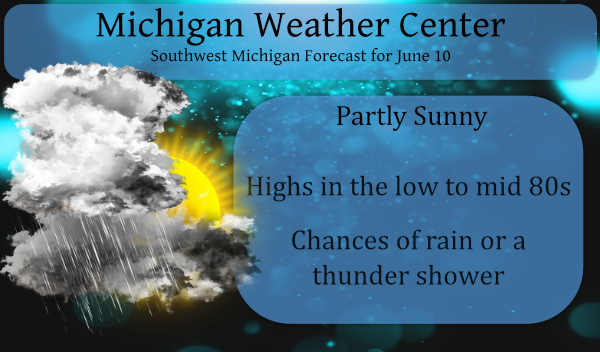 Our rainfall total for yesterday was .16 of an inch which brings us to a whopping .21 for the month of June.  We reached 90° yesterday.  Of course, we had a wide variety of rainfall totals across the area, the thing which was consistent was the humidity creating a very sultry day across the state.

Some areas have had a month’s worth of rain this week others have been teased with just or few sprinkles or watching the pretty colors on the radar as the rain moved around them.  We had heavy rain just north of Otsego to the Watson area and a few rumbles of thunder before a second cell formed and moved through our area.

Models suggest a scenario much like yesterday setting up over the lakeshore counties with lesser coverage elsewhere.

Approaching 90 on the heat index once again today. What a start to summer!

Got another .25 yesterday. Total since Monday 1.77. Pasture is coming back. Started feeding hay last week.

Heat indexes in the mid 80’s before noon. Wow another HOT one!

We had some rain and thunder yesterday. We have a rain gauge from a science kit… it measures in mL. We had about 3-4 mL… Not a lot but our garden will take what it can.

I just got back from my walk. While not all that bad out it is warm and humid the current temperature here is 81 and my DP is 73.
Slim

I had a nice 0.64 of rain yesterday. Ready for more today if mother nature is feeling generous!

Yesterday I put up a rain gauge by my business in town. Good timing for the hit and miss rain. Rain at my house which is 4 miles East of town the total was 0.89”, and the rain in town total was a meager 0.03”. Quite a bit of thunder as well.

Phew! Hit 89 again yesterday. Today will be our 8th warm day in a row.

Here at my house another 0.09″ of rain fell in a brief but heavy downpour. Here everything is now nice and green my grass will need cutting again soon and the tomato plants are growing the best in years. The overnight low here was a warm 67 and at the time it is clear and 68. The DP is down to 64 this morning and in fact it feels nice out side and while my AC is on it is not running at this time.
Slim

Well I don’t know about the rest of you, but my backyard sucked up almost 1.5 inches of rain yesterday, with about 1.2 of that coming down over a period of about 30 minutes! Too much, too fast, but I guess we will take what we can get 🙂