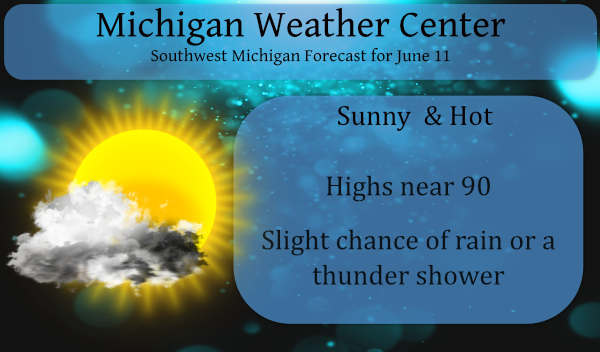 The topical storm outlook from the National Hurricane Center remains fairly quiet once again.  The Atlantic Ocean has no tropical storm formation forecast over the next five days.  The Eastern Pacific has two disturbances well off the coast of Mexico which have a 20 to 30% chance of forming tropical storms and the Central Pacific also remains quiet. There are no tropical storm warnings in the northwest Pacific and the Indian Ocean.

It has also been fairly quiet in Michigan with the lack of storms.  We haven’t had much more than a few rumbles of thunder in the state.  Most of Lower Michigan is in at least a moderate drought. West-central Lower Michigan is experiencing a severe drought. Such dry conditions are leading to elevated wildfire potential requiring vigilant fire prevention. 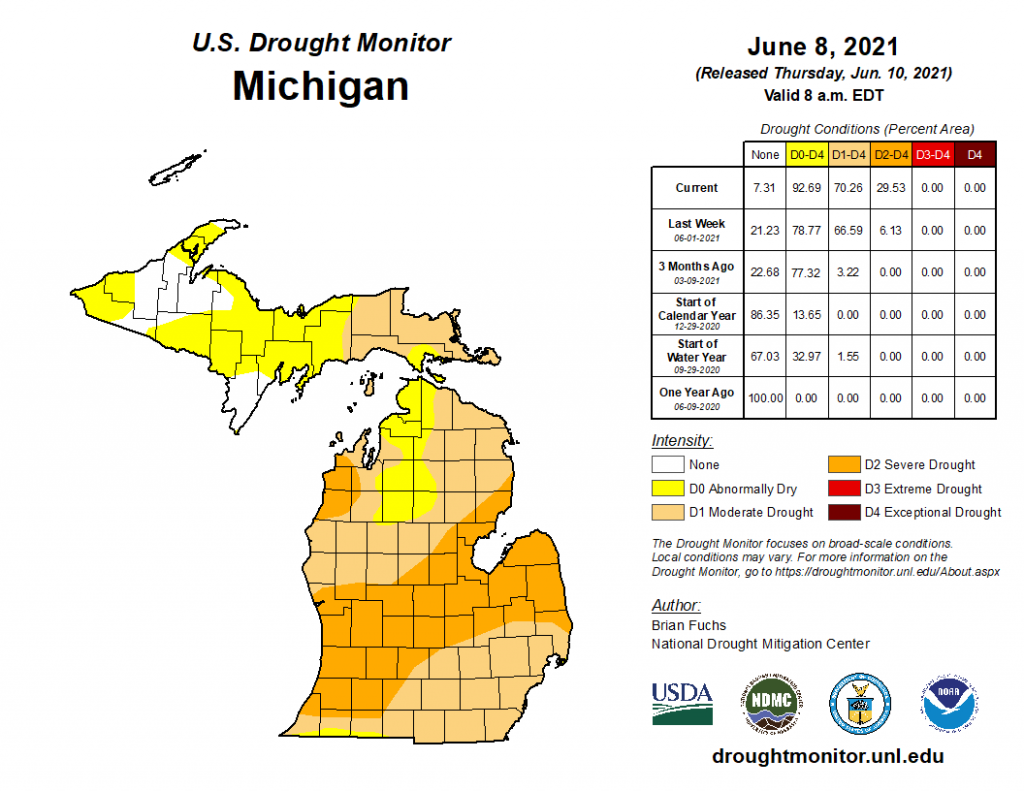 The rainfall over the last few days was not a drought buster but should keep conditions from getting worse for at least a week or two. Scattered showers and isolated thunderstorms are possible this afternoon and evening with another round of showers possible on Saturday.  We need to pick up several inches of rain to break the drought however according to long-range forecasts, conditions around the state will remain drier than normal over much of the rest of the month.

Today rain chances remain around 20% for the lakeshore counties and 30% west of 131.  It will remain hot and humid with heat indices near 95 with a light breeze.  Tomorrow rain chances increase to 40%.  After that system moves out we will enter another dry period for next week.

Feels great outside the heat and humidity has broke nice night for a fire now ….Did GR officially hit 90* degrees today asking of a friend???
Phew Lol!! …INDY

That huge system broke in 1/2 right over me.. Not one drop on my home but poured in
Charlotte and Holt .. Up in Lansing and down in Jackson. Soooo frustrated… trying to not take this personally.. LOL 🙂

That was a “near miss”. The edge of the storms to our East just blew through Cascade Twp, dry, but dark and gusty.

The outflow came through and the temp dropped 20 degrees.

Does no one have sprinklers for their lawn in this group? My lawn looks so lush and green with all this sunshine and heat. Flowers and bushes look to be at least a few weeks ahead of schedule this year too.

This HEAT just won’t quit. We should be more than +7 degrees above average for June after today.

We’re at +8.7 here for the month through yesterday.

The warmest June at Lansing was in 2005 with a June mean of 72.7 and this year with a current mean 74.1 of is running warmer than that year. For some reason the warmest June’s at Grand Rapids (1919, 1933. 1921 ect) are several degrees cooler at Lansing. I do not know if they reporting location at Lansing has changed but I do know that back in the 1960’s and 70’s Lansing had night time lows that got much cooler than some other areas.
Slim

Capital City Airport is much smaller than GR Ford, and it’s NW of town. Maybe less concrete and more rural has something to do with that?

I don’t trust temp comparisons from the 1930’s, especially with the dust bowl influencing things.

It looks like we may have another 90-degree day today. At least we will get a bit of a reprieve over the next week with temps back into the 80s and maybe a day or two in the high 70s.

So far officially Lansing has only recorded 0.13″ of rain this month that is after just 1.20″ in May. I would say that Lansing is overdue for some rain.
Slim

My lawn and nearby fields would agree. It’s a dust bowl.

No rain to report from my house. The overnight low here was 69 and it looks like the official low at the airport should be 68. At this time it is a warm 73 here with a DP of 68. I know there are some people who do not like this humid weather but working outside at night it is not been bad at all in the shade. Of course if one is in the sun that is a different story. But it looks like there will be a “cool” down next week for a while at that will give… Read more »

Hot and humid is right! Hit 91 yesterday afternoon with a heat index of 95. We also added 3 one hundredths of an inch of rain keeping the drought rolling. Whoever was posting back at the beginning of the week about no hot air in sight this week was just a few miles off.