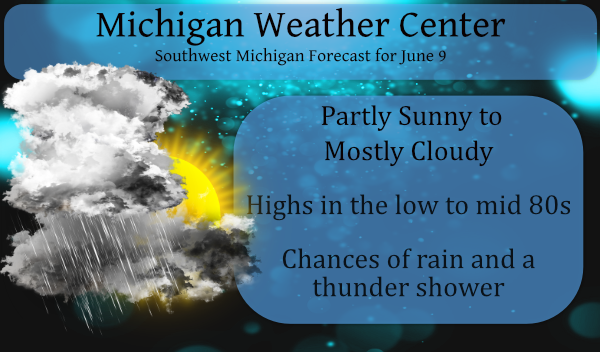 Once again the rain missed the Otsego/Plainwell area yesterday.  Our high temp was 84°.

We will have much of the same scenario today with hit-or-miss showers and a few rumbles of thunder.  It is nearly impossible to predict when or where the rain may fall so consider yourself lucky if you get some.  What may help us along in the rain department today would be a convergence boundary setting up around the I96 corridor and a lake breeze which would give us a chance of more widespread precipitation.

1869: It was the second frosty morning in a row as temperatures dropped to near or below freezing. Lansing recorded a low of 31 degrees, after a low of 27 degrees on the 5th which is the coldest ever recorded there in the month of June.

1917: A violent tornado struck the town of Springport in Jackson County, killing two people. About 35 homes were destroyed.

1958: One of the coolest Junes on record saw scattered frost across the region as the temperature fell to the mid-30s.

1933: An early-season heat wave peaked as temperatures hit 97 degrees at Grand Rapids and 92 at Lansing.

2008: Severe weather and flash flooding occur on June 7th and 8th, with four drownings in southwest Lower Michigan. Two people drowned when their car plunged into a fifty-foot ravine created by a washed-out road in Castle Park, Allegan County. Tornadoes struck in Osceola County near Hersey and in Eaton County near Needmore, downing hundreds of trees and destroying several outbuildings.

2003: Tornadoes strike Lower Michigan, with damage mostly confined to near Fenton in Genesee County and Leonard in Oakland County. A weak tornado hit near Rose Lake in Osceola County but did no damage.

1963: Severe thunderstorms caused millions of dollars in damage across the region as winds gusted over 70 mph. There were also reports of funnel clouds and a possible tornado in Belmont where several trailers were destroyed and homes were damaged. A tornado near Dorr heavily damaged a house.

1966: A large storm system that had produced the F5 Topeka, Kansas tornado the previous day moved into the Great Lakes region and brought severe weather to Lower Michigan with high winds and large hail. A tornado struck Wall Lake, near Delton in Barry County and damaged a boat and cottage.

1974: Ferris State University in Big Rapids is hit by a tornado. Two people are injured. Several houses and two schools also had damage to roofs and walls.

2004: Severe thunderstorms produced at least one tornado and some very large hail. Hailstones over 4 inches in diameter fell in Jackson County and a tornado briefly touched down near Alma, producing only some tree damage.

1939: Tornadoes struck across southern Lower Michigan, including one that hit Kalamazoo County from near Schoolcraft to Austin Lake. A farmhouse lost its second floor and a mattress from the home was found over a mile away.

1968: Severe thunderstorms produced large hail across the region. Hail of 2.5 inches in diameter fell in Ionia County. One of the storms spawns a tornado that kills one person near Pompeii in Gratiot County.

1972: A late-season freeze struck the region with Muskegon dropping to 31 degrees for their coldest June temperature on record. Lansing fell to 32 degrees and Grand Rapids to 33 degrees.

1996: Extensive flash flooding in and around Mt. Pleasant was the result of 1.82 inches of rainfall in 30 minutes with storm totals exceeding 2 inches. At one point parking lots had water 12 inches deep, several fields and ditches were flooded, and some motor homes and campers were set afloat.

1998: A tornado touched down in Bedford Township in northwest Calhoun County, doing minor damage to a few homes and shearing off trees like a large weed whacker.

2008: Historic flash flooding results from up to a foot of rain near Ludington and Manistee. More than 40 roads were washed out and some of them were not repaired for several months. The torrential rains are preceded by a severe thunderstorm that drops two tornadoes. The first tornado came ashore north of Ludington at the Nordhouse Dunes Wilderness Area, downing hundreds of trees. A second tornado hit near Stronach in Manistee County.

On June 6, 2008, widespread severe weather was reported across the Tri-Cities, Thumb and Flint areas. There were 24 reports of hail and wind damage from the storms with a measured 71 mph wind gust from a spotter in Howell.

Also on June 6, 2010, a strong low-pressure system tracked through the Detroit Metro area during the early morning hours, spawning three tornadoes south of I-94, with flash flooding occurring over Washtenaw and Wayne counties as 2 to 4 inches of rain was recorded. The two tornadoes which occurred over Monroe county damaged a total of 311 buildings. Five single-family homes were destroyed. Major damage occurred at 34 structures. Minor damage was observed at 74 structures, with 198 other homes affected needing mostly cosmetic repairs. The village of Dundee was hardest hit by the EF2 tornado.

On June 8, 1953, the deadliest tornado in Michigan history struck the northern Flint community of Beecher at 8:30 PM, killing 116 and injuring 844 along its path. The F5 tornado touched down about 2 miles north of Flushing and from there, created a path averaging about a half-mile wide as it moved across Flint, at an approximate speed of 35mph, to about 2 miles north of Lapeer. A 23-mile long path of death and destruction was left in its wake with over a hundred lives lost, including as many as 20 families reporting multiple deaths. Damage was estimated at $19 million (1953 dollars). On this day in 2003 (the 50th anniversary of the Beecher/Flint Tornado), three tornadoes touched down in the area. Ironically, one tornado hit the southern portion of Genesee County while commemoration ceremonies were underway.

Also on June 8, 2008, a derecho, a significant squall line, raced through Southeast Lower Michigan. Winds were estimated to 80 to 90 mph across portions of Tuscola, Oakland and Macomb Counties. In Southeast Michigan, nearly 300,000 homes and businesses lost power in the storm and total damage was nearly $100 million.

On June 9, 2011, a cold front moved through Southeast Michigan around midnight and it produced numerous severe thunderstorms across southeast Michigan during the early morning hours. Winds were estimated to be near 85 mph around Sebewaing with dozens of downed trees and extensive damage at the airport. A measured wind gust of 76 mph was recorded in Flint.

Also on June 9, 1933, the overnight low temperature dropped to only 76 degrees in Detroit. Considering that the normal high temperature for June 9 is 78 degrees, this would have been a very warm overnight temperature!

On June 10, 1941, the overnight low dropped to a “freezing” 33 degrees in the city of Saginaw. This is the record low temperature for the month of June in Saginaw and is tied by the low temperature recorded on June 8, 1949.

On June 11, 2014, a supercell spawned a tornado just southwest of the town of Saint Charles. The tornado intensified to EF-1 along Fordney Road between Brant and Fergus Roads. Several large trees were uprooted and minor structural damage was observed.

On June 12, 1984, an F3 tornado hit Bay County at 6:20 PM and caused $2,500,000 in damage. Two individuals were reported injured, but there were no deaths. This was the strongest tornado ever reported in Bay County.

That looks very odd with a line of rain moving from the Southeast to the Northwest on radar. Backwards.

How can they “look” so close? 😉 Surrounded by towering storms, with sun on the driveway…everything is staying away from Ada as usual.

Same here. Dark clouds all around and I can hear thunder. We’re missing out again. 😒

91* degrees In my area probably the hottest day in June I’m thinking!! it down right sucks outside at least the fan feels good and the poool is Coool…INDY!!!

My bro lives in Phoenix. It’s 99 there currently, but the dew point is only 27.

88 degrees with a heat index of 93 degrees. Phew, it’s HOT! Definitely a lot warmer than forecasts had this morning.

Temp may not be “officially” 90 yet but the heat index now is. Ugh, this feels terrible.

Hey ya’ll – in case you were not aware, Blake Harms is now doing the weather during the morning news on WLNS channel 6 here in Lansing. He is doing a great job! It seems like just yesterday when he was in high school, predicting school closings on Bill’s Blog.

He is a smart kid – doesn’t seem that long ago he was in High School – I believe he will make a name for himself in the world of weather.

Agreed. He is relaxed and yet confident on television. He’s a natural.

For those that get up early and if it is clear and you have a good view to the NE there will be a eclipse of the sun on Thursday at sun rise. The best locations in Michigan will be on the far east side of the state along the Lake Huron shore as it will be at sunrise and I think that in the Alpena area the maximum coverage is around 62% of so.
https://www.wxyz.com/news/michigan-gets-a-rare-view-of-solar-eclipse-next-week
Slim

We had almost 2 whole minutes of rain yesterday and a few rumbles of thunder, but not enough rain to measure in the gauge. Boy this is some hot & steamy air we’ve been in. Dew point yesterday was into the 70’s again which feels just downright awful unless your in the ac all day.

Phew! We’ve already had 4 days at 87 degrees or better in June.