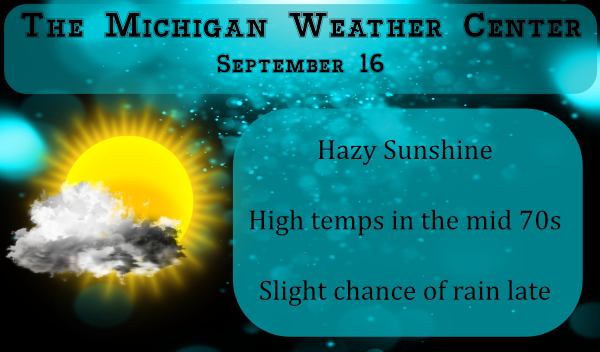 The story for the end of the week is the cooling trend coming from a cold front this evening which will push our temps to below seasonal norms.  Normal high temps are in the upper 60s.  This will only be temporary as temps are predicted to go above normal next week then below normal as we get into the first week of October.  Enjoy the roller coaster ride!

We have expectations of drier than normal conditions through the end of the month.  Chances of rain today are less than 20%.  Our next chance of rain may be later next week. 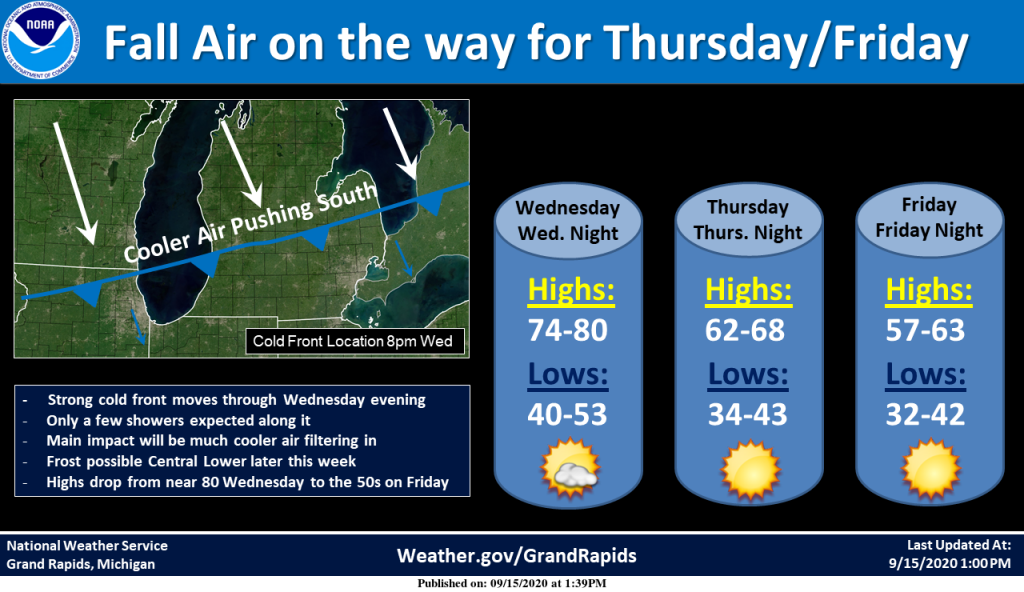 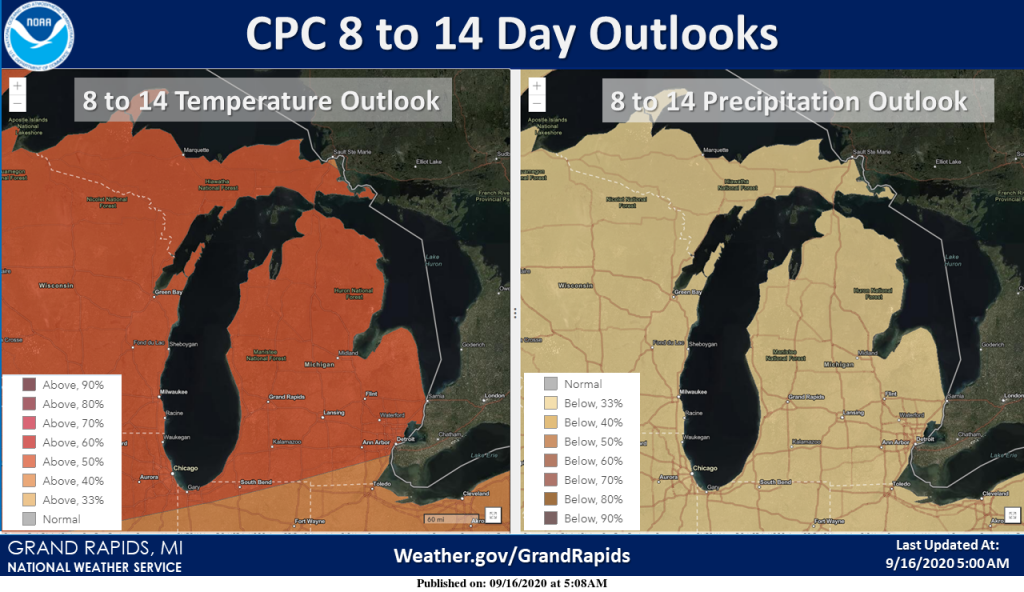 1952: Muskegon reaches 92 degrees for their third record high temperature in a row.

1962: A severe thunderstorm struck Lansing with wind gusts over 65 mph, producing light damage across the city.

2008: Five tornadoes strike southern Lower Michigan. Four of the tornadoes were spawned by one thunderstorm. A car dealership and a restaurant were damaged in Paw Paw and weak tornadoes damaged trees near Mattawan in Allegan County, Millers Corner in Kalamazoo County, and Brookfield in Eaton County. Several buildings had roof damage from a tornado that struck Plymouth in Wayne County.

1928: Tornadoes struck across Lower Michigan. A tornado hit in Mason County south of Scottville damaging at least three homes and injuring two people. The roof of one home was carried over a mile. Another tornado destroyed several barns, killing cattle about 2 miles south of Cedar Springs in Kent County. What may have been a tornado took part of the roof off a factory and warehouse in Grand Rapids.

1886: A swarm of tornadoes hits southern Lower Michigan from late morning into the early afternoon. At least ten separate tornadoes struck, causing damage in Cass, Livingston, Kalamazoo, Eaton, and Clinton Counties. One person was killed and another injured in a tornado that hit Brighton.

1899: Grand Rapids records a high of 98 degrees, setting the record for its hottest September temperature, which would be tied on September 2, 1913.

1973: It was a record cool day as clouds and rain held high temperatures in the 40s across western Michigan. The high of 47 degrees this afternoon at Grand Rapids would be followed by a record low of 35 degrees the next morning.

1977: Two tornadoes struck Lower Michigan. One person was injured in the town of Flushing in Genesee County. Thirty homes and a library sustained heavy damage there. Another tornado hit near Westphalia in Clinton County, damaging a house and a garage.

1918: A tornado destroyed a large barn about 5 miles southeast of Grand Haven in Ottawa County, and carried the timbers a half mile.

Get ready for frost and epic cold! Big front will be moving through! Keep it coming!

Speaking of football! The lions are the worst pro sports franchise in the world! This past Sunday was the (Sol) same old lions! Another epic game they gave away! This has been happening for over 50 years and no change in sight!

Sally made landfall as a Cat 2. Still only moving at 3mph – a walking pace. Saw one met this morning say that Pensacola area could get 25” of rain along with 5-7 foot surge in the bay. Historic flooding is imminent. I could not imagine.

Return back to mild temps and more summer-like weather next week. I love it! Today looks summery too.