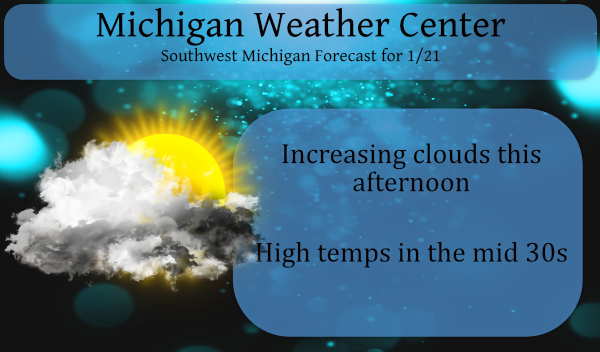 I had to go to Allegan to have a CT scan yesterday.  While in the waiting room there was a gentleman spouting off about how stupid weather people were and they may as well throw a dart at a forecast chart.  I informed him I was the owner of the Michigan Weather Center and proceeded to tell him all the variables of weather patterns and not to put much credence into a forecast more than a couple of days out.  All in all, it was a friendly conversation though it is hard to recognize facial expressions whilst wearing a mask.  There were a dozen other people in the waiting area and they listened with interest to our conversation.

Long-range models are fun to look at however they change daily so I don’t get my anticipation up about how warm or cold they say it is going to be.

That said we will have some sunshine today giving away to clouds late and some more snow showers overnight.  Here are yesterdays snowfall totals: 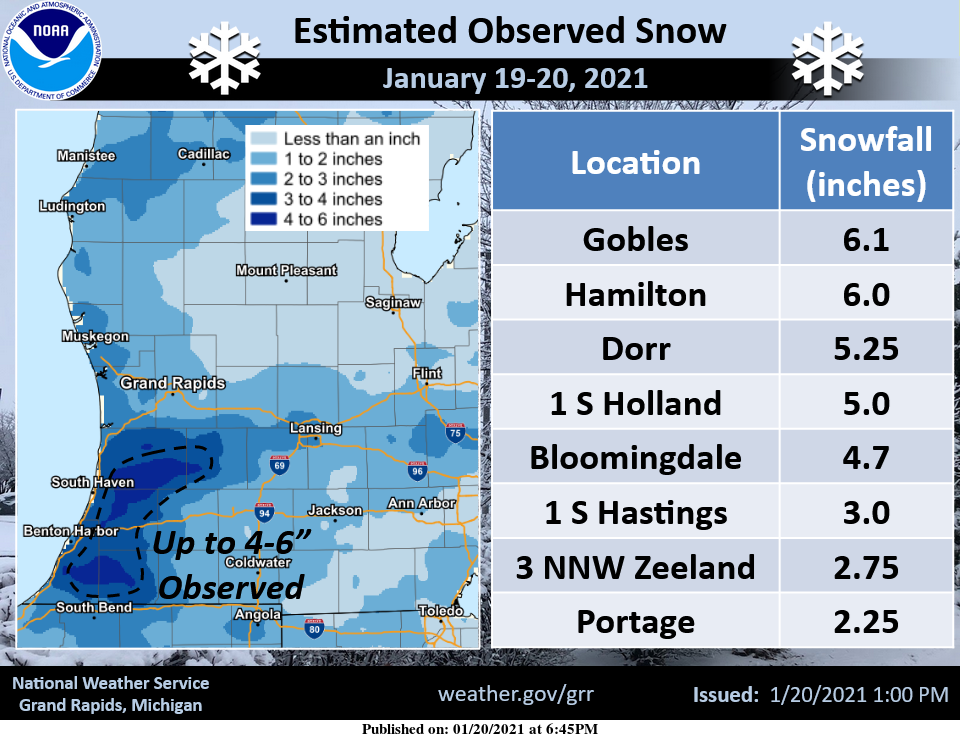 The latest models for the system early next week have moved the snow way farther south – like Indiana border south.

Yes the mid range EURO models are wrong again! They have been horrendous this season! Basically the EURO model is worthless until you are a couple days from the event! Horrible!

Hopefully that is for central and SW lower MI!

I can’t think of anyone that would not want a snowstorm right about now!

From Bill Marino/this afternoon’s forecast discussion re: Monday (and Thursday) – Possible snow storm Monday and Thursday The southern stream tries to get active again this coming week. Since the ECMWF (as typical) is slower moving upper waves out of the Southwestern CONUS, it allows a better and strong system to head this way than does the GFS which is likely to quick in moving this system east. The ECMWF has had this storm impacting us for at least 6 model runs in a row. Meanwhile the GFS is had it not impacting us for those same model runs. Nearly… Read more »

The storm system for Monday, at least at this point, is looking like a 50/50 hit/miss. We probably won’t have a clear idea of what will happen until more ensemble runs converge to a solution. Let’s keep our hopes up that the GFS is wrong this time around.

I agree with your sentiments, however my observation this year is that the EURO mid range models have been horrendous. The GFS have actually been a little better but I don’t buy any of the models on the Monday storm yet. The current trend is for most of the storm to miss us the South but plenty of time to change.

Well with lots of sunshine today and no snow on the ground, temp is up to 41 degrees! What an incredibly mild day for late January!

My area 36* degrees feels lots colder with wind blowing and all the snow on the ground today probably would of made it into the 40’s if we didn’t have them factors but no cigar …Had a blast sledding nows it time to hit the Bailey’s and stoke up a fire on this Thursday afternoon who doesn’t love January??? DDDDDD INDY …

I love January and February and March!

Well for all the posts about this great snow pack we’ve had for months, here’s some visual proof. First pic is on Main Street in Zeeland by Herman Miller:

Second pic is a grab from my dash cam on Chicago Drive between Zeeland and Hudsonville:

Boy, look at that snow pack! Tough for some to swallow but as Slims stats show, this is a HISTORIC snow drought!!

Thanks for the facts!

The sun melted alot of the snow here. My driveway and the street are dry.

I just smile and shake my head when ignorant people think they can do a better job than a meteorologist.

The street out front is clear and dry thanks to the warm sun.

Throw the snow counts away!! This winter has been lots of fun we have had more snow pk on the ground longer then anytime last Winter
in my area and guess what we have temps in the 20’s this weekend and more accumulating snows coming Sunday great Scotty!! Back loaded Winters always the best right??….INDY

Even you can’t spin this all-time record snow drought! GR has only had 6 days the entire winter with more than an inch or two of snow pack.

Wow – warmth and no snow records! This is the dream winter! We have to be at least top 10 warmest meteorological winters ever so far I’d bet. Even more impressive if you threw in November.

The December 2020 mean of 32.4 was the 23rd warmest December and the current January mean of 29.9 while +5.4 is the 11th if that were to hold to the end of the month. So unless the rest of January and all of February are much above average it would be hard for this winter to be in the top ten as for snow fall we are now in the running for the least snow of any winter season here at Grand Rapids. And are now -33.7″ below where we should be on this date.
Slim

The months, by themselves, aren’t that impressive. But when a top 23 month is combined with a top 11th month, that would have to be top 10 I’d imagine over that 2 month period. We’ll see how it all shakes out.

Even though some on here were saying how “cold” yesterday was, it ended up being yet another above average day! GR currently reporting only 1″ of snow on the ground.

Those pesky CPC maps have us still above average going into February. The Winter that never was heading into its final month.

Winter is slowly dying already! I love it!

Last March, the coldest high temp we saw was only 35 degrees, and we also saw 11 days in the 50’s and 60’s. So winter is often pretty much dead by March in Southern Lower Michigan.

There are some hints of another polar warming. I would not be too surprised if there is a colder than average late February and March. But who knows maybe it will stay mild all winter. As that colder than average is just a guess and your guess is just as good as mine or anyone else for that matter.
Slim

For what it’s worth, Accuweather has a very mild back half of February for GR with 7 out of 11 40+ degree days to finish the month.

I don’t mind snow when it melts within hours! That’s not winter.

Another beautiful Winter day with plenty of snow on the ground and more cold and snow on the horizon who doesn’t love back loaded Winters?? …. Lastest out look from snowmageddon plenty of snow and cold through April great Scotty lol…INDY

Rather odd last night with clear skies in late January for the temp to climb almost 15 degrees. Very sunny and mild this morning as we start gaining daylight at a faster pace each day. What happened to this weeks arrival of the polar vortex?

The vortex has mostly been propagating to Siberia where temps have been below -50 degrees. The polar vortex has become very stretched out and wobbly, it has not displaced as strongly southward into the northern CONUS or split as clearly into two lobes so it is hard to tell if and when we will have a true polar outbreak. The next two or three weeks will tell.

For snow lovers viewing pleasure here is the super long-range guess for February and March from Dr Judah Cohens weekly vortex report (don’t get to excited, it is just a guess): 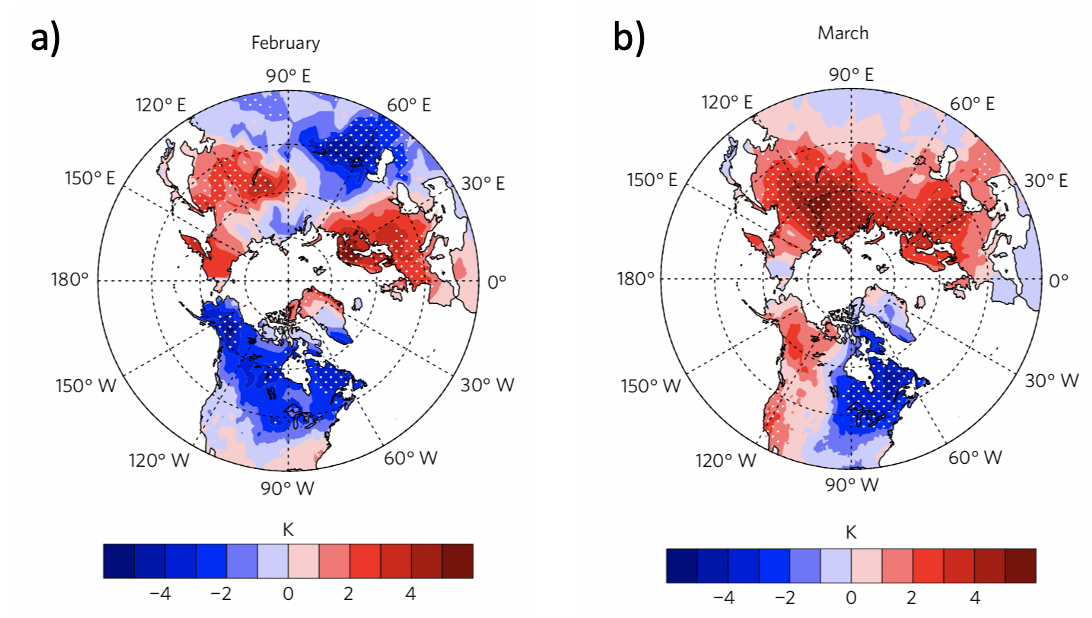