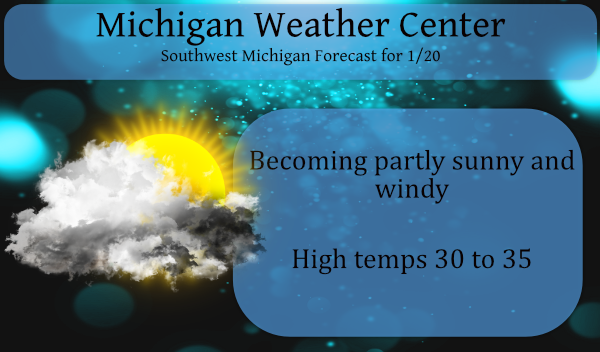 We had a nice four-inch snowfall over the Otsego area overnight which brings our total for the month to 8.7 inches and 14.4 inches for the winter season.  It took a while but we finally surpassed the elusive one-foot mark.  We only need another 25 inches to beat last year’s snowfall total.

Today we should see some sun though it will become breezy this afternoon bringing down the windchill temps. Winds will come from the southwest with gusts up to 24 mph.  Along the lakeshore north of Holland you can expect winds of 35 to 45 mph. 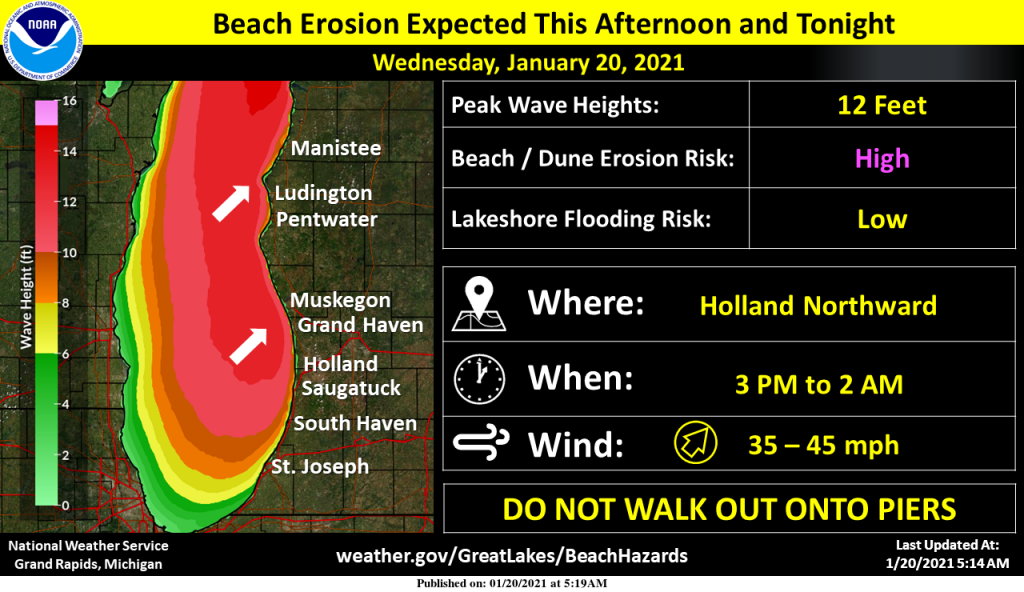 1952: Temperatures rise to record highs of 61 degrees at Battle Creek, 59 degrees at Lansing and 56 at Grand Rapids.

1982: For the second time in a week, extremely cold arctic air drops temperatures to record low levels. The low of 9 below zero at Muskegon is followed by an afternoon high of 7 above. It is even colder away from Lake Michigan where high temperatures remain below zero during the day. Lansing has a high of 1 below and Battle Creek maxes out at 3 below.

1857: Extreme cold weather prevails across the eastern United States. In Lower Michigan, a temperature of 28 degrees below zero was reported in Grand Rapids.

1976: Arctic air and deep snow results in record cold across interior Lower Michigan. The temperature plunges to 25 below zero at Lansing and 20 below at Jackson. Along Lake Michigan, clouds and an onshore flow keep lows from falling below zero. The low of 10 above at Muskegon is 35 degrees warmer than the low at Lansing.

1996: A blizzard moving through the Dakotas pulls warm air up over Michigan. Record highs in the upper 50s and lower 60s are followed by a line of heavy rain and severe thunderstorms. At least one weak tornado is spawned by the squall line, which is quickly followed by a blast of arctic air and rain changing to snow. Rapids snowmelt and heavy rains, followed by a quick freeze, leads to many areas of ice jam flooding.

1907: Southerly winds bring moist and mild weather with highs in the 50s followed by heavy rains as a cold front moves through. Grand Rapids sets a record high for the date of 56 degrees along with a record rainfall total of 1.84 inches.

1979: A homeowner was killed when his garage roof collapsed due to the weight of the snow on it. Several other homeowners suffered injuries as roofs collapsed throughout southwest Michigan. There were more than 50 reported roof collapses by the end of February, with most of the collapses occurring in the second half of January. At one point the snow pack was measured as weighing more than 25 pounds per square foot.

1994: Temperatures remain below zero all day long. Extreme cold prevails from the 14th to the 21st but this is the coldest day. Grand Rapids ties the all-time record low for the month of January with 22 below zero, followed by a high of only 2 below zero. An unofficial low of 53 below zero is recorded in the Upper Peninsula at Amasa, Michigan. Water and sewer pipes freeze, causing 50 million dollars in damage across Michigan

1906: Temperatures soar into the 60s after a warm front moves through. Grand Rapids hits 64 degrees and Lansing rises to 62, the first of three days of record highs at Lansing.

1985: A vast stream of arctic air keeps high temperatures from rising much, with highs of zero degrees at Lansing and one above at Grand Rapids, along with a bitter west wind gusting to 25 mph.

1984: The temperature hits a record low of 15 below zero at Grand Rapids for the second consecutive day. The temperature at Lansing only manages to reach zero degrees during the day.

1883: Bitter cold arctic air sends the temperature down to 14 below zero at Lansing and 8 below at Detroit. The high for the day at Lansing is 4 below zero, the coldest high temperature ever in the month of January there.

2005: A blizzard drops a foot of snow across southern Lower Michigan with strong winds creating drifts up to 4 feet deep.

1909: Lower Michigan is in the midst of a three day stretch of warm weather. Lansing hits a record high of 60 degrees. Grand Rapids reaches 56 degrees, also a record.

1948: Record lows on this date include 19 below zero at Grand Rapids and 13 below at Muskegon as arctic high pressure and deep snow cover have Lower Michigan in the deep freeze.

Feels like 10* degrees outside brrrr that’s the January I love …INDY….

Is that another heat wave building I see for the end of January?!

Great day to be an American! Thank God! This is one of the happiest days of my life!

Im preying for our new President and America! Add some more snow to that thought to INDY !!

I’ll put my full support behind President Biden. He seems like a good man and I pray that we can all come together as a country.

Good! Now do your part and mask up and stay home!

My area 21* degrees with snow worries 3.4 inches of snow or so on the ground a perfect winter day to play around…..INDY

Great Winter weekend ahead temps in the 20’s with snow showers becoming heavy at times especially Sunday into Monday winter weather advisory criteria again shuuu …I’m seeing a ice fishing trip in the making maybe I will snowshoe over to the lake keep the truck at bay get outside and enjoy Winters best …INDY ..

Barely over an inch of snow, not even enough to use the snow blower. Getting close to the double digit mark for the season of 10 inches at the end of January. The snow drought continues.

Was not aware the NWS now had an official reporting station in Zeeland. Interesting.

Just being posted on there website probably a true fact lol…..INDY..

Great job INDY! The warm weather fanatics always under report snow and always say the snow was not as bad or not as much as forecasted! It is like clock work!

We got about 3″ here. Maybe 4″We were plowed out. It’s funny how that little distance makes such a difference.

I believe this week represents the coldest week of the year. And yet we’re only talking about upper 20’s, 30’s, and 40.

Soon temps will be rising once again. Only 5.5 weeks until meteorological spring!

GR is reporting only a trace of snow on the ground. And still no big snow in sight! I love it!

It is looking very promising, especially up in snow country!

The garbage maps you posted 5 days ago were totally wrong! GR received basically no snow.

Another great winter day! They just keep coming and this is a great time of year!

For one of the few time this winter I can report that 1.2″ of new snow fell here yesterday and I now have a total of 1″ on the ground.  At this time there are a few flurries here with a temperature of 21. Officially Grand Rapids now has 4.1″ for January and now up to 9.4″ for the season.
Slim

Beautiful scene looking out my window as dawn breaks in Hamilton. I haven’t taken a measurement yet, but from the looks of the tire tracks from my daughter’s car, we had almost half a foot of snow. It’s about time! Maybe actually dust off the downhill skis this weekend : )

Skiing? Definitely. I have been skiing for weeks on end!