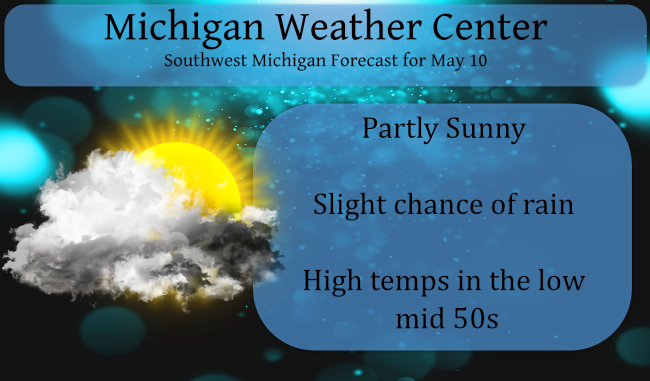 We have a temp of 37° this morning at 6 am with a few light showers trying to work themselves in off Lake Michigan.  We have only had .29 of an inch of rain so far this month as we continue through our dry spring.  The CPC is predicting a warming trend with a slightly better chance of seeing more persistent rain – they have been predicting higher than normal chances of rain since the beginning of the month so I would take that with a grain of salt.

On the other hand, most current models are now strongly hinting of a pattern shift coming from this weekend on into next week with warmer temps and better chances of rain closer to the one-inch range as they are showing the probability of tapping into the Gulf moisture a more reasonable assumption.  We have a lot of ground to catch up on in the rain department.

Freeze Warning are now in effect! I expect lows in the area to dip into the 20’s again! Who would have thought? Wow!

Just another night with the furnace running in the middle of May wow …Cover up them plants …INDY ..

Is this going to be another thunder-free spring? Looks that way so far.

That sure looks to be the case. According it GRR records there were 3 days in April when at least one rumble of thunder occurred. The same number of days with a least one rumble happened in Lansing.
Slim

Yes cold for this time of year thanks for the numbers Slim ….In Slim we trust ….INDY!!

Breaking news>>>>Memorial weekend will not be a hot one! With any luck it will be near to slightly above normal!

And remember you said last week 50’s and 60’s are February like weather.

Wow February weather in May!! Who knew?? INDY

Yes and at my house I had 2 nights were the lows dipped into the 20’s, in fact tonight might be the 3rd! Incredible weather!

Yes low temps in the mid 20’s and low 30’s are February like let’s be real for a minute even crazzer when it happens in May right?? I’m sure Slim will agree on that …Shuuu INDY

To bad “you house” does not count as an official observation location. Maybe someday.

Clearly we are and have been entrenched in a cold pattern!

I forgot he runs his ac if the temps get above 60 degrees!

Coming from someone with a cold weather obsession one would think you could relate to someone else who also likes it cool. Nope.

What an astounding cold pattern! More frost and freeze warnings are imminent! Get prepared now! This has been and incredible cold snap! It started in mid April and is still going strong! Wow!

The outlooks agree with MV, pattern change ahead. Looking like Memorial weekend could be a hot one.

As I lay here with the furnace cranking again I looked ahead around Memorial Day weekend wow does it look cold for this year I would not put away the Winter coats just yet great Scotty I say!! It just maybe a polor plunge into lake Michigan for some on Memorial Day …. Enjoy another cool day in May ….INDY …