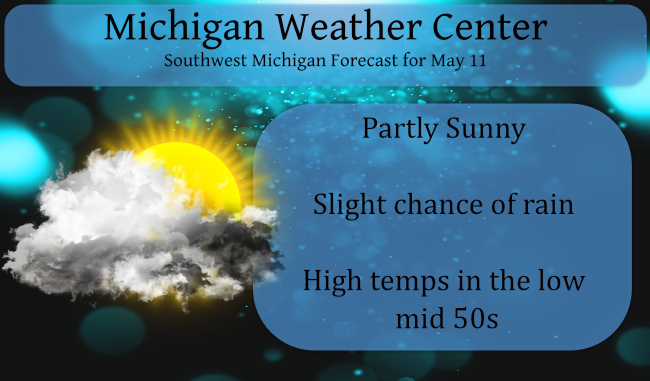 We had a trace of rain yesterday which amounted to a few sprinkles.  Temps this morning are below freezing once again.  We currently have 28° at 6 am.  Our freeze warning continues through 9 am.

It has been pretty boring being a weather person this spring with few if any events to get excited about.  It has been a concern as we go through the last month of spring locked in drought conditions. There is more on this in the forecast discussion (in blue). There is a 20% chance of rain showers this afternoon and evening.  Other than that we don’t have a decent chance of rain until next week. 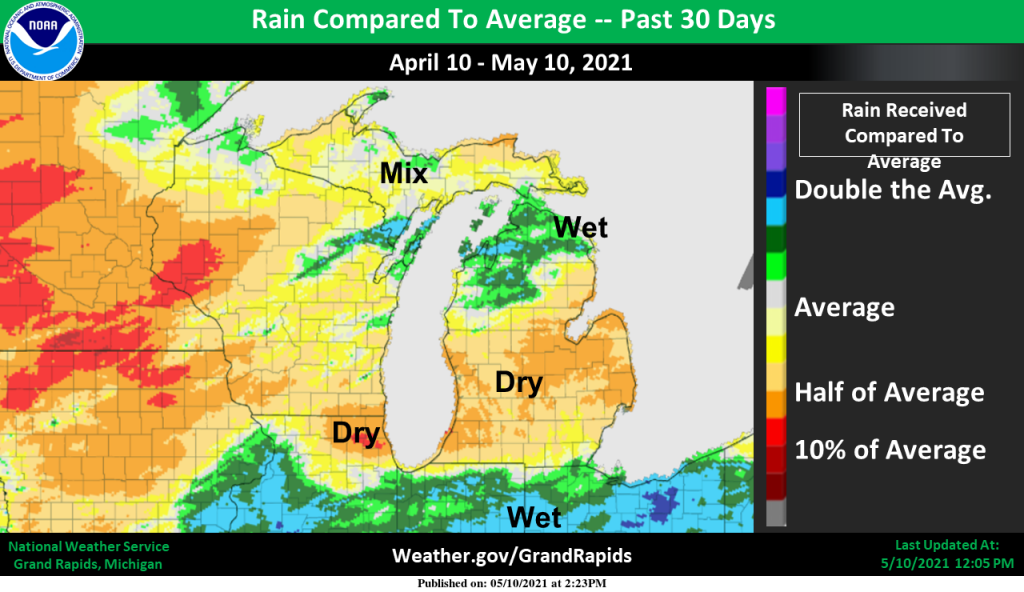 Much of the southern half of Lower Michigan received half the normal amount of rain over the past 30 days. Northern Lower Michigan is running a little above average but nothing overwhelming, while it’s a mixed bag in the U.P. though fairly close to normal. A soaking rain on Sunday slipped by to the south of Michigan.

The next next 3 months will be nice giving our furnace a break looking forward to it ..INDY

This could be a record breaking cold Spring! Incredible!

Has Spring weather even started yet??? Lets be real here ….Another Frezzee warning tonight how many is that now since so called Spring has started ??? Asking a friend….INDY

Just like from the mid of February till halfway through April was week after week of above normal temps. Funny how it all works out that way.

At the current time the official temperature is just 50 at Grand Rapids if it fails to reach at least 55 it will be one of the ten coldest maximus for any May 11th at Grand Rapids.
Slim

It continues to be cool and dry. The low here at my house was 33 and it looks like the official low at GRR will be 34. At this time it is clear and 39 here.
Slim

Wow, for the region it’s the driest year since 1958 and 4th driest ever! Those are records we really don’t need to be chasing down. Wasn’t it last year or the year before we had our wettest year ever? What a flip!

That is true. And guess what how long do you think it will be that people that live along the lake shore (and even inland lakes) will be complaining that they have to “drag” their boats out to the water and that their docks are not in the water anymore.
Slim

NWS GR is trying to outdo our resident almanac, Slim. Or are you moonlighting for them, Slim?

Dry here. Very dry here. 36 here this morning and once again (thankfully), no frost. Our local met said that today will finally be the last truly cool day.

It’s nearly impossible to sleep in nowadays. It’s getting light out at 5:30 am and birds are chirping like there’s no tomorrow.

I know the NWS is trying to do my job but they get paid for it LOL
As for it getting light at 5:30 just think some people want to stay on standard time all year long and if that was the case it would be getting light out at 4:30
Slim

Good point. I guess that’s the downside of being on the far western edge of the time zone.

I personally think we should stay on our current time all year. It would be nice to have light until 6PM in the winter (the morning would be dark, but it is dark while I drive to work anyways, so there would really be no difference in the morning).