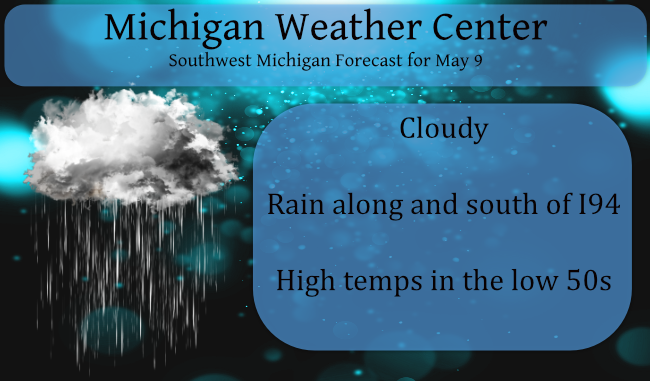 We have 38° this morning at 6 am which is 10° warmer than we had for a low yesterday morning as we continue with our cool pattern.

We have threats of widespread frost over the next three nights which isn’t typical though not unheard of for early May.  Last year at this time we also started out the month of May on a cool note before it warmed into the 70s and 80s, the difference was we had more rain last year.  We should be back in the 60s by midweek and near 70 by the weekend.

Rain chances diminish as you go north of Kalamazoo today, along I94 and south will be the greater chances.  Our next chance of rain won’t be until the end of the week.

Last year we ended May with 6.25 inches of rain most of which fell the second half of the month. We had 12.81 inches for March, April, and May making it a wetter than normal spring. (these are Otsego totals).  This year we have had 3.44 inches for the same period.

What an incredible cold spell! More freezing temps are coming! Get prepared!

Crazzy I just saw a NFL commercial coming in September then I thought wow September is only 4 months away but then again with no fans last season due to covid-19 they are getting ready excited sooner with fans this season!!! It’s great seeing things getting back to normal again and seeing less and less people wearing mask soon all sporting events will be full again ….INDY ….

We need a lot more people to get vaccinated before we return to normalcy!

Looks like we get a taste of summer soon. CPC maps getting the shades of red again.

Just realized why this month is called May.

Frost advisory for Grand Rapids tonight middle of May and we have frost advisorys going on wow well way better then heat advisorys lol….INDY

52* degrees in my area well below average day again who knew?? Our cool Spring continues ahhhhhhh….INDY

So far this meteorological spring has been much closer to average than many would think. With a very cool period since mid April off setting a very warm start in March and early April. We will have to see how the rest of May plays out to get the finial outcome.
Slim

Happy mother’s Day!! Lots of weather mom’s out there enjoy your day ….INDY!!

No rain till the end of the week? Ugh, boy it is dry for this time of the year. Boring weather pattern we are in again. However the sun is coming out of its dormant cycle. Very active sunspot turning earthward the next couple of days. https://spaceweather.com/

The month of May is now below average at most locations. And in the last 27 days there have been 22 days below average and only 5 day above average. The over night low here was 37 and at this time with cloudy skies it is 41. It has not only been cool it also has been some what dry. Officially at GRR they have reported 1.04″ of rain in the last 27 days while here at my house I have only recorded 0.78″ of rain fall.
Slim

Wow to the wow 22 days out of the last 27 and still going strong below average I think we can officially say this has been a cool Spring yes hard for a few to say but when slim post the facts come out!! INDY

What are the totals so far for Met Spring? As in how many days above/below since March 1?

Since March 1? Out of 70 days only 24 below? You’re making yourself look bad if that’s the total.

Again in Slim we trust with the facts! Yes our cool Spring continues thank you Slim ….INDY

Kind of shoots down your theory as 37 days above beats 33 days below.

You answer your own question!! Wow! INDY….

Sorry, no. Scroll up and see that Slim answered my question.