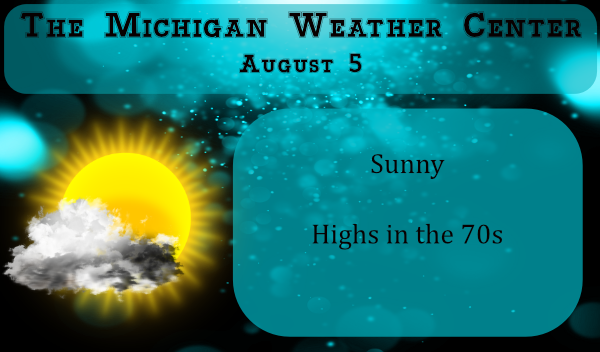 We have 48° at 6:30 this morning – the last time we had a low in the mid-40s was back on June 15th.  Yesterday’s high was 70.1° and most of the day it was in the upper 60s.  It was also mid-June when we began the met summer cooler than normal before the heat was turned up at the end of the month.

1927: Morning low temperatures fall into the lower to mid-40s during one of the coolest Augusts on record. Daily record lows are set at Lansing with 40 degrees, Muskegon with 42 and Grand Rapids at 46.

1964: Muskegon sets an August record and ties their all-time record high temperature at 99 degrees. The temperature hits 100 degrees at Grand Rapids, a record for the date.

1894: The second record cool morning in a row at Lansing with 37 degrees. Grand Rapids also sets a record low for the date of 42 degrees.

1988: A hot and dry summer continues with record highs of 96 degrees at Lansing and Grand Rapids and 92 degrees at Muskegon.

1947: The temperature hits 93 at Muskegon and 100 degrees at Grand Rapids, where it will reach the century mark again the next day. A total of 17 days during the month had high temperatures of 90 or above at Grand Rapids. This is the hottest August on record for Lansing, Grand Rapids and Muskegon.

1955: A tornado injured one person in Hastings and another tornado caused minor damage near Norvell in Jackson County.

1998: A small tornado downed trees and did minor damage to an outbuilding at Hamilton in Allegan County.

1900: An eight-day heatwave continues with temperatures in the lower to mid-90s. Adding to the discomfort are warm and muggy nighttime low temperatures that only fall to the mid and upper 70s.

1996: Heavy rains of over 3 inches flooded roads and streams in Lansing and Grand Ledge.

2008: Several waterspouts are observed over Lake Michigan from Grand Haven to South Haven. At least one of them appears to come onshore, but no damage occurs.

1894: Only four days after record cool weather in the 30s and 40s, the thermometer soars to record highs of 96 at Grand Rapids and 99 at Lansing.

1939: A tornado outbreak across central and southern Lower Michigan resulted in two deaths and about 100 injuries. A violent tornado moved across the southeast part of Kalamazoo, destroying dozens of homes and killing two people. More homes were destroyed and six people were injured in northern Kent County, northeast of Cedar Springs.

1977: A tornado destroys a barn and trailer north of Marion in Osceola County.

Congrats to the states of FL, AZ and LA – you now have more corona virus cases per capita than New York! Incredible!

Please don’t forget to subtract the numbers of people that have gotten better from the positive cases that doesn’t seem to happen with this Chinaaa virus interesting….INDY

Indy you name a state and I will tell you how many are active and how many have recovered or died. As of 5:45 PM today FL, AZ and CA have more active cases then New York. Michigan has fewer active cases than New York total. Not sure how many cases of ” Chinaaa virus” there are anywhere.
Slim

Rock on slim! You are the man and as always thanks for the FACTS!

Currently FL has nearly 450,000 active cases! This is more than most countries in the World! they are in horrendous shape!

23,450 have recovered in Florida and positive cases are coming down everyday now I’m thinking like New York Florida has had there peak so numbers will keep dropping and will not come close to the deaths in NY and New Jersey thank goodness funny how there is never no positive talk about the chinaa virus probably come November 3rd if Hiding Joe Biden wins the presidency the chinaa Virus will be unheard of like durring the protest you can count on it …..INDY

Just don’t forget to subtract the the recovers from the active cases going on it doesn’t happen and it should and when it comes to deaths no state will come even close to NY or New Jersey thank God …..Yes the Chinaa virus …INDY

The new European seasonal is out and is has hints of warmer and near average rain fall for September to November.
Slim

More above normal temps on the way. Facts. Spinning it may cause dizziness.

From Bill’s Blog – there has only been one tornado watch in Michigan this year, and it was only for Berrien county. Michigan averages 16 tornadoes per year. This year, we have had none.

Yeah it’s been pretty quiet for several years now. No thunderstorms, no snow storms, just kinda of a dull above average pattern for a long time.

Absolutely gorgeous morning. It’s usually so humid in these parts, we need to use the A/C just to dry out the air. Not last night and today. Windows are open and cool fresh air is blowing through the house. This is my kind of weather.

The official low at GRR was 52, here at my house the low was 50. At the current time it is 55 here with clear skies.
Slim

This would be the perfect temps year around!