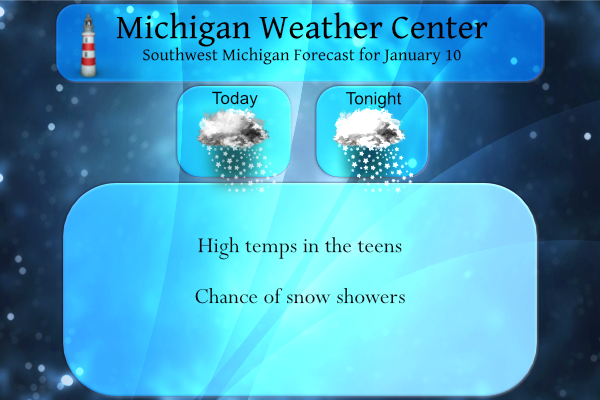 Temperatures north of Grand Rapids are in the single digits this morning and in negative territory in the U.P.  With the Great Lakes protecting us from extreme wind chills, we are lucky to be spared from what northern Minnesota is experiencing today as the coldest air of the season moves in.

Light lake effect snow showers may bring localized accumulations of an inch or two today and tonight west of Highway 131, which could also lead to hazardous travel conditions.

Great winter so far and much more to come! Get ready to rock!

11 to 15 day out look below normal temps that means above average snowfall thanks Lake Michigan woo woo wooo woooo ….Up here on Boyne mountain it has snowed every day sofar snow snow snow 94% of the state of Michigan has snow on the ground who knew?? Its the most wonderful time of year …InDY

Almost half of the states had either their warmest December ever (10) or their 2nd warmest ever (14) and the country overall with it’s warmest at almost 7 degrees above average. Here in Michigan it was our 8th warmest over all.
Slim

Welcome to week 2 of winter. Back to below average seasonal snowfall by the end of the week or next?

Here is the definition of winter
Winter noun
win·​ter | \ ˈwin-tər
1: the season between autumn and spring comprising in the northern hemisphere usually the months of December, January, and February or as reckoned astronomically extending from the December solstice to the March equinox
2: the colder part of the year
Note there is no mention of there having to be snow for it to be winter. So it has been winter since December 1st just like always.
Slim

We are definitely at the coldest time of the year. The next 3 weeks are the coldest on average. Although if you like warmer weather… then that means average temperatures will start to rebound in a couple weeks (very slowly at first and, as we know, it is rarely “average” in Michigan)

Temperatures held steady overnight and the overnight low here was 13 at this time there is some very light snow falling with a temperature of 14. Temperatures are forecasted to hold steady today as the high is guessed at 15. The snow on the ground has compacted down to 8″ here as of this morning. All in all this week looks to he ho-mum with not a lot happing other than a warm up with the winds expected early in the warm up it will not feel all that warm.
Slim