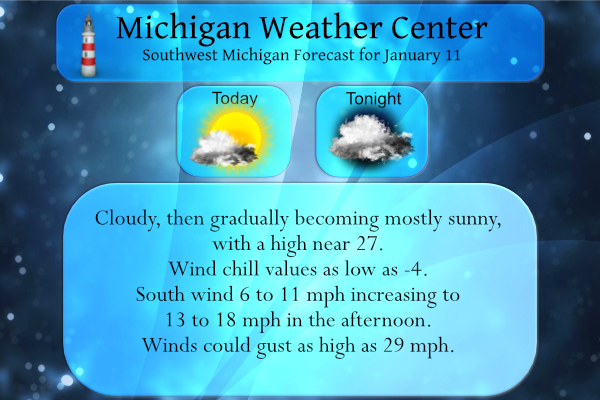 We have 11° this morning in Otsego (at 6:30 am) with a dusting of new snow overnight.  Yesterday’s high temp was 18.5° with a low of 10°.  We will see another cold and mainly dry day today. The region will see increasing wind with gusts near 30 mph. Then temperatures will rebound to about the freezing/melting point on Wednesday. Some light snow is possible at times Wednesday. Most of the region will see an inch or less of accumulation. A small chance for light snow exists for the end of the week as an arctic airmass returns to the region.

The CPC is suggesting below normal temps right into the first week of February with mainly below normal snow, though precipitation guesses seem to change daily.

The cloud cover held the temperatures up last night and the low both here and officially at GRR was +9. There was a trace of new snow fall the official January total still stands at 19.0″ for the season it remains at 38.8″ and here at my house there is 7.5″ of snow on the ground. At this time it is cloudy and 13 here.
Slim

We drove in Sunday to Boyne mountain shuuu it hasn’t stop snowing yet …..Amazing Winter we have going..InDY