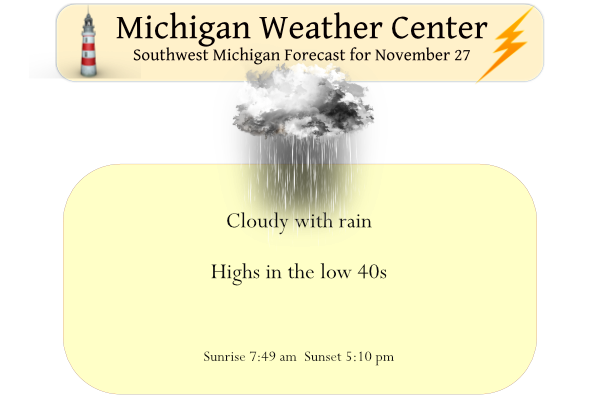 Michigan made a statement yesterday with their beating up on Ohio in the second half leaving with a 43 to 23 victory over the Buckeyes.  Congrats to the Wolverines who now own the title of the Big Ten East.  Michigan captured the division title for the third time and finished the 2022 regular season 12-0 overall and 9-0 in conference play, the team’s first undefeated regular season since 1997. The Wolverines also clinched their third overall Big Ten East Division title and their second in as many years. They now play Purdue (8 and 4) for the Big Ten Championship title.

Rain can be expected today as low pressure lifts north out of the Gulf region. Some wet snow could mix in across Central Lower Michigan, but travel impacts are not expected.  Rain amounts will be between a quarter to half an inch for SW Michigan with higher amounts to the east.

NWS Grand Rapids making mention to another possible significant cold blast in the extended range. Maybe get the lake effect going again for some areas?! Long ways out so lots can change. Something to watch

Awesome weather yesterday! We went to Millennium Park and hiked 5 or 6 miles of the trails there. I know it’s been there for some time now but we never really get out that way. Just an incredible place to spend the day with miles and miles of paved trails.

Yesterday Barry was wondering about the lack of official snow fall reports from the lake shore. I too have to wonder why Holland dose not report snow fall amounts. Anyway here is a list of some CoCoRahs stations near the lake shore. There are a few CoCoRaHS stations in the Holland area but not too many. There is MI-OW-49-Holland NE. MI-OW-14-Holland NNW. MI-OW-2-Holland NNE. MI-OW-54-Spring Lake-NNW and there is MI-OW-60-Jennson-W. Of course one dose not know how often and how good they are at reporting snow fall amounts. At station MI-OW-49-Holland NE the total for November is reported as 15.0″… Read more »

Yesterday was a very impressive late November day with 98% of possible sunshine a H/L of 54/31. There was no rain or snow fall and the snow is all gone except for the snow piles, there is still some in the woods but that is it. And of course, there was that big Michigan win over Ohio State. For today the average H/L is 42/29 the record high of 65 was recorded in 1909 and 1990 the record low of 5 was recorded in 1977. The largest snow fall of 3.8” was recorded in 1952. The rain has now started… Read more »

What a great day yesterday. The weather was great and the Wolverines took down the Ohio State Buckeyes! I love it! What an incredible game.

That game was an instant classic. Two heavyweights going toe to toe for the 1st half, and then M turned on the jets after halftime and never took their foot off the gas. I’m happy for Edwards. He’s been the #2 back this season and when given the opportunity, he shined – busted hand and all. It’s been too long since the B1G has won a national championship. I hope this is the year.