Clouds Increasing then Some Rain – The Michigan Weather Center
MichiganState Weather Alerts
There are currently no active weather alerts. 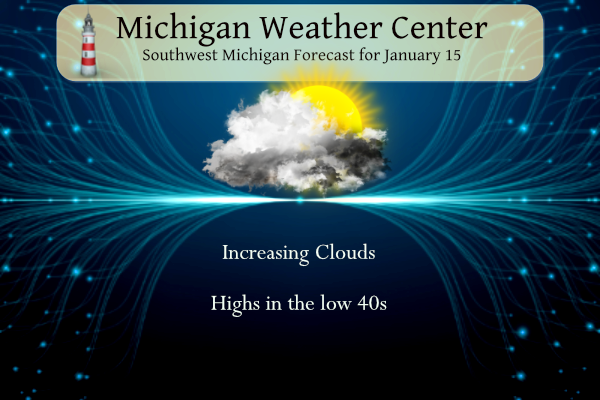 Clouds Increasing then Some Rain

We can expect filtered sunshine through high-level cloudiness today as temperatures push toward a high near 40 degrees. This somewhat boring weather pattern should break into a more active tendency towards rain then perhaps some snow in the Thursday timeframe though the track of that system is still up in the air.  With the exception of today, it appears most of the week will remain cloudy so we hope for at least some rain or snow events to break the monotony.

Lastest GFS MODEL slams lower Michigan with 3 system snowstorms now through the end of January followed by some artic air around the end month Winter is far from over folks .. Lets see how the cards play out ahead I would definitely get the snowpants back out …INDY

Hello MI? Can you say winter is returning! Incredible!

The latest models are moving the heavier snow to our North, however plenty of time for the track to sag South! Stay tuned! Bring it!

Second half of January and still rain in the forecast. When was the last below average temp day we’ve had? This has been quite a stretch!

Going on 3 weeks, pretty impressive for what was supposed to be a “brief” warm up. Even more impressive that many of the days weren’t just barely over average, but way over average.

I remember last year there was a lot of discussion about the winter severity. Slim (I think) had found a link of a measurement of the winter severity that attempted to numerically index it. I am curious how this winter is turning out. I wonder how it would handle the few big snowstorms but mild temperatures in between. Personally I would rank this winter (so far) as extremely mild. And In the world of expensive energy that may be a blessing for some.

According to the index, GR is average due to lake effect snows while most other locations are having an extremely mild winter.

So it seems the index heavily weights snowfall, GR hasn’t had much days with snow coverage, just a good amount of snowfall in short periods.

First off it was Mookie that introduced me to the MRCC index. And as of January 14 Grand Rapids was extreme in late December and is now average but heading toward mild. In lower Michigan only Grand Rapids and Cheboygan are average with all other reporting locations being mild. In Michigan only Ironwood is severe. To the east Buffalo is still extreme but Rochester not far away is mild. Here is a link to the site.

Our Weather has been cloudy for most of January with the lack of snow this month GR is still above snowfall
for the Winter season crazzy looking up stream seeing some old man Winter returning with increased snow chances and some bitter cold air around here abouts the 28th of the month with the lakes still warm great scott INDY says snow out or look out!! Have a good Sunday MV’s best …. I N D Y …

What? More cold and snow coming! You mean winter is not over and GR is still way above normal
for snowfall! Incredible!

Yesterday was fantastic. So many people outside enjoying the sun. The local 10-day forecast here keeps highs above freezing in the 30s and 40s. This has certainly been an abnormal month. The talk around here is the lack of snow:

And the talk on Mlive is the lack of ice:

Good morning! Well the sun finally came out yesterday and here in Grand Rapids there was a reported 91% of possible sunshine. The official H/L was 31/18 and that is exactly average for the date. There was no rain/snow and there was no snow on the ground. The overnight low this morning is the current temperature of 20. For today the average H/L is 31/18 the record high of 57 was set in 1949 and the record low of -15 was set in 1972 the record snow fall is 5.8” in 1997. This week should start off mild with a… Read more »