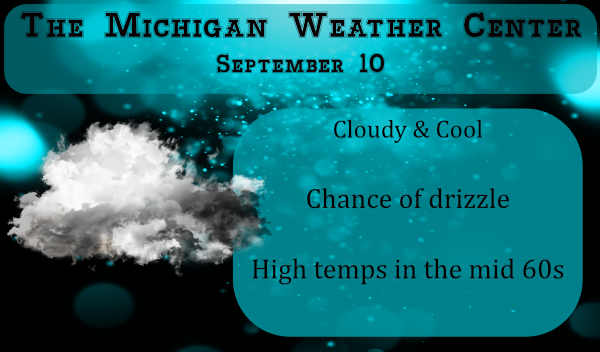 We barely broke 60° yesterday which held steady during the daylight hours with a trace of rain after 7 am.  After all the sunny days we had this past summer it sure has turned dreary which is a reminder of things to come in the Great Lakes region.  For the records, below are the 72-hour rainfall totals for the 6th through the 9th. 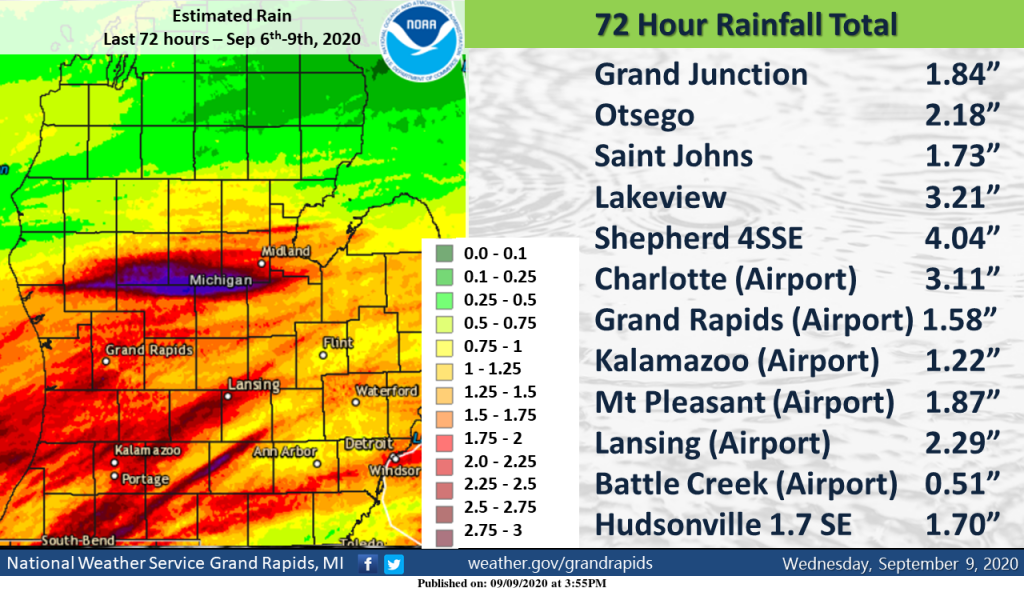 Today will once again be cloudy however we have hopes of the sun returning tomorrow.

Grand Rapids now has had 3 days in a row of highs only in the low 60’s. The highs on Wednesday were the 2nd coldest maximums for the day at Grand Rapids, Muskegon, Holland and at Lansing it was the coldest maximum since 1943.
Slim

Childish Banter on here is sickening,

WOW well join the fun ..A blog with no cues and political views allowed lol….INDY

Yes Slim lots of talk out there about Winter starting early in the Midwest that would mean more snow for the great lakes shuuu quick fact for mid September already 6.7% of the United States has snow cover on the ground amazing …INDY

Mookie is on tilt! He is delusional, but that is nothing new!

Just heard Muskegon had its warmest summer on record! Wow!

Muskegon just had there coldest September day for the 9th great Scotty….INDY

Fired up the snowblower she turned right over shes ready to blow …The rakes and snow shovels are out pool is closed up fire wood is staked it’s beginning to look like FALL around here heck it already feels like FALL that’s for sure what a work out yesterday never even broke a sweat lol……Have a great Thursday INDY ….

Before I bought my current snownblower I had a Craftsman that one would start great in the fall. But as soon as it got cold with snow that thing would not start. I used to have to bring the thing into the house and let it warm up before it would start. And that was from when it was new. I took it to Sears several times when it was still under warranty and they claimed there was nothing wrong with it. Well I sold it during one of my wife’s yard sales.
Slim

Yesterdays official high of 60 at Grand Rapids was the 2nd coldest maximum of any September 9th in Grand Rapids recorded history. I recorded 0.02″ of rain yesterday. At this time it is cloudy and 53 here.
Slim

So much for the 80’s and mid 90’s that was once predicted this week by the turn up the heat guys ..lol..only made it to 58* degrees yesterday out at thee YARDofBRICKS NE of GR so that’s a record in my book …love it INDY

Thanks for the cold facts! We are in an amazing cool stretch! Let’s keep it rocking!