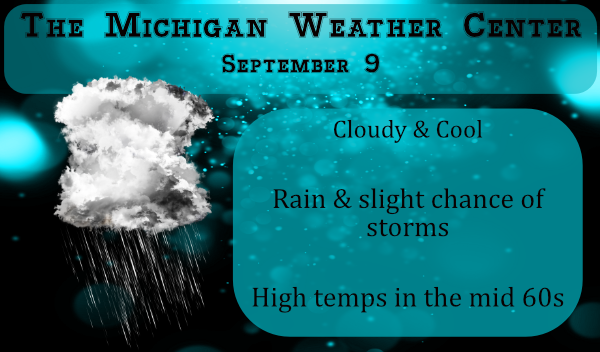 Yesterday we didn’t manage to get to 60° we came close with a temp of 58° for our high.  We will continue to see off and on rain today through tomorrow morning.  Today we should be a bit warmer with highs in the mid-60s in southern Michigan.  Chances of frost come into the picture in northern Michigan and the U.P. tonight.

We had 1.53 inches of rain yesterday early morning and .60 as of 7 am today.  This brings our today to 2.44 inches thus far for the month in Otsego.

1881: Temperatures hit the mid and upper 90s as a four day heat wave peaked across Lower Michigan. Lansing reached 97 degrees for their second record high in a row, both records that still stand.

2001: Severe thunderstorms produced widespread wind damage. About a dozen trees and several telephone poles were blown down in Saranac in Ionia County.

1874: One of the longest heat waves in the month of September is underway with Lansing hitting 95 degrees. Lansing would have eight consecutive days with high temperatures in the 90s from September 7th to the 14th.

1968: A tornado injures one person as it damages several businesses in Cedar Springs in Kent County. Another tornado damages a farm west of Monroe, Michigan.

2001: A tornado moved through Delta Township and into the western outskirts of Lansing causing heavy damage over an eight mile long path. There were minor injuries and several barns and other buildings were damaged or destroyed.

1986: Clusters of thunderstorms moving along a stalled front bring record rains to Lower Michigan for the second straight day. Widespread rainfall amounts of 2 to 5 inches result in extreme flooding and contribute to making September 1986 the wettest month on record across the area.

2013: A severe thunderstorm with wind gusts of up to 80 mph brought down numerous trees and power lines in Albion, Michigan. Albion college was closed for several days due to all the wind damage and loss of power.

1986: From 6 to 12 inches of rain in three days resulted in record flooding from Muskegon to Saginaw. The flooding was worsened by the collapse of several dams. Ten people were killed and damage estimates approached half a billion dollars.

We will have to see how much warmer it gets today. At this time the current temperature and high so far today is 58. The record coldest maximum for today is 59 set in 1924 and 1898. In 2nd place is 60 in 1901 and in 3rd place is 61 in 1943. At this time Grand Rapids is on tract for one of the coldest highs of any September 9th in recorded history.
Slim

On top of the cool below average Fall weather we are having shuuu we are breaking records in Grand Rapids Great Scooty!! Thanks for facts Sim …INDY

Sorry, not today. GR is now over 60. Great try though!

I’m wearing pants today, which is only the second time in the past six months. No dress code when working from home – unless I have a zoom meeting, and I will put on a nice shirt.

51* degrees out at thee YARDofBRICKS NE of GR September is great cloudy rainy cool FALL ….. Quite a few people on my weather page turned there furnace on yesterday to get the chill out of there house amazing for mid September…Have a super hump day …INDY

Our house is insulated nicely. It hasn’t dropped below 70 in here yet.

Do you think Barry’s ac is running full tilt!

Another 0.66” of rain here overnight. Grass is actually starting to get a little color back after being brown so long. Looks like our loooooong 2 day wet “pattern” switches back to a “sunny” pattern later today or tomorrow.

Wow, what a wet, cool pattern we are in! Incredible!

I recorded 0.73″ of rain overnight. Yesterdays official high of 61 at Grand Rapids was recorded just after midnight. Even that 61 was the coldest high at GR since May 18th And is now the 3rd coldest high for any September 8th in Grand Rapids history. During the day the temperatures stayed in the 50’s. At this time there is some light rain falling and the current temperature both here at my house and at the airport is 51.
Slim

Another rainy morning. I think it is going to clear some later today.

I hope so. The height of my grass has doubled in the past 48 hours. It is in serious need of mowing.