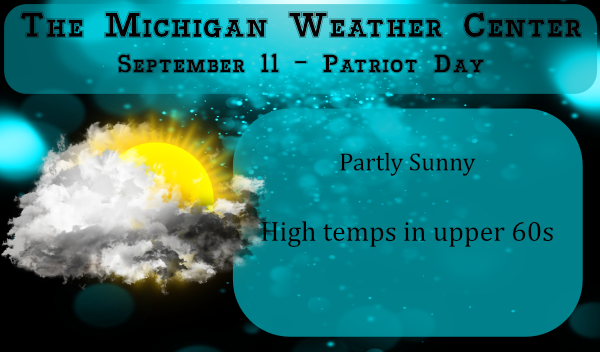 As the headline states the sun will make a brief return today before the clouds roll back in for tonight.  This has been a grim reminder of the cloudy days we have during the winter rather than seeing the sun.  We barely broke 60° once again yesterday which gave us three days in a row of 60 or below.

Today is the anniversary of the September 11th attacks on the world trade center and the Pentagon.  My first grandchild was one year old.  I remember the confusion, anger and sadness of that day; air travel was shut down for several days as the whole mess was sorted out.  This year we have Covid-19, the Black Lives Matter movement, the fires out west which will also go down into the historical record as we question our mortality.  Today we pause to consider we are each individuals in a large world of several billion other souls, many who suffer both in past and present issues.  Many live in a bubble of their own condition without looking outwards to their fellow citizens who share the same space with them.  Each person has issues great and small.  Whenever I feel I am suffering I look outward to see there are people with greater issues than I and count myself as blessed.

MV I like what you wrote – the last sentence.

Here is a video on 9/11. I had never seen this one before and it is worth taking the time to watch it.
https://www.youtube.com/watch?v=MDOrzF7B2Kg

First off a moment of silence for 9/11……………………………………….Here at my house I recorded 0.03″ of rain since 7 AM yesterday. One of the difference of opinion I have with CoCoraHS is the timing of the reports. While the NWS has their daily reports take at midnight CoCoraHS has the daily reports starting at 7 AM and thus reports do not match up. I know may who report on CoCoraHS are farmers and they do not stay up to midnight but just a point I would like to make. At this time there is a strange fire ball rising to the… Read more »