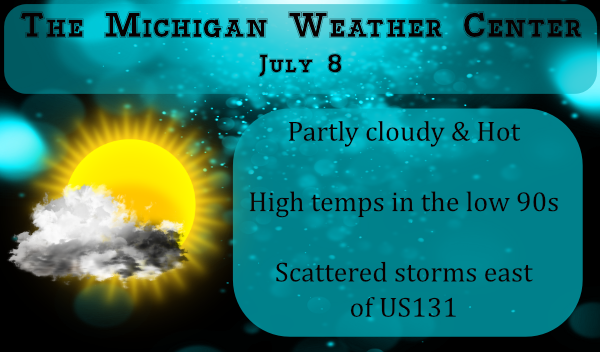 Another hot day is in store with scattered downpours or thunderstorms in the afternoon, most likely developing near and east of US-131. The chance of rain is 40%.  The further west you go the chances decrease to 20%.  Expect increased amounts of heat and humidity today and Thursday compared to earlier in the week, followed by a slight cool-down toward the end of the week.  By cool down I mean the mid-80s, so don’t expect to see the 70s anytime soon. 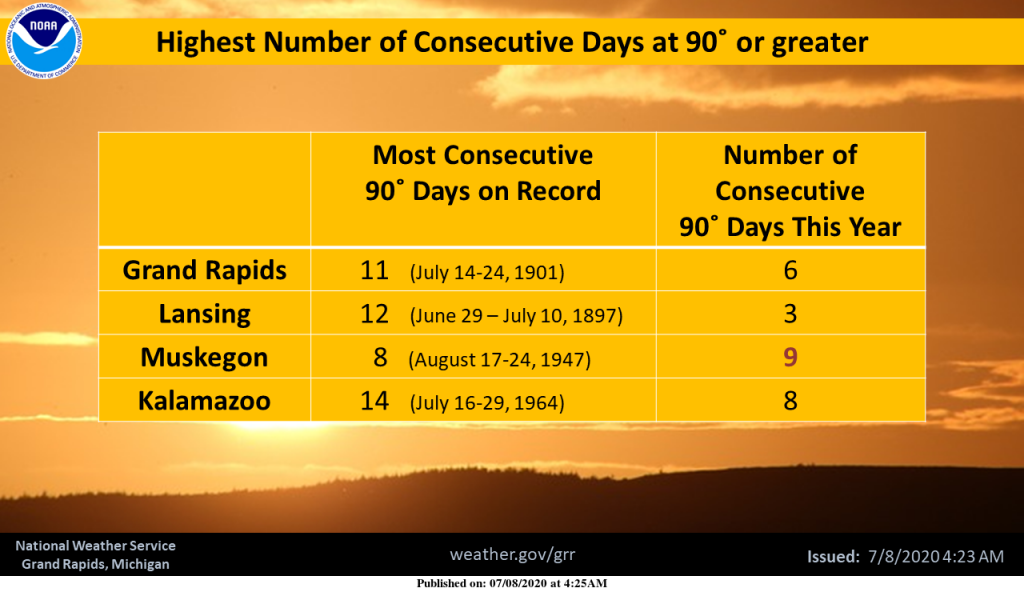 1921: A record high of 100 degrees at Grand Rapids contributes to July 1921 becoming the warmest month on record there with a mean temperature of 79.8 degrees.

1972: Temperatures fell to record lows in the upper 30s and lower 40s across the region. The 37 degrees at Lansing was the coldest July reading of the 20th century there.

1994: Thunderstorms with hail and heavy rain pound areas of West Michigan. The 3.56 inches of rain at Grand Rapids makes this the wettest July day on record.

1921: One person was injured by a tornado that destroyed three barns while passing north of Alma and Saint Louis in Gratiot County.

1983: Cool high pressure settles over Lower Michigan and temperatures fall to record lows. The 41 degrees at Grand Rapids is the lowest ever recorded during the month of July for the Furniture City.

2014: Severe thunderstorms roll through on the night of July 6-7th. At least four tornadoes struck from near Grand Rapids to Saint Johns. A tornado with top winds estimated at 110 mph did heavy damage in the Grand Rapids suburb of Kentwood.

1991: Tornadoes strike across southern Lower Michigan. A tornado damaged about 20 homes near Highland in Oakland County. More damage occurred near Okemos in Ingham County and a home and some outbuildings were damaged as a tornado moved northeast of Rockford in Kent County. A tornado also briefly touched down northwest of Plainwell in Allegan County but did no damage.

1988: Lower Michigan is in the midst of another heatwave as the hot and dry summer of 1988 continues. Temperatures peak at 100 degrees on the 6th at Lansing and Grand Rapids, followed by a record high of 98 degrees on the 7th at Grand Rapids.

1885: A tornado damages several farms in and near Allegan, Michigan.

1936: The greatest heatwave on record gets underway across Michigan. Grand Rapids will see high temperatures at or above 100 degrees on six of the next seven days, including an all-time record high of 108 degrees on the 13th. Lansing will peak at 101 degrees on the 14th.

1951: Severe thunderstorms strike West Michigan with dozens of trees knocked down. Some of the trees block roads and damage cars and buildings

1984: Record low temperatures are set as cool air from Canada dominates the Great Lakes region. Grand Rapids falls to 46 degrees and Muskegon to 45.

1956: Cloudy and cool weather prevails with a record low maximum temperature of 64 degrees at Grand Rapids.

1895: Record cold temperatures occur on the second consecutive day at Lansing. The low of 39 degrees follows a low of 42 degrees on July 9th.

1897: A ten-day heatwave, one of the most intense on record, peaked with highs near 100 degrees across the region. At Lansing, it was the third straight day with highs of 100 degrees, unprecedented in the record books.

1945: Muskegon falls to 40 degrees, setting a record low for the date. This is also the second coldest temperature for the month of July at Muskegon, just a degree warmer than the 39 degrees on July 2, 2001.

1957: Thunderstorms struck West Michigan with heavy rain and high winds. There was widespread flooding of streets, with some road washouts. The 3.19 inches of rain at Lansing made this the wettest July day of the 20th century there. Many trees were blown over by thunderstorm winds and lightning struck a TV antenna in Grand Rapids, burning out the transmission line.

1967: A tornado damaged a trailer, garage and silo about two miles west of Ferry in Oceana County.

Prepare for lockdowns again starting tomorrow. Hope your savings accounts are filled up, you’ll need it! Sorry to anyone who owns a business though, gonna be the norm for a while. Lock us down for three months then throw us some crumbs for a month before shutting us down again. What a nightmare!

I believe this time around lots will not listen to the governor my legion shut down for one day last week they said screw it we can’t risk having heat stroke having everyone outside they opened there doors back up going and still going strong it’s simple you don’t want to risk Covid19 stay home your choice that’s what’s screwy about all of this our freedom is being overtaken thank goodness we have a president with balls he understands our rights…She’s only one person how’s shes going to police it all good luck Gretch….Man 80’s this weekend look wonderful …Stay… Read more »

The problem is not with businesses being open the problem is people that seem to think that it is fine not to ware a mask. My take is no mask no services bottom line. At stores if people do not were a mask add a 25.00 surcharge on their order. But you know soon Michigan will have the same numbers as the great states to our south.
Slim

Hey Slim, Menards still requires masks to enter the store. That could be a start with other businesses.

Menards and Costco. No mask no service. Try going to the doctors without a mask they NOT let you in. Bottom line.
Slim

No mask no service. You are right. Also at the drs you better come with a mask on your face or you don’t get in and they do not have any to give you either.

Not a drop of rain here. Nothing but heat, clear sky, and rising clouds to the East.

Those might be ours. Even got some thunder. I don’t think I have never been so excited for rain.

Not one drop ever fell here either! The sun came out pretty quick. Like you said clear sky.

Holy cow, it is actually raining here. Not very heavily, but it is a beautiful sight.

Still raining. I am doing the happy dance.

No joke – it just stopped raining. It rained for 80 minutes.

Looks like we’re stuck in a long term pattern:

“ Meteorologists warned the heat is here to stay throughout July and that Americans should brace for higher-than-normal temperatures even throughout the rest of the year.”

The same warm pattern we’ve been in the past 4 years. I love it!

It has become cloudy and looks like it could rain here. We really could use some rain.

It was depressing to see all the green on the radar yesterday. It was all around us, but we did not receive a drop.

Little bit of rain this morning did not add to much very muggy outside its great seeing 80’s coming this weekend end this crap!! Im guesesin another poool day out at thee YARDofBRICKS NE of GR hopefully not so many sprites sure don’t want to feel dizzy again getting out the pool ….Stay cool MV’s best INDYPOOL….

Phew! Welcome to day 7 in the 90’s! 37 out of the past 49 days have now been average or above average temps. That’s 76% of the days. Incredible warmth that only looks to continue for at least another few weeks.

What a surprise when I woke up the driveway was wet. Looks like my area had a rain shower just before sun rise and I recorded 0.20″ of rain fall. This is the first rain here since June 27 at my house. The overnight low was 72 and the current temperature is 73 with a DP of 70.
Slim

If the Euro is right then there is a chance we could see several days near or above 100 next week. The GFS is not as hot but still we could see some mid 90’s
Slim

I noticed that as well. Over 100 is beyond hot and becomes dangerous.