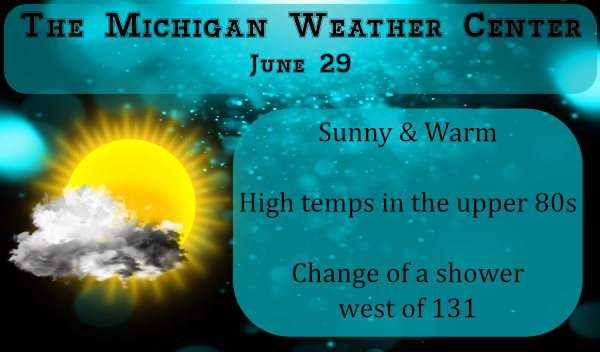 Don’t let the post title get you too excited, scattered means occurring or found at intervals or various locations rather than all together.  There is a 30% chance which means the chance is 30% within 25 miles of any one location.

The probability of precipitation is calculated from the product of two variables. The first variable is “confidence”. How confident is the forecaster precipitation will occur somewhere in their forecast area? This value ranges between 0 (no precipitation possible) to 1 (definitely going to rain) and comes down to the forecaster’s best guess from other data and models.

The second variable is “area affected” or A. This is the percent of the forecast area will receive the precipitation if there is any precipitation. This variable comes down to the forecaster’s best guess again based on models and other data.

Today our best guess with a stationary front in place would be along and west of US131 and south of Grand Rapids.  As you can see there is a lot of guessing going on…

Other than that the heat will continue through the week with temps increasing day by day.  Below is the SPC outlook for today:

88 degrees with a dew point of 70 here. Nothing refreshing about this air mass. Just plain gross out.

Nope… not even a light breeze… UGH!!!

Dry and very warm looks to be the rule for the next week or more. According to Bill Stiffen with light winds this week the lake shore has a good chance of being cooler than the inland areas so if you have a chance if you get too hot and you do not have AC then the lake shore may be where you want to go.
Slim

GR is still at an amazing 83% of total possible sunshine for the month of June and will probably close the month around 84% if I had to guess.

I have not found a lot of information on the percentages of sunshine records but this should be one of the most sunny June’s if not the highest sunshine here in much of west Michigan. The information I have is the average sunshine for June at Grand Rapids is 62.1% and the record is reported as 81.7% in 1963. While that may or may not be true I can say that the driest June’s at Grand Rapids were in 1988, 1959, 1984 and 1908.
Slim

Get ready for more than a week of HOT temps between 88-92 degrees. I love it!