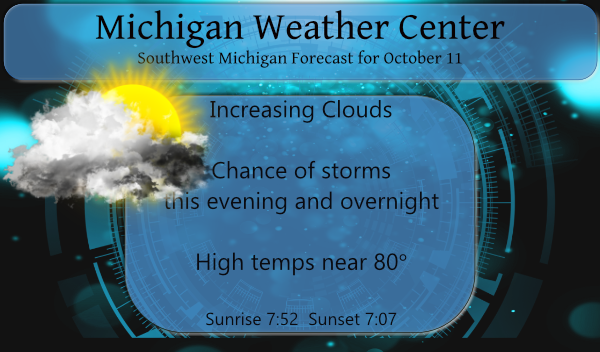 When I stepped outside at 5 am this morning the temp was a summer-like 68° which is above the normal high temp for a mid-October day.  We didn’t make 80° yesterday but we did rise to a pleasant 78° with an overnight low of 62°.  After a few early morning light showers, we saw some clearing late in the day.  Our rainfall was .06 of an inch which brings us to 1.68 inches for the month.

I suspect today may be our last run at 80° for the year though with the CPC guessing above-normal temps for the rest of the month upper 60s and low 70s is not out of the equation.

The SPC has moved the slight risk area for storms further west again:

Had wind, rain and a good amount of lightning and some thunder here about earlier not really severe but it was one of the better storms of this year. It dropped just 0.24″ of rain. At this time it is cloudy here and now it is down to 64. At the airport it is down to 63 and wind gust of 47 MPH was reported there.
Slim

One quick gust, followed by light rain. A few flashes and quiet thunder. “Ya take what cha can get around here”.

I’ve got news for you, Ada will be picking up some substantial rain! Get prepared!

* At 725 PM EDT, severe thunderstorms were located along a line
extending from Benton Harbor to Cassopolis, moving north at 50 mph.

5 months summer, 4+ months of transition weather, 2-3 months of true winter. That’s how things have been playing out lately, and that works just fine for me.

We have basically had 5 straight months of summer-like weather. Around the middle of May up until the middle of October. And no signs of any cold air the rest of this month.
I believe Bill mentioned he thinks December will be the coldest in at least 4 years (not his official forecast, just a comment he made). He made that comment when talking about the high Siberian snow cover. So things could change eventually… but for now we are still stuck in this warm pattern.

Through the first 10 days of October, GR is +10.6 degrees above average. I love long summers!

Geomagnetic storm warning for today. They’re pretty confident this CME will be a direct hit on earth.

70 degrees at 4:30 this morning, 26 degrees above the average low. That is an incredible departure from average!

While no new record highs have been set there now have been several record and near record warmest minimums set in this month.
Slim