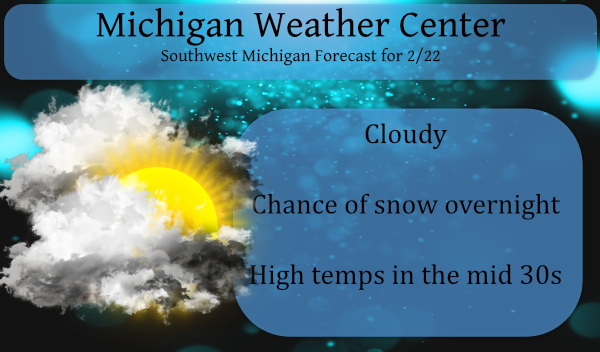 We currently have a temp of 33° this morning at 7 am down from 35° at 3:30, which may be our high for today.  Any snow we had from last night’s system has melted off.  We are approaching the time of year when we transition to spring and perhaps a more turbulent weather pattern where the forces of winter and spring set up their battlegrounds.  This winter has been fairly quiet without any ‘major’ storms or heavy lake effect snow though we have seen more lake effect than we did last year in SW Michigan.  We still have time for more snow and storms, my wife and I were married the first week of March during heavy lake effect snows.  We haven’t had more than six inches of snow during any one storm this season in Otsego.

We can expect temps in the mid-30s to near 40 most of the week and with the help of breezy conditions, this will help melt off the light fluffy snow we have seen over the past couple of weeks.

How ironic that the warm weather nuts keep telling me it was not a good winter for outdoor sports! Facts they are sitting on their duff complaining about the cold and snow and I have been skiing for weeks on end! It was another spectacular day out on the ski trail today! I am not sure I have skied this much in 5 years! Absolutely great winter! Incredible!

Yes and we still have 26 more days of winter left! If the warm weather nuts think the cold and snow is done for the season they are totally delusional!

Busiest the blog has been since the start of February must of got to 30* degrees today!! Who knew?? Lol A 4 season Blogger INDY ….

You could really hear it in Bill’s voice, on his forecast tonight, how down and depressed he was about the warming temps and the realization that we’re heading into spring very quickly! Poor guy, he lives for winter and he barely had one this season!

I saw that too. Bill’s least favorite time of the year is right now. Bring on spring!

Woooh look at all that warmth upcoming!

You’re right MV, this has been another very quiet Winter with no major storms, no blizzards, and once again not much lake effect. It has been several years since the last time the lake effect really amounted to much of anything. Seems rather odd having seen many dumps from the lake over the years, but that’s just the pattern we’ve been in lately. Looks like our 3 week little Winter melts away this week.

Yep, don’t mind 3 week winters at all!! Now, get prepared for a Front Loaded Spring!!

Let’s see what should I do this afternoon? Downhill ski, cross country ski, snowmobile, ice skate, ice fish and luge! Simply a fantastic winter! I absolutely love it!

We got pounded with snow last night! It was a beautiful sight! Keep it coming! More snow tonight!

Outside of the last 2 weeks, we’ve had extremely little snow and snowpack. I love short winters too!

Let the MELT begin! What happened to the polar vortex some on here were saying was returning a week ago? CPC shows nothing but warm temps for the next month and beyond.

On a side note I have a kind of flat roof over a porch and this morning there is water dripping inside of the porch. I know that there must be a water back up there some where so it looks like I will have to get that looked at soon.
Slim

Boy do I love this title of the blog today!!! The temps are already melting the half inch of snow we got last night and we’re looking at multiple days with highs in the 40’s!! Front loaded SPRING is on its way!! Soon we’ll be able to get out and enjoy the fresh WARM air!! Ten day forecast looking outstanding!!!

A little over a inch of wet sloppy snow fall here. The current temperature here is 33. We took a trip up to Bay City yesterday and while there is a solid snow pack across the state of Michigan and it looks like there is about 12″ of snow on the ground until we got east of Midland when the snow depth fell and it looks like around 5 or 6″ or so in the Bay City area. There is a lot of ice on the Saginaw river and there are people snowmobiling and ice fishing on the river.
Slim