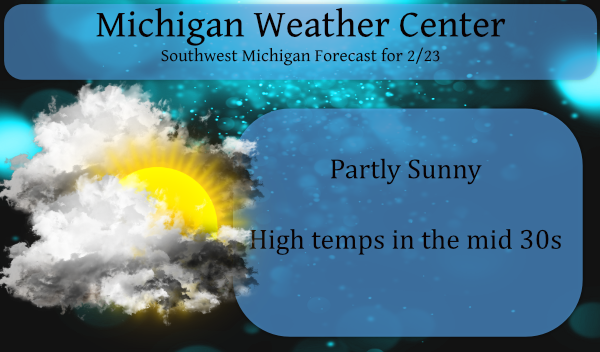 We have a relatively warm 37° in Otsego at 6:30 this morning which is above normal for nighttime lows.  I am almost to the point where I am tiring of having to dress up in a cacoon of multiple layers just to go outside.  On the other hand, one can dress for colder temps but one can only strip to the skin when it is hot then it is a matter of heat tolerance of which I no longer have any.  For me, 37° is ‘almost‘ t-shirt weather.  Of course, my wife is on the other end of the spectrum and hates the cold so we have the battle of the thermostat year around.

This will be another rather mundane day though we should see some sun later.  Along with a stiff westerly breeze, we will continue to see some snow melt which will continue through the week.

It was a beautiful day outside. The warmth from the sun felt great- but if this keeps up and it will I will have to dig out the t-shirts. 🙂

INDY, you’re gonna have to get the Spring fire pit and grill ready early this year! Prepare the outdoor Sprite fridge!!

Is that an early spring blowtorch coming?!

What happened to all this polar vortex talk by Rocky and Indy and Judith Cohen? Incredible!

I know! Gonna have to plan on on getting my spring outdoor projects going earlier!! It’s the most wonderful time of the year!!

What a gorgeous day. The street is like a river. I bet we’ve lost at least three inches of snow today.

Wow! Horrible winter conditions unless you like mushy, old snow and water puddles on shrinking ice.

We went from hard core winter to early spring so quickly this year!

It happened in the blink of an eye!

Man, we’ve got lots of big puddles outside now! That snow pack is really taking a hit!! I love Front Loaded Springs!!

Wow, 44 degrees already in GR! The mets had their temps way too low yet again.

This is the unofficial start of spring for sure. I love short winters and early springs!

This from Brett Anderson at Accuweather “ Signs continue to point toward a slightly warmer-than-normal March across a large portion of eastern North America, while below-normal temperatures may dominate in the West. The reason for this will likely be a persistent trough from northwestern Canada to the western third of the lower 48 states. Even in the west, we are not talking about any sustained period of bitter cold, as the bulk of the Arctic air will be hanging out from the Yukon Territory on over into Siberia. This pattern does favor a moist, southwesterly flow of air that will… Read more »

Well for those who bothered to “mark it down”, might as well erase that mark. Only Tuesday and Gr is already well over 40.

Rocky (Rockford)
Lol we will not see 40 degrees! Maybe more like after a few mid to upper 30’s back down to around freezing or a little below! Mark it down!

Hey Slim, how far below normal are we now for seasonal snowfall???

I believe that. 25.7″ at the Lansing airport just this month. On this side of town, we got six or so inches more than the airport during the big storm. We’ve had 30+” here this month.

WOOD says probably no more measurable snow in February. Wow! That old snow is sure getting dirty and mushy fast. Let it MELT!

Already up to around 45 degrees near me!! Awfully warm by February standards!! That snow pack sure is melting off quickly with that beautiful warm sunshine and gusty winds today!

Crazy no Thunderstorms this winter unlike the last few I’m ready for a good old Thunderstorm miss the sounds of rain lol…4 season Blogger ..INDY

I’m ready for a March polar vortex and a monster snowstorm! Funny how this winter is now below normal with temps as the warm weather fanatics try and tell us otherwise! Incredible!

Yes that to ..INDY

Some fun facts. Todays total daylight is the same as October 17th So far this winter the total snow fall at Grand Rapids is now at 44.8” and that is still 17.2” below average as of this date at GR. While it was mild in December and January it has been much colder in February. The mean for February at this time is 17.0 and that is a departure of -9.1 and the mean for the winter season at this point of 25.8 is actually colder than average (26.6) at this point. The warmest day this year so far is… Read more »

Sunset is now 6:25pm and growing. Loving those later nights!

No January thaws no 50’s or no thunderstorms like previous winters just long lasting snow and cold best ice fishing close to home probably since 2012 for me ….INDY

Is our winter weather over yet? That is what the warm weather fanatics would have you believe! Well I am hear to tell you we will be seeing more cold and snow before this winter can be written in the book! I will be heading up to snow country this weekend for some more great skiing! I have been skiing for months on end! Incredible! What a winter and some amazing Feb snow totals!

Is that your way of saying enjoy the warmth and melting snow all week and no snow? I love it!

Yep, the snow deficits will be getting bigger once again as the average temps start soaring through March! Front Loaded Springs are the best!! Just a very short time now until we can get out and safely enjoy the warm weather!!

Yesterday we surpassed last year’s total snowfall by 1″ – we are now up to 40.5 for the season.

Where’s the snow? Another week this winter with below average snow and mild temps. I love it!

It was a rough 3 week long winter!

A whopping 15″ of snow combined in November, December, and January. The winter that wasn’t…

My old snow blower sure has a work out this winter sounds tired I’m thinking a nice tune up this Fall for old girl!! I can’t believe the snow piles around town it may take them to June to melt crazzy….INDY..

Amazing snow totals and I have used my snowblower at least 6 times! Incredible!