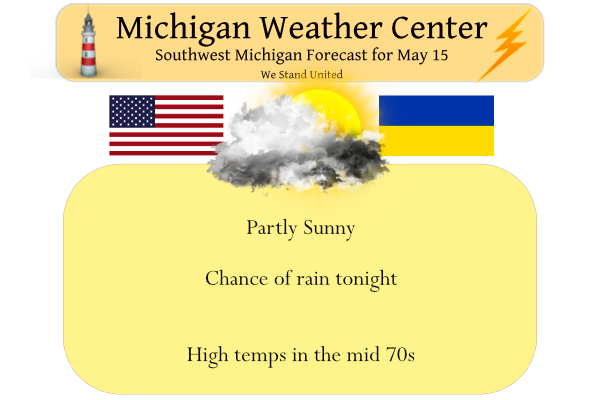 We had no rain here in Otsego yesterday, our high/low was 84° / 59°.  Most of the rain fell in the eastern part of the state, not even a drop here.  We have gone eight days without rain.

The days are getting longer.  As I write this in the early morning, the skies become light before 6 am.  Sunrise today is 6:19 and sunset is at 8:59.  We will continue to incrementally gain daylight through just past midmonth in June (the 21st is the summer solstice).

There is another chance of rain and storms tonight mainly after midnight.  Viewing the lunar eclipse tonight (totality between 1129 PM and 1254 AM) doesn`t look good, but perhaps clouds will be thinner with a couple of breaks far to the northwest.

Wow, the cpc is trending colder the rest of this month! Who would have thought?

Not a big request…just some rain, to wash the pollen away.

Incredible pattern change and cold is coming! Get prepared!

I did the Automated Data Plotter to see which counties have received Severe Thunderstorm Warnings so far this year in Michigan. Here is the latest data. As you can see the most severe weather has been north and east of Grand Rapids. That could potentially change as West Michigan is in the Day 6 outlook for Severe Weather.

Yes definitely worth watching. To early to determine timing or specifics or if we will even get anything but based on the latest looks like all hazard types are on the table.

Forecasted high for Friday is 82 and 65 for Saturday, which coincides with the passage of the front discussed in the Day 6 outlook.

Things that make you go hmmmm..

Yes looks to be a strong system in that timeframe. Latest NWS discussion says dew points near 70 with CAPE values of at least 2,000 J/kg. Of course plenty of time for things to change, but something fun to track regardless!

Today will be our 7th warm day in a row! Our last 5 days have been 13-19 degrees above average!

This sure has been nice stretch of summer weather in May. It feels much better than that wet and cold we had in late April and early May.
Slim

The official H/L at Grand Rapids yesterday was 85/60 At Muskegon it was 83/52 and to the east at Lansing it was 87/63 Lansing officially had 0.35″ of rain. GRR did not record any rain fall. Here at my house I had 0.02″ in a brief but heavy shower. The overnight low here at my house was 53, At the airport it looks to have been 55. At this time there are clouds moving in and it is 61 here.
Slim

You may not see 80 degrees the rest of this month as below normal temps will dominate! Incredible!

Summer is over, so get ready for the COLD! An ice box is coming! Get your furnace cranked up, get your blankets out, fire up the fireplace, get the campfire ready! Wow!