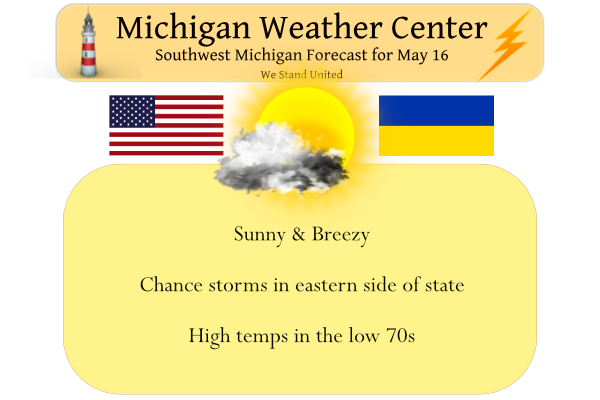 We had .10 of an inch of rain late yesterday which brings our monthly total for May to 2.71 inches.  Yesterday we had a high of 78° and the low was 51°.  We begin a brief cool down today through Wednesday.  Skies will become mostly sunny this morning and it will be breezy. An isolated brief thunderstorm is possible this afternoon generally along a line and east of Lansing to Alma. Mild high temperatures in the mid-60s to low 70’s are predicted.  The relatively mild and breezy conditions today along with low humidity levels will lead to an elevated wildfire fire danger risk.

interestingly the Storm Prediction Center has a 15% chance of severe weather for the Friday timeframe.  They generally don’t go that far out on a limb so it will be interesting if this plays out (see the end of the forecast discussion)

Since we missed the eclipse last night, here’s a quick 1 minute video of the whole thing:
https://youtu.be/dhYpaF9E_bY

I know it was way too cloudy to see the eclipse around here. But today it is nice and sunny.
Slim

Lake Michigan water temps are now above average for this time of year.

From two beach days so far. I was in to my waist, myself. Very doable as long as the air temp is 75+ degrees and it’s sunny.

A few days ago, WOOD was forecasting a high of only 59 for today. At the time, I said it was too cold. It looks like today will actually be in the low 70’s!

The NWS is now guessing that it may only be in the upper 50’s to near 60 on next Sunday. But yes this week looks to be maybe just a little below the average for this time of May.
Slim

GR is going for its 8th straight warm day in a row today! May is now +4 degrees above average.

After a week of nice warm summer like weather (dare I say some would call it hot) we are now back to near to cooler than average few days. There could be a very brief warm up later in the week and maybe a chance of some thunderstorms (severe?) Then back to a cool pattern. Could this up and down be the pattern for the summer time? The official H/L at Grand Rapids yesterday was 76/55 and there was officially 0.05″ of rain fall. The overnight low here at my house was 53. At this time it is sunny and… Read more »

It could also be said that we just had a long hot pattern which could be interrupted by a few cooler days this week before warming up again towards the weekend!

It felt hot Saturday on the links. Very little breeze, 87 and humid.

It’s nice to be able to give the A/C a break and open the windows.

I haven’t had to use my AC yet.