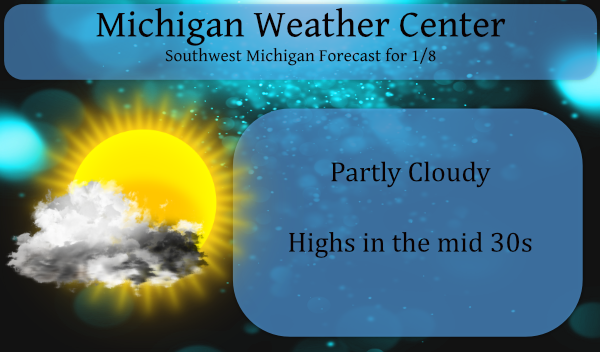 That bright burning sphere in the sky that made an appearance yesterday was just the sun making an appearance after a week of mainly clouds and a lot of blah.  We should be able to bask under its glory for another day or two before the clouds reappear in force once again.

We remain snow-starved in SW Michigan and I am sorry to say I bought new tires for my car yesterday so with that in mind we will probably see another snowless winter.  I bought new all-terrain tires for my truck last year and you all know how last winter turned out.

Looking at the records for Grand Rapids first place for the least snowfall for the season, by the 15th of January, is 7.2 inches in 1906 so if it doesn’t snow by next Friday GRR will hold firm to second place for the least amount of snow for mid-January.

Temps will remain in the low to mid-30s through the weekend and probably right on through most of next week until our Rex block is kicked down and winter is possibly allowed to return to Michigan by later in the week.

Get ready to rock!

The sun has been beautiful to see all day!! With is coming in the windows is sure warmed up the rooms. The dog loved sleeping in what I call sun puddles. Nice sunset. Hope you all enjoyed the day as much as I have.

The 10 day snow maps are trending better and better! Who would have thought?

An Incredible winter storm pattern is setting up! Bring it on!

Well, the simple answer to the question of “how much snow do you need to snowshoe” simply put is: In most cases snow at a depth of 6″ to 8″ or more is typically safe for your snowshoes, and worthwhile to be wearing them. Whereas any less snow could cause damage to your snowshoes or simply make travel more difficult.

Someone sent in a pic of you today! 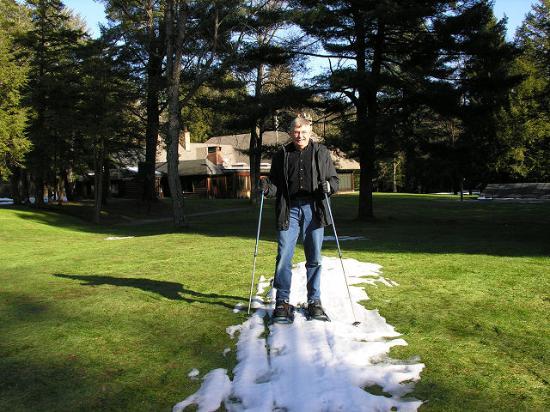 Great winter day!!!! I just got back from a long snowshoe hike! Incredible weather!

Lol!!! You’re so full of it, why would you wear snowshoes in a couple inches of snow?!?! Guess what, I just got back from climbing a glacier in my back yard!

From snowshoeing experts: I’d say the least amount of snow necessary to start snowshoeing is 7-inch. Even with that depth, you may still impose your snowshoes to damage, especially if the terrain is rough or rocky. The ideal condition is 10-inch of snow or more. Such is good enough to allow your snowshoes to grip safely onto the ground. In fact, if the snow is soft and powdery, such depth will make you prone to post-holing without snowshoes. In case you have no idea, post-holing is the condition when your feet sink into the soft powder, requiring you to really… Read more »

While it is nice and sunny here there are reports of lake effect snow falling on the other side of the lake. Also of note here it is January 8th and officially at Grand Rapids it has only gotten below 20 on 4 nights. The unofficial low here at my house was 19 last night but officially at the airport the low was 20.
Slim

The little snow we have is nice and fast for sledding. LOL!!!

Those old records sound pretty sketchy to me.

You know it! Bring on the snow! By this time next week the transition to a new pattern will be in progress! Rock n Roll will never die!

We have 5 vehicles so yes one of them usually needs new tires. Why don’t you tell us again about all the snow we’re getting. Oh wait, it only snows in “your area”. LOL!

Still a sold 3 to 4 inches of snow on the ground and loving it!

GR has melted down to only 2″ of snow now. Let the warmth and no snow continue!

Don’t worry, those people that purchased new snow tires and snow blowers will be very happy they did. We will be getting absolutely hammered with cold and snow before this winter is over! Get prepared now!

Yes back loaded Winter why not …. HAPPY NEW YEAR INDY ….

Same here MV. I bought new tires last year for our car, and back in October I bought a set of expensive Michelin’s for our GMC. This Winter I have yet to drive on a road with more than 1 inch of snow on it and the tires already have over 3000 miles on them. Funny how that works.